Comments (0)
Add to wishlistDelete from wishlist
Cite this document
Summary
Q1. Business cycle is a major economic phenomenon that poses challenges and problems to economists in their attempt to stabilize the economic growth rate and stability. Each economy faces the changes in economic cycles that results in instability and brings different economic…
Download full paperFile format: .doc, available for editing
HIDE THIS PAPERGRAB THE BEST PAPER94.1% of users find it useful 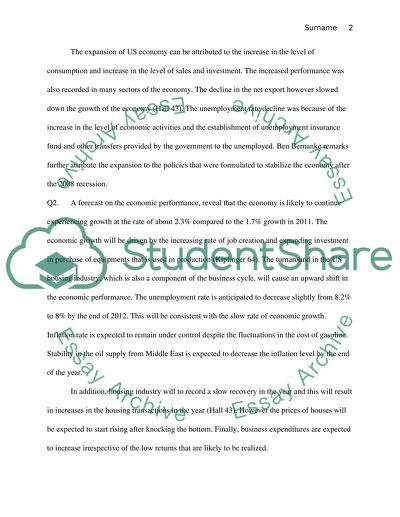 Business Cycles Q1. Business cycle is a major economic phenomenon that poses challenges and problems to economists in their attempt to stabilize the economic growth rate and stability. Each economy faces the changes in economic cycles that results in instability and brings different economic problems. During the recession for instance, the rate of unemployment rises and the inflation rate declines (Stock and Watson 56). The period is characterized by low level of investments and decline in the GDP.
Considering the data of US in 2012, US can be said to be in the expansion cycle. Expansion cycle is the upward movement from the recession and the subsequent rise up to the next peak (Moore 36). This is because of the increase in the GDP accompanied by the decline in the number of unemployed population. The unemployment rate is estimated to remain stable between 8.2%-8.5percent by the end of the year (Kennedy 23). In 2012, the US GDP was $ 15880.21 billion and a GDP growth rate of 2.872. US economy as per now records increases in the inflation level, which means that the rate of spending and prices of goods are on the rise (Stock and Watson 56). Another feature that makes US economy be at the expansion cycle is the fact that the output level has increased and thus translating into an increase in the export level to other nations. Consequently, the US dollar is stable against other major currencies.
The expansion of US economy can be attributed to the increase in the level of consumption and increase in the level of sales and investment. The increased performance was also recorded in many sectors of the economy. The decline in the net export however slowed down the growth of the economy (Hall 43). The unemployment rate decline was because of the increase in the level of economic activities and the establishment of unemployment insurance fund and other transfers provided by the government to the unemployed. Ben Bernanke remarks further attribute the expansion to the policies that were formulated to stabilize the economy after the 2008 recession.
Q2. A forecast on the economic performance, reveal that the economy is likely to continue experiencing growth at the rate of about 2.3% compared to the 1.7% growth in 2011. The economic growth will be driven by the increasing rate of job creation and expanding investment in purchase of equipments that is used in production (Kiplinger 64). The turnaround in the US housing industry, which is also a component of the business cycle, will cause an upward shift in the economic performance. The unemployment rate is anticipated to decrease slightly from 8.2% to 8% by the end of 2012. This will be consistent with the slow rate of economic growth. Inflation rate is expected to remain under control despite the fluctuations in the cost of gasoline. Stability in the oil supply from Middle East is expected to decrease the inflation level by the end of the year.
In addition, housing industry will to record a slow recovery in the year and this will result in increases in the housing transactions in the year (Hall 43). However the prices of houses will be expected to start rising after knocking the bottom. Finally, business expenditures are expected to increase irrespective of the low returns that are likely to be realized.
The US economy is therefore expected to remain in the expansion phase throughout the year 2012. Fed must continue to formulate policies that will ensure stability in the economic performance and increase in the level of economic growth.
Works Cited
"Economic Outlook, Indicators, Forecasts - Your Business." Kiplinger - Personal Finance, Business, Investing, Retirement, and Financial Advice. N.p., n.d. Web. 22 Apr. 2012. .
Hall, James. " » US Economic Forecast for 2012 and the Election Year Cycle Alex Jones Infowars: Theres a war on for your mind!." Alex Jones Infowars: Theres a war on for your mind!. N.p., n.d. Web. 22 Apr. 2012. .
Kennedy, Joseph V. . "The Economic Outlook for 2012 and Beyond - Business Review USA." US Business Magazine | Stock Market and Finance News | USA Business Information | Business Review USA. N.p., n.d. Web. 22 Apr. 2012. .
Moore, Geoffrey Hoyt. Business Cycle Indicators. Princeton [N.J.: Princeton University Press, 2001. Print.
Stock, James H., and Mark W. Watson. Business cycle fluctuations in US macroeconomic time series. Cambridge, Mass.: National Bureau of Economic Research, 2008. Print.
Top of Form
Bottom of Form Read More
Share:
Tags
Cite this document
(“Macro : Business Cycles Essay Example | Topics and Well Written Essays - 500 words”, n.d.)
Retrieved from https://studentshare.org/macro-microeconomics/1594729-macro-business-cycles

...Economics Economics Business cycles represent the regular swings or fluctuations that occur in a country’s economic growth and the long-term trends exhibited in the growth rate of total production. It also entails the economic expansions and contractions of the overall business activity evidenced by changes in the GNP, GDP, unemployment rates, and inflation (Hirschey, 2009). Conversely, cyclical economic variation is a type of cyclical fluctuation defined by irregular phases of economic expansions or upswings and contractions or downswings that last for over a year from the peak to the trough of a cycle. During the period of economic contraction, the consumer and business demand declines. However, during expansion, the demand increases...
2 Pages(500 words)Essay

Issues of intellectual property protection, Issues of plundering knowledge, Issues of losing brain cheaply, Issues of a new colony, etc are some of the major issues to be considered when we consider China as a knowledge economy. These issues are really complicated and have more depth than we anticipate. Common wellbeing is the major aim of the economic reforms in China today. In fact, all the countries have the same motto; living and working together for the common good, enabling cooperation and mutual prosperity to coexist with healthy and fair competition. Since China is a heavily populated country, balancing the interests of a huge population is a difficult task; but it is necessary to avoid any social, economical, political or...
6 Pages(1500 words)Assignment

9 Pages(2250 words)Case Study
sponsored ads
Save Your Time for More Important Things
Let us write or edit the essay on your topic "Macro : Business Cycles" with a personal 20% discount.
GRAB THE BEST PAPER

Let us find you another Essay on topic Macro : Business Cycles for FREE!