Comments (0)
Add to wishlistDelete from wishlist
Cite this document
Summary
Business cycles can be defined as larger fluctuations in the economic activities or in the production of goods and services over a long period of time. It is sometimes known as economic cycle and is often associated with periods of high economic growth…
Download full paperFile format: .doc, available for editing
HIDE THIS PAPERGRAB THE BEST PAPER96.3% of users find it useful 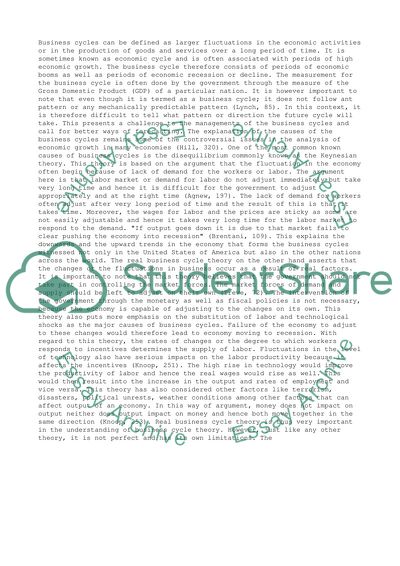 Extract of sample "How U.S. Government and regulatory bodies can manage business cycles"

Download file to see previous pages Business cycles can be defined as larger fluctuations in the economic activities or in the production of goods and services over a long period of time. It is sometimes known as economic cycle and is often associated with periods of high economic growth. The business cycle therefore consists of periods of economic booms as well as periods of economic recession or decline. The measurement for the business cycle is often done by the government through the measure of the Gross Domestic Product (GDP) of a particular nation. It is however important to note that even though it is termed as a business cycle; it does not follow ant pattern or any mechanically predictable pattern (Lynch, 85). In this context, it is therefore difficult to tell what pattern or direction the future cycle will take. This presents a challenge to the managements of the business cycles and call for better ways of forecasting. The explanation of the causes of the business cycles remains some of the controversial issues in the analysis of economic growth in many economies (Hill, 320). One of the most common known causes of business cycles is the disequilibrium commonly known as the Keynesian theory. This theory is based on the argument that the fluctuation in the economy often begin because of lack of demand for the workers or labor. The argument here is that labor market or demand for labor do not adjust immediately but take very long time and hence it is difficult for the government to adjust appropriately and at the right time (Agnew, 197). The lack of demand for workers often adjust after very long period of time and the result of this is that it takes time. Moreover, the wages for labor and the prices are sticky as some are not easily adjustable and hence it takes very long time for the labor market to respond to the demand. “If output goes down it is due to that market fails to clear pushing the economy into recession” (Brentani, 109). This explains the downwards and the upward trends in the economy that forms the business cycles witnessed not only in the United States of America but also in the other nations across the world. The real business cycle theory on the other hand asserts that the changes or the fluctuations in business occur as a result of real factors. It is important to note that this theory believes that the government should not take part in controlling the market forces. The market forces of demand and supply should be left to adjust on their own (Treve, 72). The intervention of the government through the monetary as well as fiscal policies is not necessary, because the economy is capable of adjusting to the changes on its own. This theory also puts more emphasis on the substitution of labor and technological shocks as the major causes of business cycles. Failure of the economy to adjust to these changes would therefore lead to economy moving to recession. With regard to this theory, the rates of changes or the degree to which workers responds to incentives determines the supply of labor. Fluctuations in the level of technology also have serious impacts on the labor productivity because it affects the incentives (Knoop, 251). The high rise in technology would improve the productivity of labor and hence the real wages would rise as well. This would then result into the increase in the output and rates of employment and vice versa. This theory has also considered other factors like terrorism, disasters, political unrests, weather conditions among other factors that can affect output of an economy. In this way of argument, money does not impact on output neither does output impact on money and hence both move together in the same direction (Knoop, 253). Real business cycle theory is thus very important in the understanding of business cycle theory. However, just like any other theory, it is not perfect and has its own limitations. The ...Download file to see next pagesRead More
Share:
Tags
Cite this document
(“How U.S. Government and regulatory bodies can manage business cycles Essay”, n.d.)
Retrieved de https://studentshare.org/business/1421303-how-us-government-and-regulatory-bodies-can-manage-business-cycles
(How U.S. Government and Regulatory Bodies Can Manage Business Cycles Essay)
https://studentshare.org/business/1421303-how-us-government-and-regulatory-bodies-can-manage-business-cycles.
“How U.S. Government and Regulatory Bodies Can Manage Business Cycles Essay”, n.d. https://studentshare.org/business/1421303-how-us-government-and-regulatory-bodies-can-manage-business-cycles.
Comments (0)
Click to create a comment or rate a document

CHECK THESE SAMPLES OF How U.S. Government and regulatory bodies can manage business cycles

While each force of globalization is important, the technological revolution has impacted the business models, value creation and differentiation (Spelman, 2010). The cloud computing technologies that have made the popular social networking applications possible are now being applied to development, healthcare, and society. Today mobile telephones are more like powerful computers that take care of many of the societal challenges facing both developed and developing countries (Evans, 2010). In Chile, new software enables weather information to farmers who can now make informed decisions on when and how to sow or harvest the crops. However, the fear or ignorance of cloud computing technology could harm the chances of the SMEs becomi...
7 Pages(1750 words)Coursework
sponsored ads
Save Your Time for More Important Things
Let us write or edit the essay on your topic "How U.S. Government and regulatory bodies can manage business cycles" with a personal 20% discount.
GRAB THE BEST PAPER

Let us find you another Essay on topic How U.S. Government and regulatory bodies can manage business cycles for FREE!