Comments (0)
Add to wishlistDelete from wishlist
Cite this document
Summary
The European Union’s inability to handle the debt crisis in Greece is shaking the financial markets across the entire continent. The impacts of the debt crisis are being felt across the money, valuing of capital and derivatives…
Download full paperFile format: .doc, available for editing
HIDE THIS PAPERGRAB THE BEST PAPER95.6% of users find it useful 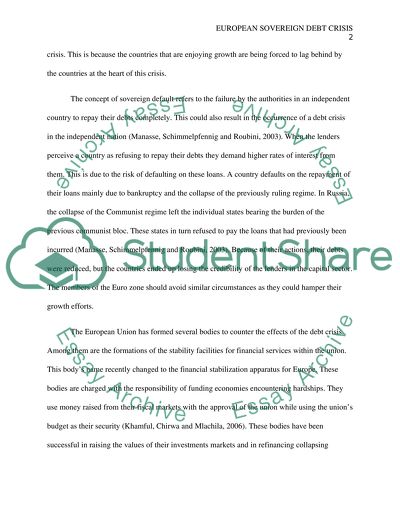 Task European Sovereign Debt Crisis The European Union’s inability to handle the debt crisis in Greece is shaking the financial markets across the entire continent. The impacts of the debt crisis are being felt across the money, valuing of capital and derivatives. The euro’s value is deteriorating on a daily basis and the costs involved in protecting commercial bonds are on the increase. The values of capital goods have also been on the decline around the globe. There has been an increase in the investors’ fear concerning the market trends around Europe (Eichengreen, 2002). There is a growing concern among the investors that the union will not be able to keep these impacts from spreading throughout the continent. Major investors such as French banks have been withdrawing their presence from Greece due to the fears they have in the economy.
The debt crisis has had many implications on various markets ranging from bonds, gold, equity, forex and other derivatives. The crisis resulted in the underwriting of bonds since many financial institutions had purchased them from the weak economies within the union. These countries in return did offer little premiums that seemed secure (Eichengreen, 2002). These bonds continued to pose more risks as the effects of the debt crisis worsened. The prices of gold, forex, equity and other stocks across the union have also been undervalued because of the debt crisis. This is because the countries that are enjoying growth are being forced to lag behind by the countries at the heart of this crisis.
The concept of sovereign default refers to the failure by the authorities in an independent country to repay their debts completely. This could also result in the occurrence of a debt crisis in the independent nation (Manasse, Schimmelpfennig and Roubini, 2003). When the lenders perceive a country as refusing to repay their debts they demand higher rates of interest from them. This is due to the risk of defaulting on these loans. A country defaults on the repayment of their loans mainly due to bankruptcy and the collapse of the previously ruling regime. In Russia, the collapse of the Communist regime left the individual states bearing the burden of the previous communist bloc. These states in turn refused to pay the loans that had previously been incurred (Manasse, Schimmelpfennig and Roubini, 2003). Because of their actions, their debts were reduced, but the countries ended up losing the credibility of the lenders in the capital sector. The members of the Euro zone should avoid similar circumstances as they could hamper their growth efforts.
The European Union has formed several bodies to counter the effects of the debt crisis. Among them are the formations of the stability facilities for financial services within the union. This body’s name recently changed to the financial stabilization apparatus for Europe. These bodies are charged with the responsibility of funding economies encountering hardships. They use money raised from their fiscal markets with the approval of the union while using the union’s budget as their security (Khamful, Chirwa and Mlachila, 2006). These bodies have been successful in raising the values of their investments markets and in refinancing collapsing economies. This has been enabled by the use of shortage cuts in countries such as Portugal and her neighbor Spain.
This crisis will affect the financial landscape by bringing deficits in the financial sector. It will hamper the growth and development efforts across various countries in the Euro zone. Because of this trend, there is going to be a rise in the unemployment levels and inflation rates will be on the rise.
References
Eichengreen, B., 2002, The International Debt Crisis in Historical Perspective, MIT Press, Washington.
Manasse, P, and Schimmelpfennig, A, and Roubin, N., 2003, Predicting Sovereign Debt Crisis, International Monetary Fund.
Khamful, Y, Chirwa, E, and Mlachila. M, 2006, Donor Herding and Domestic Debt Crisis,
Issues 2006-2109. International Monetary Fund. Read More
Share:
Tags
Cite this document
(“European Sovereign Debt Crisis Essay Example | Topics and Well Written Essays - 500 words”, n.d.)
European Sovereign Debt Crisis Essay Example | Topics and Well Written Essays - 500 words. Retrieved from https://studentshare.org/macro-microeconomics/1584566-european-sovereign-debt-crisis

Fundamental rights had been traced to several ancient documents which date signify that even in those ancient eras fundamental rights had already been practiced and recognized and that the concept was alive and respect for such rights existed thousands of years ago. The Cyrus Cylinder which can be found in the British Museum in London shows that during 539 BC, Cyrus the Great of Persia believed in the fundamental human rights of his own citizens as well as captive citizens of Babylonia which he conquered in 539 BC. The Cyrus Cylinder was actually Cyrus’ declaration of reforms and described how Cyrus repatriated displaced peoples such as the Jews who were deported and exiled by the Babylonian king Nebuchadnezzar in 6th centur...
66 Pages(16500 words)Dissertation

The author mentions in this regard to the revolution in Paris, which gave birth to the Second Empire under Napoleon Bonaparte. Harvey (2008) observes that the revolution caused due to surplus capital and labor paved the way for infrastructural development throughout Europe, which created roads, railway networks, and harbors.
Brenner and Theodore (2002) observe that the combined effects of growth capital and labor relations, competition between the capitalist regimes, financial and fiscal regulations, power of the state and a move to become international paved the way for neoliberalism during the 1980 period. To this extent, Brenner and Theodore (2002) and Peck and Tickell (2002) states that the urban hemisphere is becoming t...
7 Pages(1750 words)Literature review

During late 2007, a massive economic recession hit the entire world and most of the countries have experienced its negative consequences. The recession can be identified by decreasing GDP and industrial production and increasing unemployment. In such situations, the regulators of economy, formulate and implement effective policies to overcome recession as soon as possible. In this respect, the regulator of the c...
6 Pages(1500 words)Coursework
sponsored ads
Save Your Time for More Important Things
Let us write or edit the essay on your topic "European Sovereign Debt Crisis" with a personal 20% discount.
GRAB THE BEST PAPER

Let us find you another Essay on topic European Sovereign Debt Crisis for FREE!