Comments (0)
Add to wishlist Delete from wishlist
Cite this document
Summary
This paper "Financial Crisis and Construction Sector" focuses on the fact that financial crisis affected two sectors most i.e. the financial services and the property market because both the sectors were directly linked in the way the financing of the property projects were done. …
Download full paper File format: .doc, available for editing
HIDE THIS PAPERGRAB THE BEST PAPER98.5% of users find it useful 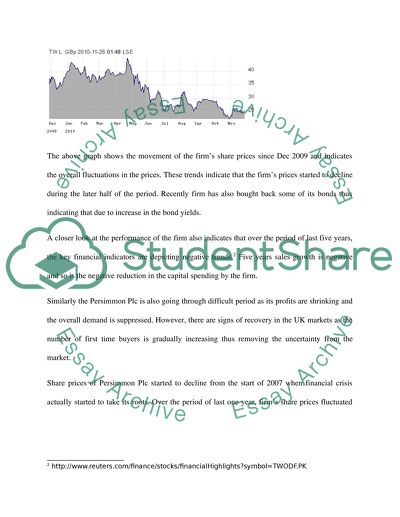 Download file to see previous pages When the borrowers started to default, firms have to repossess the houses and ultimately started a chain reaction which forced the prices of the housings down and as such the whole sector started to look vulnerable to the low prices and lack of demand.

Two major players in the UK market include Taylor Wimpey and Persimmon Plc- both the firms are leading players in the UK. During the current recession, the overall demand for the products of both firms was significantly affected owing to the high cost of operating and low demand. What is also evident that both the firms were affected by the level of debt they have acquired and were able to rationalize the same during the financial crisis period? Both the firms announced the job cuts as well as further announced the plans for drastic cost reduction as well as the rationalization of their debt level.

The above graph shows the movement of the firm’s share prices since Dec 2009 and indicates the overall fluctuations in the prices. These trends indicate that the firm’s prices started to decline during the latter half of the period. Recently the firm has also bought back some of its bonds thus indicating that due to an increase in the bond yields.
A closer look at the performance of the firm also indicates that over the period of last five years, the key financial indicators are depicting negative trends.2 Five years sales growth is negative and so is the negative reduction in the capital spending by the firm.

Similarly, the Persimmon Plc is also going through a difficult period as its profits are shrinking and the overall demand is suppressed. However, there are signs of recovery in the UK markets as the number of first-time buyers is gradually increasing thus removing the uncertainty from the market.
Share prices of Persimmon Plc started to decline from the start of 2007 when the financial crisis actually started to take its roots. Over the period of last one year, the firm’s share prices fluctuated within the range of 335-444 indicating that the overall sentiments of the investors towards this company are not favourable.   ...Download file to see next pages Read More
Share:
Tags
Cite this document
(Financial Crisis and Construction Sector Case Study, n.d.)
Financial Crisis and Construction Sector Case Study. Retrieved from https://studentshare.org/macro-microeconomics/1573287-briefing-report-on-the-effect-of-the-financial-crisis-on-the-construction-sector-comparison-of-different-measures-of-corporate-performance-within-the-construction-sector-between-2001-till-2010-in-usa-uk-and-chinabonds-equities-etc

CHECK THESE SAMPLES OF Financial Crisis and Construction Sector

... not allocate the loss proportionally was the crux of the issue. (Blackler 2008). Hence, in Camford University project work, I wish to advise that it is wise to follow the decision made in the City Inn case and to grant time extension to the contractor. 2. Antiquities It is better to add clauses in JCT contract as regards to contractual provision concerning with the finding antiquity objects during the course of a contract work for varied reasons. One has to be careful in regard to antiquity object as disturbance or removal of such antiquity from their original site may deteriorate their value. For instance, during the construction of a very expensive and large project in London, Shakespeare’s Globe theatre was found and this had delayed...
13 Pages (3250 words) Essay

The pragmatic parallel mixed methods design was adopted for the study using the questionnaire, structured interview guide and content analysis were the primary instruments utilized in the collection of data. A total of 500 respondents participated in the study. These respondents represented the five sectors considered in the study, namely: the community residents, SEC employees, SEC managers, personnel from other establishments (i.e., the marketplace) and the government.  A combination of sampling techniques was used in this study: stratified random sampling, for the community respondents and SEC employees; simple random sampling, for the respondents of other companies; and purposive sampling for SEC managers and a representa...
88 Pages (22000 words) Case Study
sponsored ads
Save Your Time for More Important Things
Let us write or edit the case study on your topic "Financial Crisis and Construction Sector" with a personal 20% discount.
GRAB THE BEST PAPER

Let us find you another Case Study on topic Financial Crisis and Construction Sector for FREE!