Comments (0)
Add to wishlistDelete from wishlist
Cite this document
Summary
This paper "Is the UK Recovering from Recession" discusses the recent financial crisis that brought a wave of distress and wreaked havoc on global economies. All the major countries of the world suffered adversely from this financial shock and have been languishing in the dark for a long spell…
Download full paperFile format: .doc, available for editing
HIDE THIS PAPERGRAB THE BEST PAPER96.3% of users find it useful 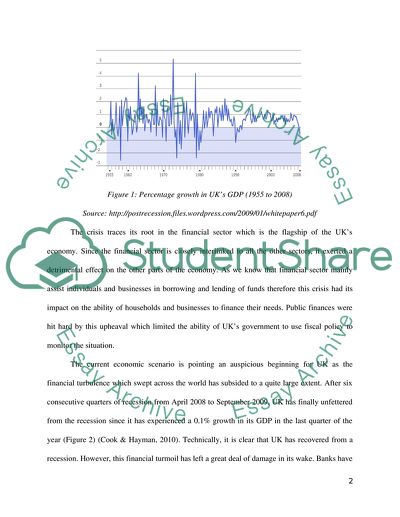 Extract of sample "Is UK Recovering from Recession"

Download file to see previous pages The wealth of the households residing in the UK had increased drastically mainly because of the housing bubble and an increase in the stock market. Aggregate demand nurtured the level of employment with its major portion stemming from the public sector. However, the recent financial turmoil undermined the economy and it was forced to sink into a serious recession.

The percentage increase in the GDP of the UK had been stable over the past decade. According to the data it has been observed that a recessionary phase has been experienced almost after 18 years; the last time it was observed in the 90’s which is evident from Figure 1. As we know, recessions are marked by a percentage decrease in GDP generally over two to three quarters thus we can draw a valid inference from the figure that the UK plunged into the recession in the year 2008.

CHECK THESE SAMPLES OF Is UK Recovering from Recession

...1. Assess the key macro factors that have influenced the UK grocery retailing industry since the early 1960s. The concept of organisational change is inherently intertwined with external threats and opportunities, which businesses must adapt to as part of strategic planning to continue long term growth. Senior and Fleming argue that the concept of organisational change has many faces, namely “convergent changes and transformational change that is organisation wide and characterised by radical shifts in strategy, mission values and associated changes of structures and systems” (In Thompson & Martin, 2005, p.41). Moreover, Johnson et al highlight that external macro-economic factors intrinsically impact strategy management and without...
13 Pages(3250 words)Assignment

As a result, there is considerable debate over whether world economies will gravitate toward adopting a common Anglo-American corporate governance structure or will...
84 Pages(21000 words)Dissertation
sponsored ads
Save Your Time for More Important Things
Let us write or edit the case study on your topic "Is UK Recovering from Recession" with a personal 20% discount.
GRAB THE BEST PAPER

Let us find you another Case Study on topic Is UK Recovering from Recession for FREE!