Changes in the Latest Federal Budget the US - Case Study Example

Comments (0)
Add to wishlistDelete from wishlist
Cite this document
Summary
This case study expansive present the current budget changes requested and the position will either be defended or refuted. Several changes have been made in the latest Federal budget; one of the most significant changes has been the cancellation of family payments…
Download full paperFile format: .doc, available for editing
HIDE THIS PAPERGRAB THE BEST PAPER92.4% of users find it useful 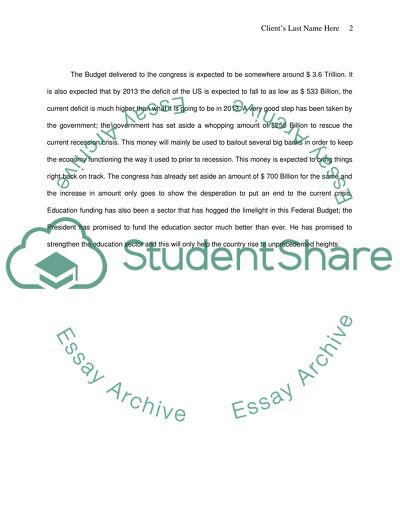 Extract of sample "Changes in the Latest Federal Budget the US"

Client’s 22 June 2009 The President of the US is responsible for presenting federal documents to the US Congress and the same gives anaccount of the funding recommendations for the following Fiscal year, this funding includes all major expenditures and the same is called as the Federal Budget. This paper will expansive present the current budget changes requested and the position will either be defended or refuted.
Several changes have been made in the latest Federal budget; one of the most significant changes has been the cancellation of family payments. The same will severely affect the people who earn less money, the US government will save a lot of money by taking this step, instead of giving the money to poor families the government will keep that money intact using it for other purposes. There has been a lot of hue and cry about the same and it is unfair to withdraw support, the poor people must not be left all on their own the government must help them in every possible way.
“It is also believed that more than one million higher income earners will also be worse off as a result of the Governments changes to the private health insurance rebate, announced in last nights Budget. Under changes to family tax benefit A, from July low-income families earning less than $42,000 a year will lose 35c per week - $18 a year - for each child aged under 12, and $26 a year for each child aged 13 to 15.” (Changes to Family Tax)
The Budget delivered to the congress is expected to be somewhere around $ 3.6 Trillion. It is also expected that by 2013 the deficit of the US is expected to fall to as low as $ 533 Billion, the current deficit is much higher than what it is going to be in 2013. A very good step has been taken by the government; the government has set aside a whopping amount of $250 Billion to rescue the current recession crisis. This money will mainly be used to bailout several big banks in order to keep the economy functioning the way it used to prior to recession. This money is expected to bring things right back on track. The congress has already set aside an amount of $ 700 Billion for the same and the increase in amount only goes to show the desperation to put an end to the current crisis. Education funding has also been a sector that has hogged the limelight in this Federal Budget; the President has promised to fund the education sector much better than ever. He has promised to strengthen the education sector and this will only help the country rise to unprecedented heights.
Conclusion
The president is a very ambitious man and he certainly knows his traits well, first and foremost it is very important to put an end to recession so as to ensure that everything is carried out smoothly once again, in addition to this the Federal budget has brought a lot of promise but we have to wait and watch whether these promises will be fulfilled or not.

“Changes in the Latest Federal Budget the US Case Study - 1”, n.d. https://studentshare.org/macro-microeconomics/1555893-essay-response.
Comments (0)
Click to create a comment or rate a document

Law Changes on the Horizon

In so far as Treeng is concerned, the Articles of Association allow the Directors the right to outright refuse a transfer of shares. However, there is also a definite time period that has been specified for the directors to give notice of their intent to refuse the transfer of shares.
In Bill’s case, it may be noted that the transfer has occurred four months ago and in the two month period following the transfer, the Directors have not provided any indication that they intend to refuse the transfer. Therefore, it is likely that since no reasons have been provided to support a refusal2, and no notification of any kind has been provided to Bill that the share transfer has been refused, the natural assumption that must be...
7 Pages(1750 words)Case Study

1. Th...
7 Pages(1750 words)Case Study
sponsored ads
Save Your Time for More Important Things
Let us write or edit the case study on your topic "Changes in the Latest Federal Budget the US" with a personal 20% discount.
GRAB THE BEST PAPER

Let us find you another Case Study on topic Changes in the Latest Federal Budget the US for FREE!