Comments (0)
Add to wishlistDelete from wishlist
Cite this document
Summary
This paper "In Defense of Globalization - International Trade and Free Markets" focuses on globalization and free trade that have been the keywords of the past century and they have been ascribed as the reasons for the emergence of the existing developed world. …
Download full paperFile format: .doc, available for editing
HIDE THIS PAPERGRAB THE BEST PAPER94.3% of users find it useful 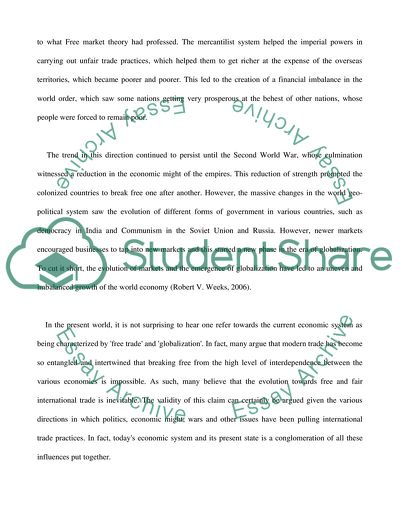 Download file to see previous pages One of the most important provisions under neoliberalism has been international trade and free markets. This concept of free and market-based economies can be traced back to more than 200 years back when the idea was born during the years of the Industrial Revolution. Evidence of the emergence of this idea can be traced to the discussion of such ideas in a book titled The Wealth of Nations by Adam Smith in 1776, which professed that in order to attain maximum efficiency, any form of intervention into the working of the market had to be withheld by the government and all kinds of taxes and surcharges on manufacturing and commerce had to be done away with. Given the old practices of the olden days, such new and innovative ideas were immediately opposed, due to which, free markets had to be introduced by force.
The introduction of free markets led to a strong growth of the economies of the countries (especially the ones in Europe) that were undergoing the industrial revolution. However, the booming trade and the discovery of new lands prompted these nations to promote trade overseas, which did not go according to what Free market theory had professed. The mercantilist system helped the imperial powers in carrying out unfair trade practices, which helped them to get richer at the expense of the overseas territories, which became poorer and poorer. This led to the creation of a financial imbalance in the world order, which saw some nations getting very prosperous at the behest of other nations, whose people were forced to remain poor.
The trend in this direction continued to persist until the Second World War, whose culmination witnessed a reduction in the economic might of the empires. This reduction of strength prompted the colonized countries to break free one after another. However, the massive changes in the world geopolitical system saw the evolution of different forms of government in various countries, such as democracy in India and Communism in the Soviet Union and Russia.    ...Download file to see next pagesRead More
Share:
Tags
Cite this document
(“In Defense of Globalization - International Trade and Free Markets Essay - 1”, n.d.)
In Defense of Globalization - International Trade and Free Markets Essay - 1. Retrieved from https://studentshare.org/macro-microeconomics/1546802-would-it-be-conceivable-for-all-nations-to-agree-upon-and-ratify-a-comprehensive-code-to-govern-international-trade-in-the-not-too-distant-future-examine-all

The process of migration and technology transfer use the term globalisation to refer to national economies’ integration into a global economy. When economists use this term, then by this word he wants to imply a removal of national barriers for facilitating the flows of goods and services, labour and capital from one country to another. (Bhagwati, 2004; Steger, 2003)
The process of globalisation is actually made up of two phases. In the first phase, most of the countries are integrated economically. The principal action that is conducted during this first phase is to make negotiations of world trade by reducing protectionism. In this phase, all products get access to a wide global market. The second phase of the globali...
7 Pages(1750 words)Coursework

The attempts by foreign investments to penetrate China’s market have proven futile in the past especially due to the conservative nature of the inhabitants. China is a strict country when it comes to culture and cultural interaction. For ex...
7 Pages(1750 words)Coursework
sponsored ads
Save Your Time for More Important Things
Let us write or edit the essay on your topic "In Defense of Globalization - International Trade and Free Markets" with a personal 20% discount.
GRAB THE BEST PAPER

Let us find you another Essay on topic In Defense of Globalization - International Trade and Free Markets for FREE!