The World Without WTO - Coursework Example

Comments (0)
Add to wishlistDelete from wishlist
Cite this document
Summary
The paper "The World Without WTO" discusses that to create a more just and sustainable trade and investment environment, it is essential for the WTO to make itself more open and transparent, more democratic. It has to bring significant changes in the set of rules it is built upon…
Download full paperFile format: .doc, available for editing
HIDE THIS PAPERGRAB THE BEST PAPER97.2% of users find it useful 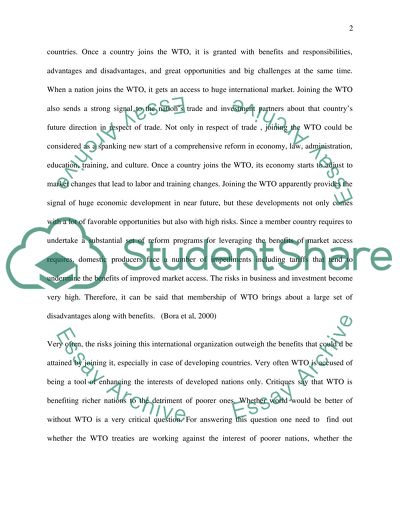 Extract of sample "The World Without WTO"

CHECK THESE SAMPLES OF The World Without WTO

Is WTO a Necessasity for Global Trade

Business and Management about WTO

6 Pages(1500 words)Article
sponsored ads
Save Your Time for More Important Things
Let us write or edit the coursework on your topic "The World Without WTO" with a personal 20% discount.
GRAB THE BEST PAPER

Let us find you another Coursework on topic The World Without WTO for FREE!