Comments (0)
Add to wishlistDelete from wishlist
Cite this document
Summary
This essay "Gazprom - One of the Largest Gas Producing Companies of Russia" focuses on Gazprom which is one of the largest gas producing companies in Russia and is jointly owned by the state and the other institutions. Datamonitor (2007) mention that the company operates primarily through its subsidiaries. …
Download full paperFile format: .doc, available for editing
HIDE THIS PAPERGRAB THE BEST PAPER98.5% of users find it useful 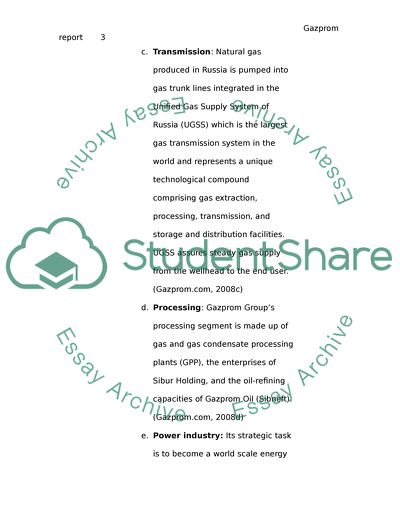 Download file to see previous pages UGSS assures steady gas supply from the wellhead to the end user. (Gazprom.com, 2008c)
d. Processing: Gazprom Group’s processing segment is made up of gas and gas condensate processing plants (GPP), the enterprises of Sibur Holding, and the oil-refining capacities of Gazprom Oil (Sibneft). (Gazprom.com, 2008d)
e. Power industry: Its strategic task is to become a world scale energy production company with one whole chain – from production to sales – not only gas but also liquid hydrocarbons as well as producing a wide range of end products, electrical power being just one of such. (Gazprom.com, 2008e)
The global strategy of Gazprom is to become the largest in the world for producing and distributing gas to the entire world so that appropriate amount of utilization of the natural resources can be done. Datamonitor (2007) states that 2006 was the first year after Gazprom’s share market liberalization. During this period, OAO "Gazprom" capitalization increased by over 70 % and amounted to $270 billion at the end of the year.
Gazprom has been developing a unique resource base, production capacities and pipeline system. This effort take taken the company as the world’s most reliable energy resource suppliers to enterprises, organizations, and individuals. They are devoted to a specialized and accountable advance towards the development of these resources and the supply of the markets both in Russia and globally.
Gazprom is engaged in research and development activities to strategize important energy resources in cooperation with the most successful and responsible international energy companies. This makes them quite strong in their operations base and marks the strength of their strategy for further growth.
Gazprom is constantly pursuing its business globalization strategy, and actively increasing the supply to the entire globe for its gas production. In 2006, the company supplied liquefied natural gas to the UK, Japan and Korea for the first time.  ...Download file to see next pagesRead More
Share:
Tags
Cite this document
(“Gazprom One of the Largest Gas Producing Companies of Russia Essay”, n.d.)
Retrieved from https://studentshare.org/macro-microeconomics/1543964-gazprom-report-swot-analysis

(Gazprom One of the Largest Gas Producing Companies of Russia Essay)
https://studentshare.org/macro-microeconomics/1543964-gazprom-report-swot-analysis.

“Gazprom One of the Largest Gas Producing Companies of Russia Essay”, n.d. https://studentshare.org/macro-microeconomics/1543964-gazprom-report-swot-analysis.
Comments (0)
Click to create a comment or rate a document

... to a large extent upon Plato to bring their ideas into focus. As a result, Plato is undoubtedly one of the greatest contributors to Western philosophy in the known world. Works Cited Jaspers, K. The Great Philosophers. Vol. 3. New York: Harcourt Brace and Company, 1993. Kreis, Steven. “Plate: The Allegory of the Cave.” May 13, 2004. The History Guide. November 3, 2008.
12 Pages(3000 words)Case Study

...” (Hays & Sadeddin, 2006). Their strategy is based on their learning from the existing business models and developing better and improved versions of new system that could actually help them in achieving higher competitive advantage and business value. The proposed research will focus on validating the advantages of late movers in e-commerce. The proposed research will attempt to gather useful evidence from two companies including: Barnes and Noble that is a publicly listed company operating as a late mover in online books distribution market and Walgreens that is one of the largest pharmaceutical companies that made an entry into e-commerce as a late mover in the industry. Objective The objective of the proposed research is investigate...
12 Pages(3000 words)Research Proposal

...Sustainability in Gazprom Gas Production Executive Summary The energy sector has attracted a lot of controversy as a major source ofgreenhouse gases that result in global warming. Gazprom is a leading generator of gas in Russia and has been extensively involved in sustainability measures to ensure that the company produces low-carbon gas. The EU, as the largest market for natural gas is highly liberalized thereby setting a strategic market for Gazprom to open its market to global gas users. By 2050, Gazprom seeks to be the leading producer of natural gas and importer in the EU region. This is following the current market trends which show that there is an increasingly high number of gas consumption the globe that is likely to increase...
8 Pages(2000 words)Assignment
sponsored ads
Save Your Time for More Important Things
Let us write or edit the essay on your topic "Gazprom - One of the Largest Gas Producing Companies of Russia" with a personal 20% discount.
GRAB THE BEST PAPER

Let us find you another Essay on topic Gazprom - One of the Largest Gas Producing Companies of Russia for FREE!