Comments (0)
Add to wishlistDelete from wishlist
Cite this document
Summary
This paper talks about cyclical nature of economic development. The economic views of Schumpeter on growth through innovative investment are expounded Schumpeter labeled the "four-phases" of a cycle: boom- recession-depression-recovery. Mechanism of cyclical economic development is presented…
Download full paperFile format: .doc, available for editing
HIDE THIS PAPERGRAB THE BEST PAPER95.5% of users find it useful 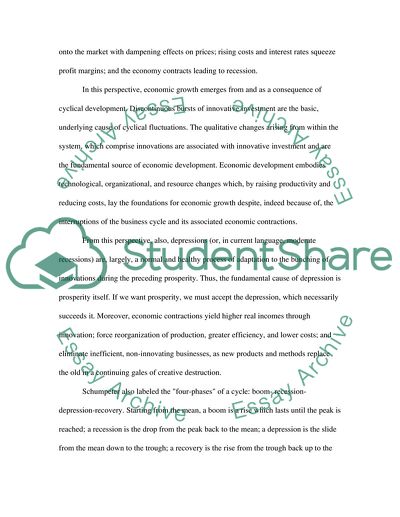 Extract of sample "Cyclical Economic Development in The Economic History"

Download file to see previous pages This paper analyses the process of economic growth, which emerges from and as a consequence of cyclical development.
In the 19th century, business cycles were not thought of as cycles at all but rather as spells of crises interrupting the smooth development of the economy. In later years, economists and non- economists alike began believing in the regularity of such crises, analyzing how they were spaced apart and associated with changing economic structures.
Schumpeter (1939) suggested that the economic development proceeds cyclically rather than evenly because innovations are not evenly distributed through time, but appear, if at all, discontinuously in groups or swarms.
Schumpeter identified the "four-phases" of a cycle. Starting from the mean, a boom is a rise which lasts until the peak is reached; a recession is the drop from the peak back to the mean; a depression is the slide from the mean down to the trough; a recovery is the rise from the trough back up to the mean. From the mean, we then move up into another boom and thus the beginning of another four-phase cycle. In a sense, any cycle of whatever duration can be described as going through these four phases - otherwise the fluctuations cannot be described as "cycles".
Empirical evidence shows that throughout the 19th Century, the price level moved backward and forward heavily while output was much less subject to fluctuations. The following four Kondratiev waves (ranging between 48-60 years) have been identified - going through four phases of boom-recession- depression-recovery : (1) The Industrial Revolution (1787-1842), (2) The Bourgeois Kondratiev (1898-1950), (3) The Neo-Mercantilist Kondratiev (1898-1950): and (4) The Fourth Kondratiev (1950- 2010).
...Download file to see next pagesRead More
Share:
Tags
Cite this document
(“Cyclical Economic Development in The Economic History Essay”, n.d.)
Cyclical Economic Development in The Economic History Essay. Retrieved from https://studentshare.org/macro-microeconomics/1536186-cyclical-economic-development-in-the-economic-history

“Cyclical Economic Development in The Economic History Essay”, n.d. https://studentshare.org/macro-microeconomics/1536186-cyclical-economic-development-in-the-economic-history.
Comments (0)
Click to create a comment or rate a document

CHECK THESE SAMPLES OF Cyclical Economic Development in The Economic History

Some believe that the living standard of the common worker fell during the revolution, while others are of the view that it rose and everyone was better off. This essay will try to review the factors that contributed to the industrial revolution to be adopted first of all by England, rather than by any other European country.
Though it is hard to pinpoint, but most historians agree that the Industrial Revolution basically originated in England with a series of social and technological innovations. Between 1760 and 1860, the progress in technology and education and an increasing capital stock, transformed England into the workshop of the world. This transformation came to be known as the Industrial Revolution, which gave rise...
8 Pages(2000 words)Essay

President Andrew Jackson led an example of an administration that set the stage for the way in which James Polk would lead. In 1817, as a still yet military leader, Jackson led the United States into the first of three conflicts with the Seminole Indians from which the acquisition of Florida from Spain would be negotiated and finalized. The situation with Spain was tenuous and should have been dealt with in a diplomatic and cautious manner, but in 1817 President Monroe wrote a letter to General Jackson stating that “Great interests...
8 Pages(2000 words)Article
sponsored ads
Save Your Time for More Important Things
Let us write or edit the essay on your topic "Cyclical Economic Development in The Economic History" with a personal 20% discount.
GRAB THE BEST PAPER

Let us find you another Essay on topic Cyclical Economic Development in The Economic History for FREE!