Comments (0)
Add to wishlist Delete from wishlist
Cite this document
Summary
This essay aims to determine the influence of the globalization processes on the dispersion of production throughout the world. As it is shown in the essay, modern economic globalization occurs through trade, foreign direct investment (FDI) and international transfer of knowledge and technology…
Download full paper File format: .doc, available for editing
HIDE THIS PAPERGRAB THE BEST PAPER92.2% of users find it useful 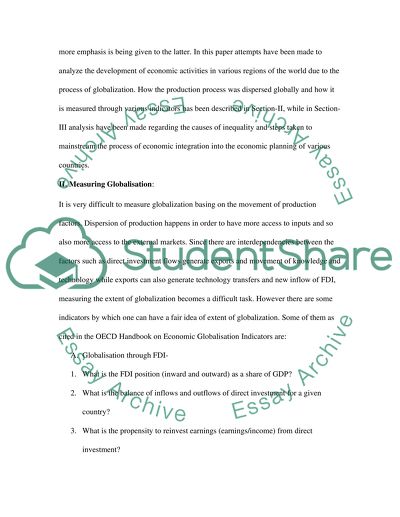 Download file to see previous pages II. Measuring Globalisation:
It is very difficult to measure globalization basing on the movement of production factors. Dispersion of production happens in order to have more access to inputs and so also more access to the external markets. Since there are interdependencies between the factors such as direct investment flows generate exports and movement of knowledge and technology while exports can also generate technology transfers and new inflow of FDI, measuring the extent of globalization becomes a difficult task. However there are some indicators by which one can have a fair idea of extent of globalization. Some of them as cited in the OECD Handbook on Economic Globalisation Indicators are:
A. Globalisation through FDI-
1. What is the FDI position (inward and outward) as a share of GDP
2. What is the balance of inflows and outflows of direct investment for a given country
3. What is the propensity to reinvest earnings (earnings/income) from direct investment
4. What is the share of foreign-controlled affiliates in economic output.
B. Globalisation through Trade:
1. Share of total exports in GDP.
2. Average of exports in GDP.
3. Share of domestic final demand met by imports.
4. Share of GDP generated by total exports.
There are many such indicators mention of which is beyond the purview of this essay. FDI1 is a good measure to know the extent of economic activities across the globe. "To create, acquire or expand a foreign subsidiary, MNEs undertake FDI. The total direct capital owned by non-residents in a given country each year constitutes the stock of FDI" (Navaretti & Venables, 3). As stated earlier that with a propensity of access to market and also access to inputs companies goes for cross border activities or disperses their business...
This essay attempts to analyze the development of economic activities in various regions of the world under the influence of the globalization processes.
After the year 1980 the world witnessed a new movement for the global economic integration, which was rapid rapid due to technological changes in various sectors. The unprecedented technological change in the transport and communication sector making the swift movement of goods and services, human resources and information on knowledge and technology across the globe at a cheaper cost is the main factor which continues to drive the globalization process. The changing attitude of the people and more liberal government policies contributed to deepen and widen the process of the economic integration by shifting the focus of the planners from national economies to an integrated world economy.
With breaking of the trade barriers and changing of the economic policies of the nations across the world make the companies to become transnational by opening up subsidiaries to distribute the business processes throughout the world.
Though the process of economic integration occurring at a faster rate in the developed countries but the same is yet to be achieved at rapid rate in developing world. What is needed for redressing global imbalances is a responsible multilateral effort, rather than pressure on parts of the developing world. A well-coordinated international macroeconomic approach would improve the chances of the poorer countries to consolidate their gains in growth performance
...Download file to see next pages Read More
Share:
Tags
Cite this document
(“Impact of the Globalization on a More Even Distribution of Economic Essay”, n.d.)
Impact of the Globalization on a More Even Distribution of Economic Essay. Retrieved from https://studentshare.org/macro-microeconomics/1531298-impact-of-the-globalization-on-a-more-even-distribution-of-economic-activity

“Impact of the Globalization on a More Even Distribution of Economic Essay”, n.d. https://studentshare.org/macro-microeconomics/1531298-impact-of-the-globalization-on-a-more-even-distribution-of-economic-activity.
Comments (0)
Click to create a comment or rate a document

Chapter 5: Conclusions: This chapter will detail the conclusions of the research and will also include the recommendations by the researcher. The limitations of this research will also be included and further research recommendations for the same will also be included.
Human resource managers have a major impact on organizations and they hold a very responsible position. The duties of the HR managers are to ensure that the organization employs the right set of employees and there is also a good mix of skills within the organization. It is also to ensure that all the activities and processes relating to the employees are handled and completed in sync with the culture, values, and mission of the company.
The main reason to...

Climate change and globalization are intricately linked. With the passage of time, many environmental issues, like global warming, have...
6 Pages (1500 words) Coursework

Soon a retail industry was built up and the community began to grow and is considered to be a society with a civic nature (Learning Communities in Education and Training, 2009). The community of Broken Hill can be considered to be highly diverse with a census that was conducted in the area in 1996 showed that out of the then population there were 961 people who came from overseas and a large amount of those was not from an English speaking nation. The large composition of the population in the community at the time was aboriginals or Torres Strait Islanders. Broken Hill thus shows a varying ethnic community and a diverse mindset considering a large proportion of the people are from nations such as Greece, Malta and even Italy (Lea...
6 Pages (1500 words) Case Study
sponsored ads
Save Your Time for More Important Things
Let us write or edit the essay on your topic "Impact of the Globalization on a More Even Distribution of Economic Activity" with a personal 20% discount.
GRAB THE BEST PAPER

Let us find you another Essay on topic Impact of the Globalization on a More Even Distribution of Economic Activity for FREE!