Comments (0)
Add to wishlistDelete from wishlist
Cite this document
Summary
This paper 'Economic and Political Environment of Orange Mobile" focuses on the fact that the proceedings of business are greatly influenced by changes within its environments. Differences can be between companies living in a concentrated industry living in a highly competitive way. …
Download full paperFile format: .doc, available for editing
HIDE THIS PAPERGRAB THE BEST PAPER98.8% of users find it useful 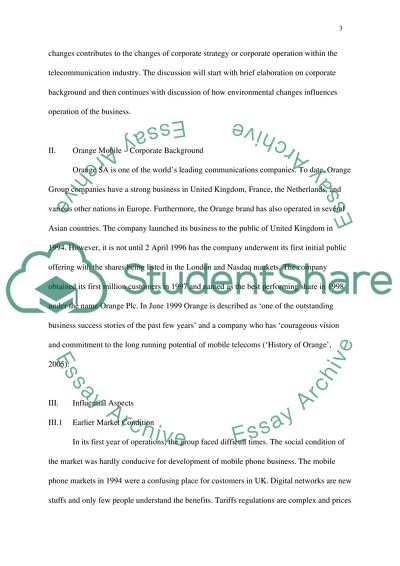 Extract of sample "Economic and Political Environment of Orange Mobile"

Download file to see previous pages The state of social stability within the environment also often becomes the cause of vast development in a certain industry and insufficient funding in another.
The extent of influence produces by various conditions within the environment differs for one industry and for another. There are companies, which businesses are so vital to the community, which government strives to maintain stability within their environment. On the other hand, there are companies that must adjust themselves to changes in their environment without significant bargaining powers to question the situation. It is important to recognize the differences between corporations regarding this issue.
Within this elaboration, I am discussing the effect of political and economic changes in the environment to the telecommunication industry. The objects of study are Orange Mobile, one of the market leader of the telecommunication industry in Europe, and several of its competitors. The purpose of the elaboration is to define the extent to which environmental changes contributes to the changes of corporate strategy or corporate operation within the telecommunication industry. The discussion will start with brief elaboration on the corporate background and then continues with a discussion of how environmental changes influences the operation of the business.
Orange Mobile – Corporate Background
Orange SA is one of the world’s leading communications companies. To date, Orange Group companies have a strong business in the United Kingdom, France, the Netherlands, and various other nations in Europe. Furthermore, the Orange brand has also operated in several Asian countries. The company launched its business to the public of the United Kingdom in 1994. However, it is not until 2 April 1996 has the company underwent its first initial public offering with the shares being listed on the London and Nasdaq markets. The company obtained its first million customers in 1997 and named as the best performing share in 1998 under the name Orange Plc. In June 1999 Orange is described as 'one of the outstanding business success stories of the past few years' and a company who has 'courageous vision and commitment to the long-running potential of mobile telecoms ('History of Orange', 2005). III. Influential Aspects
III.1 Earlier Market Condition
In its first year of operations, the group faced difficult times. The social condition of the market was hardly conducive for the development of a mobile phone business. The mobile phone markets in 1994 were a confusing place for customers in the UK. Digital networks are new kinds of stuff and only a few people understand the benefits. Tariffs regulations are complex and prices are high making the industry only attractive to business customers. For an illustration of the inconvenient system, users had to sign-up to a three-year contract, with high monthly rental fees, high call tariffs and with little flexibility regarding the type of services offer ('History of Orange', 2005).
Today, however, the business has developed into millions of dollars worth of industry in the UK. Rapid innovation also causes the customer to become more critical toward every aspect of the product and service provided.  ...Download file to see next pagesRead More
Share:
Tags
Cite this document
(Economic and Political Environment of Orange Mobile Case Study, n.d.)
Economic and Political Environment of Orange Mobile Case Study. Retrieved from https://studentshare.org/macro-microeconomics/1519418-economic-and-political-environment-of-orange-mobile

CHECK THESE SAMPLES OF Economic and Political Environment of Orange Mobile

...Political communication: Today, voters no longer make decisions based only on personal opinion but view most issues through the eyes and ears of the media. Most options arise from interpretation of the symbols obtained from mass media. Political advertising is a prominent media for reaching voters. Political advertisements aim at increasing issue knowledge, influencing perceptions of the candidate’s character, altering attitudes and affecting candidate preference. In most political advertisements, politicians essentially promote themselves, their thoughts, beliefs, values, image and political propaganda. These advertisements can have a rather persuasive influence on voters. Political ads can convey both positive and negative feelings...
6 Pages(1500 words)Essay

Furthermore, the common people were allowed to scribble their thoughts about the incumbent government on the famous Beijing Wall. That is why when Deng came to power he was welcomed by most of the people especially the students, but this reaction of the people was short-lived.
Although Deng did believe that political reform was needed for the sustainable growth of the economy, he made it very clear that these reforms could not in any way bring the western-style democracy in. (Gittings, 2006). China’s conservatives even believe that he defined ‘political reform’ in a very narrow manner. For him, political reform meant something that could help the government in keeping the economy stable and hence motivating...
9 Pages(2250 words)Assignment

President Andrew Jackson led an example of an administration that set the stage for the way in which James Polk would lead. In 1817, as a still yet military leader, Jackson led the United States into the first of three conflicts with the Seminole Indians from which the acquisition of Florida from Spain would be negotiated and finalized. The situation with Spain was tenuous and should have been dealt with in a diplomatic and cautious manner, but in 1817 President Monroe wrote a letter to General Jackson stating that “Great interests...
8 Pages(2000 words)Article
sponsored ads
Save Your Time for More Important Things
Let us write or edit the case study on your topic "Economic and Political Environment of Orange Mobile" with a personal 20% discount.
GRAB THE BEST PAPER

Let us find you another Case Study on topic Economic and Political Environment of Orange Mobile for FREE!