Comments (0)
Add to wishlist Delete from wishlist
Cite this document
Summary
The existence of a USA merchandise trade deficit since 1980s is due to the existence of a strong economy. This is on the other hand having increased the Americans appetite for foreign goods such as cars, clothing's, TVs and other electronics goods. …
Download full paper File format: .doc, available for editing
HIDE THIS PAPERGRAB THE BEST PAPER91% of users find it useful 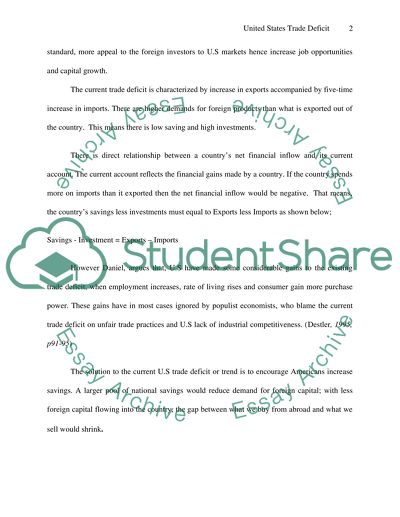 United s Trade Deficit The existence of a USA merchandise trade deficit since 1980s is due to the existence of a strong economy. This is on theother hand having increased the Americans appetite for foreign goods such as cars, clothing's, TVs and other electronics goods. Strong US Dollar that makes U.S.-made products more expensive to foreign buyers also causes the continued trade deficit. Despite its current trade deficit, American economy is viewed as healthier than other world economies that have been mired by worldwide slump. (AP/CBS, Washington, May23, 2003)
According to Daniel, the current account deficit is not a problem. The history of U.S economy shows that, the country has been doing well internationally despite the existence of trade deficit. There has been increase in exports during the time of trade deficits. Increase in imports by Americans and craving for more varieties of goods and products from other countries leads to more freedom in consumer choice, hence more efficiency, improved living standard that signals global investor confidence in the U.S. The deficit neither had dragged the economy growth, nor does it costs job losses. Instead it has shown the increased growth rate and reduction of unemployment during this period. (June 11, 1998).
The U.S has been advocating for free international trade. Many analysts have argued that, free trade is responsible for the existence of trade deficit that opens U.S markets to foreign products. 1However, Daniel, disagree, according to him, free trade will lead to improved living standard, more appeal to the foreign investors to U.S markets hence increase job opportunities and capital growth.
The current trade deficit is characterized by increase in exports accompanied by five-time increase in imports. There are higher demands for foreign products than what is exported out of the country. This means there is low saving and high investments.
There is direct relationship between a country's net financial inflow and its current account. The current account reflects the financial gains made by a country. If the country spends more on imports than it exported then the net financial inflow would be negative. That means, the country's savings less investments must equal to Exports less Imports as shown below;
Savings - Investment = Exports - Imports
However Daniel, argues that, U.S have made some considerable gains to the existing trade deficit, when employment increases, rate of living rises and consumer gain more purchase power. These gains have in most cases ignored by populist economists, who blame the current trade deficit on unfair trade practices and U.S lack of industrial competitiveness. (Destler, 1995, p91-95)
The solution to the current U.S trade deficit or trend is to encourage Americans increase savings. A larger pool of national savings would reduce demand for foreign capital; with less foreign capital flowing into the country, the gap between what we buy from abroad and what we sell would shrink.
Another way to cut the trade deficit is for the government to borrow less. This would release more funds for domestic investment, reducing the demand for foreign capital. (Daniel T. Griswold, April 20, 1998)

The John Lewis model of partnership states that the ultimate purpose of business is the happiness of all its members. Hence, when partners “share the responsibilities of ownership as well as its rewards of profit, knowledge, and power”, it is mutually beneficial to all members of the organization (ILO, 1996). The partnership can be a part of the commitment to pluralism and also a part of the non-union agenda (Bacon & Storey, 2000). The national agreement Partnership 2000 defines workplace partnership as “an active relationship based on recognition of common interest to secure the competitiveness, viability, and prosperity of the enterprise” (Doherty, 2008). The interest in the partnership has arisen due...
6 Pages (1500 words) Case Study
sponsored ads
Save Your Time for More Important Things
Let us write or edit the essay on your topic "United States trade deficit" with a personal 20% discount.
GRAB THE BEST PAPER

Let us find you another Essay on topic United States trade deficit for FREE!