Comments (0)
Add to wishlistDelete from wishlist
Cite this document
Summary
The paper "Effect of Globalisation on Inequalities Between Nations in Australia" highlights that sociologists and an increasing number of economists are struggling to understand the coalition of ethnicity, gender and social status in their explanations of social inequalities…
Download full paperFile format: .doc, available for editing
HIDE THIS PAPERGRAB THE BEST PAPER91.4% of users find it useful 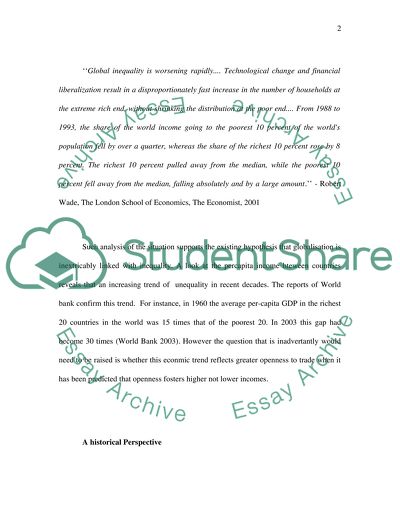 Download file to see previous pages Hoogvelt defines globalisation as a term for an “intensifying networks of cross border interaction in all areas of human activity: social, political, cultural, financial and economic’’. This is undeniably most relevant in the current state of the world where any economic change cannot be unaccompanied by cultural and social changes in society. In fact, it would not be wrong to say that this has been the trend over the last century where subordinate or colonised society's cultures are infiltrated by the dominant economic power. Australian society stands out as one such example. In the colonisation era, the effect of European culture was consistently observed in Australia up until 1948, and this has now been replaced by a distinctive American influence (which can be attributed to the strong American Economy).
However contemporary globalisation is increasingly being associated with trends of inequality and wage distribution differences both on an intra nation and on a wider international scale. These structural political-economic changes are generating greater social-spatial inequalities. As Rober Wade has stated;
''Global inequality is worsening rapidly... Technological change and financial liberalization result in a disproportionately fast increase in the number of households at the extreme rich end, without shrinking the distribution at the poor end... From 1988 to 1993, the share of the world income going to the poorest 10 percent of the world's population fell by over a quarter, whereas the share of the richest 10 percent rose by 8 percent. The richest 10 percent pulled away from the median, while the poorest 10 percent fell away from the median, falling absolutely and by a large amount.'' - Robert Wade, The London School of Economics, The Economist, 2001
Such an analysis of the situation supports the existing hypothesis that globalisation is inextricably linked with inequality. A look at the per capita income between countries reveals an increasing trend of inequality in recent decades. The reports of the World bank confirm this trend. For instance, in 1960 the average per-capita GDP in the richest 20 countries in the world was 15 times that of the poorest 20. In 2003 this gap had become 30 times (World Bank 2003). However, the question that is inadvertent would need to be raised is whether this economic trend reflects greater openness to trade when it has been predicted that openness fosters higher, not lower incomes.
A historical Perspective
The increasing inequality, without a doubt, is one of the most challenging aspects of the current wave of globalization. None the less it important to understand the significance of this aspect, in the context of a historical perspective of globalisation. Past several decades or in fact phases of globalization have coincided with increasing inequality within countries but inequality between nations was never observed. The world bank has established three phases of globalisation; the pre-world war I, the post-world war I, and the present phase. The first two phases saw much disparity on an intra nation level but the third world did not catch up with the first world or even with the then-existing second world. However, increasing technology and communications which are a vital part of the 3rd or present phase of globalisation have seen what may best be termed as a global and international effect of trends of liberalisation. If they are far-reaching, we do not know, but the nature of this exciting association shall be discussed further on.
The association between globalisation and inequality ...Download file to see next pagesRead More
Share:
Tags
Cite this document
(Does globalisation aggrevate or reduce inequalities between nations Case Study, n.d.)
Does globalisation aggrevate or reduce inequalities between nations Case Study. https://studentshare.org/macro-microeconomics/1502969-does-globalisation-aggrevate-or-reduce-inequalities-between-nations
(Does Globalisation Aggrevate or Reduce Inequalities Between Nations Case Study)
Does Globalisation Aggrevate or Reduce Inequalities Between Nations Case Study. https://studentshare.org/macro-microeconomics/1502969-does-globalisation-aggrevate-or-reduce-inequalities-between-nations.
“Does Globalisation Aggrevate or Reduce Inequalities Between Nations Case Study”. https://studentshare.org/macro-microeconomics/1502969-does-globalisation-aggrevate-or-reduce-inequalities-between-nations.
Comments (0)
Click to create a comment or rate a document

Does Globalization Produce Greater Inequalities between the Sexes

8 Pages(2000 words)Coursework
sponsored ads
Save Your Time for More Important Things
Let us write or edit the case study on your topic "Effect of Globalisation on Inequalities Between Nations in Australia" with a personal 20% discount.
GRAB THE BEST PAPER

Let us find you another Case Study on topic Effect of Globalisation on Inequalities Between Nations in Australia for FREE!