Comments (0)
Add to wishlistDelete from wishlist
Cite this document
Summary
Economics in China and South Korea Over the last couple of years, the Asian region has undergone a significant revolution in terms of its economy. The region mostly composed of the third world countries has developed to become among the world's economic powerhouses competing with nations such as the United States of America, the United Kingdom as well as other European nations…
Download full paperFile format: .doc, available for editing
HIDE THIS PAPERGRAB THE BEST PAPER94.2% of users find it useful 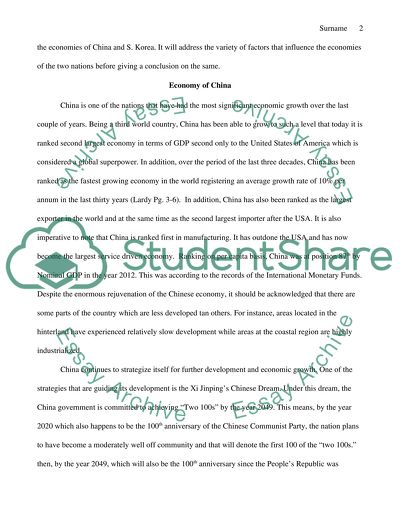 Download file to see previous pages Another reason as to why the economy of these two nations as well as that of the general Asian region is the availability of technology and well skilled personnel who are able to use this technology to improve production (Onyemelukwe, Pg. 265). The high population of these nations has also been a contributing factor due to the fact that it creates a large and ready market for finished goods. In economics, one of the factors that influence the demand of a commodity is the size of the population. As such, with the high population in China and S. Korea, the demand for finished goods is high (Onyemelukwe, Pg. 266). Despite the numerous similarities between the economic growth and development of China and that of S. Korea, it is imperative to note that there are some distinguishing factors between the two and hence there exist a number of differences. As a norm, the economical and political environment of one geographical region will always differ from that of other regions. This article will purpose to compare and contrast the economies of China and S. Korea. It will address the variety of factors that influence the economies of the two nations before giving a conclusion on the same. Economy of China China is one of the nations that have had the most significant economic growth over the last couple of years. Being a third world country, China has been able to grow to such a level that today it is ranked second largest economy in terms of GDP second only to the United States of America which is considered a global superpower. In addition, over the period of the last three decades, China has been ranked as the fastest growing economy in the world registering an average growth rate of 10% per annum in the last thirty years (Lardy Pg. 3-6). In addition, China has also been ranked as the largest exporter in the world and at the same time as the second largest importer after the USA. It is also imperative to note that China is ranked first in manufacturing. It has outdone the USA and has now become the largest service driven economy. Ranking on per capita basis, China was at position 87th by Nominal GDP in the year 2012. This was according to the records of the International Monetary Funds. Despite the enormous rejuvenation of the Chinese economy, it should be acknowledged that there are some parts of the country which are less developed tan others. For instance, areas located in the hinterland have experienced relatively slow development while areas at the coastal region are highly industrialized. China continues to strategize itself for further development and economic growth. One of the strategies that are guiding its development is the Xi Jinping’s Chinese Dream. Under this dream, the China government is committed to achieving “Two 100s” by the year 2049. This means, by the year 2020 which also happens to be the 100th anniversary of the Chinese Communist Party, the nation plans to have become a moderately well off community and that will denote the first 100 of the “two 100s.” then, by the year 2049, which will also be the 100th anniversary since the People’s Republic was founded, it is expected that China will be a fully developed economy. There are a number of factors that have contributed to the growth and ...Download file to see next pagesRead More
Share:
Tags
Cite this document
(“Econ5150final Essay Example | Topics and Well Written Essays - 3000 words”, n.d.)
Econ5150final Essay Example | Topics and Well Written Essays - 3000 words. Retrieved from https://studentshare.org/macro-microeconomics/1494352-econ5150final
(Econ5150final Essay Example | Topics and Well Written Essays - 3000 Words)
Econ5150final Essay Example | Topics and Well Written Essays - 3000 Words. https://studentshare.org/macro-microeconomics/1494352-econ5150final.
“Econ5150final Essay Example | Topics and Well Written Essays - 3000 Words”, n.d. https://studentshare.org/macro-microeconomics/1494352-econ5150final.
Comments (0)
Click to create a comment or rate a document

CHECK THESE SAMPLES OF Econ5150final

The Future of Beverage Industry

Widows of the New Testament

The Significance of Attachment in Psychological Development

A Deeper Look Into ADHD

When are people justified in rebelling from a government

Proposal for the analytical report

9 Pages(2250 words)Research Paper
sponsored ads
Save Your Time for More Important Things
Let us write or edit the essay on your topic "Econ5150final" with a personal 20% discount.
GRAB THE BEST PAPER

Let us find you another Essay on topic Econ5150final for FREE!