Government Intervention in the Marketing of Raisins - Assignment Example

Comments (0)
Add to wishlistDelete from wishlist
Cite this document
Summary
The following assignment entitled 'Government Intervention in the Marketing of Raisins' is focused on the government which issued the marketing orders pertaining to the marketing of the raisin is Agricultural and Marketing Agreement Act that was adopted in 1937…
Download full paperFile format: .doc, available for editing
HIDE THIS PAPERGRAB THE BEST PAPER94.5% of users find it useful 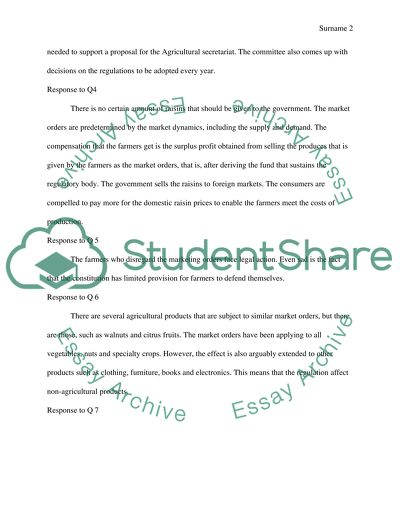 Extract of sample "Government Intervention in the Marketing of Raisins"

The consultations and agreements are derived from the industry. One of the requirements is that at least two-thirds of the board members are needed to support a proposal for the Agricultural secretariat. The committee also comes up with decisions on the regulations to be adopted every year.
There is no certain amount of raisins that should be given to the government. The market orders are predetermined by the market dynamics, including supply and demand. The compensation that the farmers get is the surplus profit obtained from selling the produces that is given by the farmers as the market orders, that is, after deriving the fund that sustains the regulatory body. The government sells the raisins to foreign markets. The consumers are compelled to pay more for the domestic raisin prices to enable the farmers to meet the costs of production.
The farmers who disregard the marketing orders face legal action. Even sad is the fact that the constitution has limited provision for farmers to defend themselves.
There are several agricultural products that are subject to similar market orders, but there are those, such as walnuts and citrus fruits. The market orders have been applying to all vegetables, nuts and specialty crops. However, the effect is also arguably extended to other products such as clothing, furniture, books, and electronics. This means that regulation affects non-agricultural products.
The reason for the raisin farmers to vote for the abolition of the marketing order is that the orders are extortionist and unnecessary. The only reason for them to vote to keep the order is that it regulates the raisin produce by checking on wasteful demand.
Another policy is to introduce regulatory controls such as through taxation systems.
I agree that the market orders are government-enforced cartels. The order is to blame for the high costs of a raisin in the domestic market. In other cases, it compels the farmers to part with significant portions. In my view, objective regulation would strive to limit associated consequences.
The private entities have often been labeled as being extortionist and capitalist in nature because they rarely represent the interest of the public. Indeed, there are laws that check on the extortionist, but these are rarely directed at government agencies. The government extortionist policies are considered legitimate and rarely questioned.
There are two general justifications for the necessity of the interventions of the government in economic activities. One of the justifications is the need to foster fairness while the other is to improve efficiency. Fairness, in this scenario, would be described as the addressing extortionist while efficiency implies aligning the operation of the market with supply and demand dynamics for the benefit of the economy. Examining the market orders regulations on the basis of the justifications reveals otherwise because they fail to assure fairness and efficiency. There are concerns that the objectives of the regulation have ceased to exist. For example, there are concerns that domestic raisin prices are higher than those of the international ones. Indeed, when regulations are characterized by such market imperfectness, they can be hardly described as being effective. In my view, what could make the regulations to be considered meeting the objectives is when the domestic prices of the raisins are lower than the international ones, creating the allowance for even the domestic consumers to benefit from the regulations. Furthermore, another indicator is that the regulations do not meet the objectives is that they seem to be hurting even the producers by imposing orders that make the farmers to part with significant portions of the product that would have otherwise benefited them much.
First, the bone of contention is that the market orders no longer have a place in the regulation of the raisin market, while there is also the group that represents the views that raising market orders still have a place. Read More
Share:
Tags
Cite this document
(“No topic Assignment Example | Topics and Well Written Essays - 750 words”, n.d.)
No topic Assignment Example | Topics and Well Written Essays - 750 words. Retrieved from https://studentshare.org/macro-microeconomics/1475767-no-topic

CHECK THESE SAMPLES OF Government Intervention in the Marketing of Raisins

Maslow has argued that security and safety are required by all human beings (Boeree 2006). According to the Federation Internationale de Football Association (2009), Uruguay was the first nation to host the Fifa World Cup. In 2010, South Africa would be the first African nation to host the next World Cup. But Euromonitor (2009) considers that South Africa is a country with a significant rate of insecurity that would influence the trip to South Africa. Various security strategies will have to be reviewed by the South African Government in order to implement security and safety during this big event (Republic of South Africa, 2008). To accomplish the safety of the tourists during the World Cup 2010, many South African cities have in...
17 Pages(4250 words)Research Proposal
sponsored ads
Save Your Time for More Important Things
Let us write or edit the assignment on your topic "Government Intervention in the Marketing of Raisins" with a personal 20% discount.
GRAB THE BEST PAPER

Let us find you another Assignment on topic Government Intervention in the Marketing of Raisins for FREE!