Comments (0)
Add to wishlistDelete from wishlist
Cite this document
Summary
Insert name Insert name of the course instructor Insert name of the course Insert date assignment is due Economic performance of the four most recent US Presidents There have been raging debates about the real economic performance of presidents and how their political and economic policies affected both the micro and macro economic aspects of the US and the world…
Download full paperFile format: .doc, available for editing
HIDE THIS PAPERGRAB THE BEST PAPER91% of users find it useful 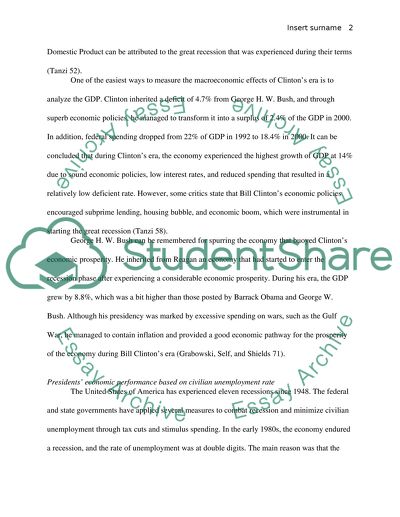 Download file to see previous pages Presidents’ economic performance based on the real Gross Domestic Products The two presidential terms, the first term of president Barrack Obama and the last term of President George W. Bush were characterized by the worst economic performance since World War II. The real Gross Domestic Product (GDP) grew by only 4% during the second term of President George W. Bush’s tenure, which was the weakest since World War II. During the first term of Obama’s tenure, the real GDP grew by 5.9%, the second weakest since World War II. According to NBER (National Bureau of economic research), the most recent recession began in 2007 and ended in 2009. NBER states that economic recession starts when growth is at the peak, and then the nation begins to experience slow economic activity. A recession comes to an end and economic expansion begins after the economic activities hit the economic trough and start to grow again. It can be concluded that the most recent economic growth was lowest during the last term of George W. Bush and started to peak during Barrack Obama’s first term. ...
W. Bush, and through superb economic policies, he managed to transform it into a surplus of 2.4% of the GDP in 2000. In addition, federal spending dropped from 22% of GDP in 1992 to 18.4% in 2000. It can be concluded that during Clinton’s era, the economy experienced the highest growth of GDP at 14% due to sound economic policies, low interest rates, and reduced spending that resulted in a relatively low deficient rate. However, some critics state that Bill Clinton’s economic policies encouraged subprime lending, housing bubble, and economic boom, which were instrumental in starting the great recession (Tanzi 58). George H. W. Bush can be remembered for spurring the economy that buoyed Clinton’s economic prosperity. He inherited from Reagan an economy that had started to enter the recession phase after experiencing a considerable economic prosperity. During his era, the GDP grew by 8.8%, which was a bit higher than those posted by Barrack Obama and George W. Bush. Although his presidency was marked by excessive spending on wars, such as the Gulf War, he managed to contain inflation and provided a good economic pathway for the prosperity of the economy during Bill Clinton’s era (Grabowski, Self, and Shields 71). Presidents’ economic performance based on civilian unemployment rate The United States of America has experienced eleven recessions since 1948. The federal and state governments have applied several measures to combat recession and minimize civilian unemployment through tax cuts and stimulus spending. In the early 1980s, the economy endured a recession, and the rate of unemployment was at double digits. The main reason was that the federal government was trying to minimize the inflation that was affecting ...Download file to see next pagesRead More
Share:
Cite this document
(“Economic Report Essay Example | Topics and Well Written Essays - 1500 words”, n.d.)
Economic Report Essay Example | Topics and Well Written Essays - 1500 words. Retrieved from https://studentshare.org/macro-microeconomics/1468974-economic-report

CHECK THESE SAMPLES OF Economic Report

How Amazon Became One of Todays Major Online Retail Players

The Psychology of Marketing

Trifles ( A Play) by Susan Glaspell

... is any unwelcome sexual advance, request for sexual favor or other verbal, non-verbal or physical conduct of a sexual nature which unreasonably interferes with work, is made a condition of employment, or creates an intimidating, hostile or offensive environment.” (Joshi & Nachison, 1996, p.3). The “victim” may be a man or a woman. The “victim” does not have to be of the opposite sex, nor does the “victim” have to be the person harassed, but someone nearby who was negatively affected by the behavior/ situation. The “harasser” may be the employee’s supervisor, other member of management, a co-worker, an agent of the employer, a vendor, or any other non-employee. Sexual Harassment may occur even though there is no economic injury (impact...
8 Pages(2000 words)Report

...as good hedge against economic downturns. Investors who wanted to diversify their portfolio risks only need to buy G.E. stock to achieve that objective. Even today, G.E. is a potpourri or hodgepodge of individual business units that manufactures aircraft engines, health imaging devices and power generators. It is a multinational in the true sense of the word too. This shotgun approach to doing business has been under criticism lately because it had sometimes failed to produce the promised synergies between business units. Secondly, there is a revival in the management concept of core competencies. G.E. today is still a market leader in many industries it is in but that lack of a central focus has withered away its...
12 Pages(3000 words)Report
sponsored ads
Save Your Time for More Important Things
Let us write or edit the essay on your topic "Economic Report" with a personal 20% discount.
GRAB THE BEST PAPER

Let us find you another Essay on topic Economic Report for FREE!