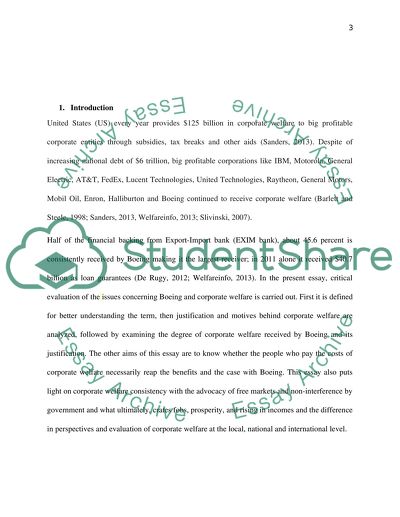 Download file to see previous pages Despite of increasing national debt of $6 trillion, big profitable corporations like IBM, Motorola, General Electric, AT&T, FedEx, Lucent Technologies, United Technologies, Raytheon, General Motors, Mobil Oil, Enron, Halliburton and Boeing continued to receive corporate welfare (Barlett and Steele, 1998; Sanders, 2013, Welfareinfo, 2013; Slivinski, 2007). Half of the financial backing from Export-Import bank (EXIM bank), about 45.6 percent is consistently received by Boeing making it the largest receiver; in 2011 alone it received $40.7 billion as loan guarantees (De Rugy, 2012; Welfareinfo, 2013). In the present essay, critical evaluation of the issues concerning Boeing and corporate welfare is carried out. First it is defined for better understanding the term, then justification and motives behind corporate welfare are analyzed, followed by examining the degree of corporate welfare received by Boeing and its justification. The other aims of this essay are to know whether the people who pay the costs of corporate welfare necessarily reap the benefits and the case with Boeing. This essay also puts light on corporate welfare consistency with the advocacy of free markets and non-interference by government and what ultimately, crates fobs, prosperity, and rising in incomes and the difference in perspectives and evaluation of corporate welfare at the local, national and international level. 2. Corporate Welfare Definition expend Corporate welfare refers to all the expenditures by the government towards direct and indirect subsidies provided to private sector and businesses. Corporate welfare can be defined as “any federal spending program that provides payments or unique benefits and advantages to specific companies or industries” (Slivinski, 2007, p.1). The separate definitions of the two terms helps in understanding it better, welfare according to dictionary.com (2013, Para: 5) is “receiving financial aid from the government or from a private organization because of hardship and need”. And corporate welfare is nothing but “welfare for businesses usually given to big corporations” (Collins, 2009, Para: 2). Time magazine in its special coverage defines Corporate welfare “as any action by local, state or federal government that gives a corporation or an entire industry a benefit not offered to others” (Barlett and Steel, 1998, Para:4). However in US corporate welfare system is very complicated and extensive. Its aim is not to improve standard of living or poverty prevention unlike the welfare provided to individuals, this and its expanse of interests makes it a very controversial and debatable issue because a single congressional committee cannot monitor or control it (Welfare info, 2013). Corporate welfare can be in the form of subsidies, grants, aids, real estate, loans with low-interest rate, tax break, deferral, exemption, deduction, lower tax or a government service (Barlett and Steele, 1998). 3. Justifications for ...Download file to see next pagesRead More
Share:
Tags
Cite this document
(“Boeing, Corporate Welfare Research Paper Example | Topics and Well Written Essays - 1250 words”, n.d.)
Boeing, Corporate Welfare Research Paper Example | Topics and Well Written Essays - 1250 words. Retrieved from https://studentshare.org/macro-microeconomics/1468514-boeing-corporate-welfare
(Boeing, Corporate Welfare Research Paper Example | Topics and Well Written Essays - 1250 Words)
Boeing, Corporate Welfare Research Paper Example | Topics and Well Written Essays - 1250 Words. https://studentshare.org/macro-microeconomics/1468514-boeing-corporate-welfare.
“Boeing, Corporate Welfare Research Paper Example | Topics and Well Written Essays - 1250 Words”, n.d. https://studentshare.org/macro-microeconomics/1468514-boeing-corporate-welfare.
Comments (0)
Click to create a comment or rate a document

Critics of the excessive packages are of the opinion that such high packages reflect ‘pay for failure’ and do not take in to account the financial performance of the company (Solomon, 2007 p. 40). Additionally, most of the directors are geared at self-interests, thus undermining the ability of the shareholders to receive a fair return for their investments (Barty and Jones, 2012 p.14).
According to a recent report by the High Pay Commission, there has been a drastic growth in directors’ packages over the last thirty years. According to the report, directors’ packages have risen by about 5,000 percent in the last thirty years while the average income worker has increased by only 300 percent. The report...
6 Pages(1500 words)Coursework

In order to compare the welfare system of the three proposed countries, it is important to first develop a comparative method that would guide in comparing the three states. For the purpose of this paper, a binary comparison would be conducted. The implicit comparison would deal with Britain while the explicit comparison would explore the USA and Canada. Thereby a small N’ study would be used, that is, of three countries.
The three countries selected to share a similarity in the form that these countries are a welfare state. This is when welfare is mainly funded by the state. While the USA and Canada focus on the liberal welfare state, the welfare state of the UK is not quite defined.
The comparison of the welfare...
8 Pages(2000 words)Term Paper
sponsored ads
Save Your Time for More Important Things
Let us write or edit the research paper on your topic "Boeing, Corporate Welfare" with a personal 20% discount.
GRAB THE BEST PAPER

Let us find you another Research Paper on topic Boeing, Corporate Welfare for FREE!