Comments (0)
Add to wishlistDelete from wishlist
Cite this document
Summary
This essay deals with oligopolistic market structures and incentives that push them towards collusion. In doing so, it discusses the characteristics of oligopolies, collusion, cartels, game theory and the kinked demand curve…
Download full paperFile format: .doc, available for editing
HIDE THIS PAPERGRAB THE BEST PAPER95.3% of users find it useful 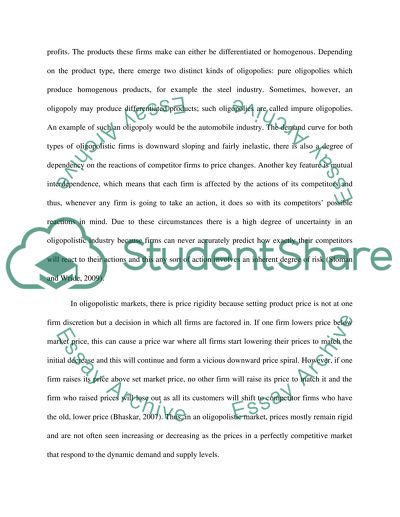 Download file to see previous pages A firm achieves maximum profits when it operates where its marginal revenue equals marginal cost (MC=MR). However, it is mostly not as easy as a question of operating at this point; the more competition the firm faces, the lesser it will be able to manipulate the consumers for its own economic gain (Sloman and Wride, 2009). The two extremes in market structures are (i) Perfect Competition and (ii) Monopoly. However, in real life, firms often operate somewhere in the middle of these two extremes. Such market structures are characterized by Imperfect Competition. There are two main kinds of markets that practice imperfect competition: (i) Monopolistic Competition and (ii) Oligopolies. Some famous oligopolistic firms are Pepsi, Coke, Nike, Adidas, Reebok and Nintendo (Sloman and Wride, 2009). In an oligopoly, the number of competitors is less and limited and there are high barriers which prevent frequent entry of new firms into the market. Barriers of entry may be created in the form of brand names, sunk costs, firm size, economies of scale, and large firm advantage (Boyes and Melvin, 2009). Competition between firms in an oligopolistic market is high and intense, it sometimes leads to price wars which become extremely detrimental for their effective functioning. In other instances, these firms choose to collude amongst themselves to minimize the downsides of operating in an oligopolistic market and to simultaneously maximize their profits. The products these firms make can either be differentiated or homogenous. Depending on the product type, there emerge two distinct kinds of oligopolies: pure oligopolies which produce homogenous products, for example the steel industry. Sometimes, however, an oligopoly may produce differentiated products; such oligopolies are called impure oligopolies. An example of such an oligopoly would be the automobile industry. The demand curve for both types of oligopolistic firms is downward sloping and fairly inelastic, there is also a degree of dependency on the reactions of competitor firms to price changes. Another key feature is mutual interdependence, which means that each firm is affected by the actions of its competitors and thus, whenever any firm is going to take an action, it does so with its competitors’ possible reactions in mind. Due to these circumstances there is a high degree of uncertainty in an oligopolistic industry because firms can never accurately predict how exactly their competitors will react to their actions and this any sort of action involves an inherent degree of risk (Sloman and Wride, 2009). In oligopolistic markets, there is price rigidity because setting product price is not at one firm discretion but a decision in which all firms are factored in. If one firm lowers price below market price, this can cause a price war where all firms start lowering their prices to match the initial decrease and this will continue and form a vicious downward price spiral. However, if one firm raises its price above set market price, no other firm will raise its price to match it and the firm who raised prices will lose out as all its customers will shift to competitor firms who have the old, lower price (Bhaskar, 2007). Thus, in an oligopolistic market, prices mostly remain rigid and are not often seen increasing or decreasing as the prices in a perfectly competitive market that respond to the dynamic demand and supply levels. Therefore, the demand curve faces a kink at the existing market price level and market price will not change for small changes in production cost etc. (Sen, 2004). This is shown in the diagram below: ...Download file to see next pagesRead More
Share:
Tags
Cite this document
(“Why are Oligopolies Tempted to Collude Even if it Means Breaking the Essay”, n.d.)
Retrieved from https://studentshare.org/macro-microeconomics/1454822-why-are-oligopolies-tempted-to-collude-even-if-it
(Why Are Oligopolies Tempted to Collude Even If It Means Breaking the Essay)
https://studentshare.org/macro-microeconomics/1454822-why-are-oligopolies-tempted-to-collude-even-if-it.
“Why Are Oligopolies Tempted to Collude Even If It Means Breaking the Essay”, n.d. https://studentshare.org/macro-microeconomics/1454822-why-are-oligopolies-tempted-to-collude-even-if-it.
Comments (0)
Click to create a comment or rate a document

New and complex issues have arisen which demanded fresh understanding and handling of cases involved them. This has resulted in the enhanced development of specialized laws e.g. cyber laws and interpretation of those laws. The same is true with Media Laws. Media has developed much in the last half-century. As it evolved as a profession and more people started to join it, there arose the levels of money involved in it. With this grew the contractual obligations on the parts of parties and concerned laws e.g. patent laws, privacy laws, and copyrights laws, etc. also started to play their parts. With these issues, the role of law in the media industry also reached a new height.
Mathew Fisher, the appellant, joined a band with Mr...
6 Pages(1500 words)Assignment
sponsored ads
Save Your Time for More Important Things
Let us write or edit the essay on your topic "Why are Oligopolies Tempted to Collude Even if it Means Breaking the Law" with a personal 20% discount.
GRAB THE BEST PAPER

Let us find you another Essay on topic Why are Oligopolies Tempted to Collude Even if it Means Breaking the Law for FREE!