Comments (0)
Add to wishlist Delete from wishlist
Cite this document
Summary
Commodity prices are generally influenced by a number of economic factors, the most common being the demand and supply of the commodity in the market. Nevertheless, the forces of demand and supply are also influenced by other macroeconomic factors …
Download full paper File format: .doc, available for editing
HIDE THIS PAPERGRAB THE BEST PAPER97% of users find it useful 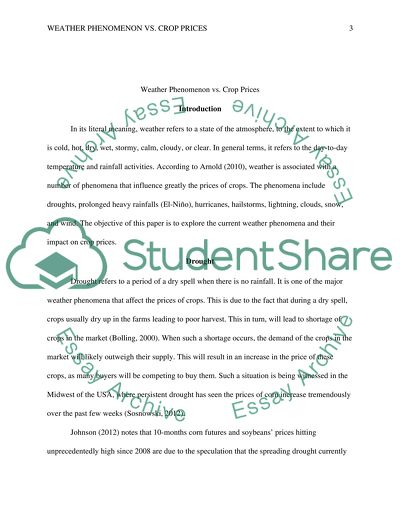 Download file to see previous pages These elements are composed of what is known as weather phenomena such a drought, hurricane, wind, heavy rainfall, and snow. Drought, for example, tends to destroy crops, thereby decreasing its supply in the market and increasing prices. Other weather phenomena also affect the prices of the crops commodities in different ways, as will be discussed in the paper. Weather Phenomenon vs. Crop Prices Introduction In its literal meaning, weather refers to a state of the atmosphere, to the extent to which it is cold, hot, dry, wet, stormy, calm, cloudy, or clear. In general terms, it refers to the day-to-day temperature and rainfall activities. According to Arnold (2010), weather is associated with a number of phenomena that influence greatly the prices of crops. The phenomena include droughts, prolonged heavy rainfalls (El-Nino), hurricanes, hailstorms, lightning, clouds, snow, and wind. The objective of this paper is to explore the current weather phenomena and their impact on crop prices. Drought Drought refers to a period of a dry spell when there is no rainfall. It is one of the major weather phenomena that affect the prices of crops. This is due to the fact that during a dry spell, crops usually dry up in the farms leading to poor harvest. This in turn, will lead to shortage of crops in the market (Bolling, 2000). When such a shortage occurs, the demand of the crops in the market will likely outweigh their supply. This will result in an increase in the price of these crops, as many buyers will be competing to buy them. Such a situation is being witnessed in the Midwest of the USA, where persistent drought has seen the prices of corn increase tremendously over the past few weeks (Sosnowski, 2012). Johnson (2012) notes that 10-months corn futures and soybeans’ prices hitting unprecedentedly high since 2008 are due to the speculation that the spreading drought currently witnessed in the Midwest of the US will cut the US’s supplies of these crops, as it is the world’s largest producer of the crops. This was after the meteorological department predicted that the Midwest would experience unusually hot and dry spell in the next 10 days, as occasional light showers would be too little for more than brief crop improvements. Gim Gerlach was reported as saying that the crops are shrinking daily, while prices are shooting up for less available supply of crops for domestic use and export (Johnson, 2012). Statistically, corn futures for December supply jumped 4.4% to close at $7.725 per bushel on the Chicago Board of Trade. The trade market also had hit $7.78 high early on. This general increase in corn and soybeans due to the drought would also probably lead to inflation. Demand and supply curve: Price S2 S1 P2 D2 P1 D1 D Q2 Q1 Quantity Before the drought hit Midwest, production of corn stood at Q1 at S1 supply curve while price charged was P1and demand D1. However, after the drought hit the country, the supply curve shifted to S2 and the quantity supplied moved to Q2, thereby increasing prices from P1 to P2. The price increase in this case was caused by a fall in supply of corn, as people scrambled for the few remains, shifting the demand to D2. Adequate Rainfall Theoretically, farmers perceive rainy seasons as a period of bumper harvest. This is because the proper frequency of rainfalls leads to a good yield (Libecap & Steckel, 2010). The result would be that there would be enough supply of the crop in question to feed the nation and to export. Similarly, the forces of demand and supply would help determine the prices of the crops. Since supply would be high, this means ...Download file to see next pages Read More
Share:
Tags
Cite this document
(“Weather Phenomenons vs. Crop Prices Essay Example | Topics and Well Written Essays - 1750 words”, n.d.)
Weather Phenomenons vs. Crop Prices Essay Example | Topics and Well Written Essays - 1750 words. Retrieved from https://studentshare.org/macro-microeconomics/1454746-weather-phenomenons-vs-crop-prices

CHECK THESE SAMPLES OF Weather Phenomenons vs. Crop Prices

The main differences between the approaches made by American society and the Barbarian society were the purpose behind the invasions. The American society invaded Afghanistan after facing violent attacks from the Islamic anti-social groups. However, the Barbarian invasions in Rome signified the use of power by the leaders in order to capture territories and increase their kingdom. The main purpose behind the attacks made by the U.S. administration was to eliminate the terrorist groups from the world and make the world free f...
10 Pages (2500 words) Essay
sponsored ads
Save Your Time for More Important Things
Let us write or edit the essay on your topic "Weather Phenomenons vs. Crop Prices" with a personal 20% discount.
GRAB THE BEST PAPER

Let us find you another Essay on topic Weather Phenomenons vs. Crop Prices for FREE!