Comments (0)
Add to wishlistDelete from wishlist
Cite this document
Summary
The article by Professor Romer looks into the controversy dealing with endogenous growth versus exogenous growth in the context of developing versus developed nations. The endogenous growth model approach is altogether opposed to the neo-classical model of growth. …
Download full paperFile format: .doc, available for editing
HIDE THIS PAPERGRAB THE BEST PAPER97.3% of users find it useful 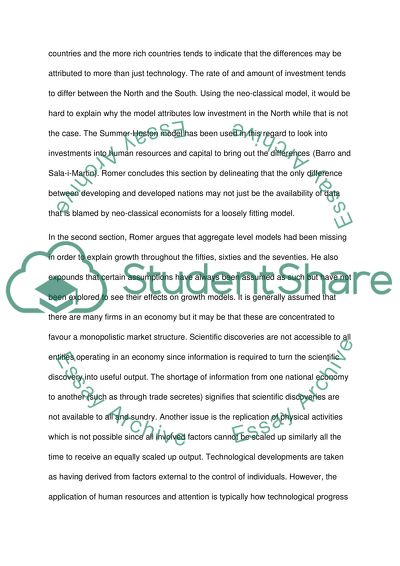 Download file to see previous pages The paper focuses on endogenous growth and utilises two major approaches to deal with the issue. These are namely the convergence controversy approach and the state of market competition (Romer). Romer’s contention is to fill out gaps in existing endogenous theory to make it more accountable for growth patterns in developing and developed countries.
Historically the neo-classical model has attributed economic growth to technology. Another basic assumption is that technology is freely available to all countries in the world since a perfect competition market exists (Rebelo). Romer uses the Cobb-Douglas production and cross-country regression models in order to highlight that endogenous factors can better explain such growth than exogenous models. He attributes growth to investments in human capital, innovation and knowledge whose spill over effects tend to augment the economy as a whole . The Philippines has been compared to the United States in order to bring out the savings rates that would be required by both nations to possess an equal level of economic growth. Romer argues that if the Philippines and the United States possessed the same level of technology, then their differing growth rates could be attributed to differences in labour productivity alone. It has been estimated that the share of investment in the United States is at least twice as large as it would have to be in the Philippines for a similar rate of growth. The lack of convergence between the growth rates for poorer countries and the more rich countries tends to indicate that the differences may be attributed to more than just technology. The rate of and amount of investment tends to differ between the North and the South. Using the neo-classical model, it would be hard to explain why the model attributes low investment in the North while that is not the case. The Summer-Heston model has been used in this regard to look into investments into human resources and capital to bring out the differences (Barro and Sala-i-Martin). Romer concludes this section by delineating that the only difference between developing and developed nations may not just be the availability of data that is blamed by neo-classical economists for a loosely fitting model. In the second section, Romer argues that aggregate level models had been missing in order to explain growth throughout the fifties, sixties and the seventies. He also expounds that certain assumptions have always been assumed as such but have not been explored to see their effects on growth models. It is generally assumed that there are many firms in an economy but it may be that these are concentrated to favour a monopolistic market structure. Scientific discoveries are not accessible to all entities operating in an economy since information is required to turn the scientific discovery into useful output. The shortage of information from one national economy to another (such as through trade secretes) signifies that scientific discoveries are not available to all and sundry. Another issue is the replication of physical activities which is not possible since all involved factors cannot be scaled up similarly all the time to receive an equally scaled up output. Technological developments are taken as having derived from factors external to the control of individuals. However, the application of human resources and attention is typically how technological progress is derived. Hence, assuming that technological progress is an exogenous factor is highly misleading (Sachs and Warner). Additionally, economic entities with the power to create new information and knowledge often possess the power to manipulate the information and knowledge into monopolistic systems. This would indicate that the owner of the information a ...Download file to see next pagesRead More
Share:
Tags
Cite this document
(“Endogenous Growth Theory Essay Example | Topics and Well Written Essays - 750 words”, n.d.)
Endogenous Growth Theory Essay Example | Topics and Well Written Essays - 750 words. Retrieved from https://studentshare.org/macro-microeconomics/1451663-2-topic-endogenous-growth-theory

...Management Theory and Practice in the early childhood education industry This Report applies management theory into practice in the early childhood industry, especially in the context of women leaders. Management issues play a significant role in the academic sector, because early childhood professionals need higher levels of motivation in order to avoid burnout . As pointed out in a study by Osgood and Halsall (2007) where they carried out research to examine the position of women in leadership or management positions, a “glass ceiling” exists for women in the academic setting, which could significantly impair motivation. Since many of the individuals employed in the early education sector are women, addressing this issue is even more...
6 Pages(1500 words)Coursework
sponsored ads
Save Your Time for More Important Things
Let us write or edit the essay on your topic "Endogenous Growth Theory" with a personal 20% discount.
GRAB THE BEST PAPER

Let us find you another Essay on topic Endogenous Growth Theory for FREE!