Comments (0)
Add to wishlistDelete from wishlist
Cite this document
Summary
Economics focuses on both the micro and macro levels. The paper "The Philippines' Problems And Possible Policies" zeroes in on the macro economic levels of the Philippines and looks at the micro aspects of the Philippines. The Philippines’ economic prospects are favorably encouraging…
Download full paperFile format: .doc, available for editing
HIDE THIS PAPERGRAB THE BEST PAPER91.2% of users find it useful 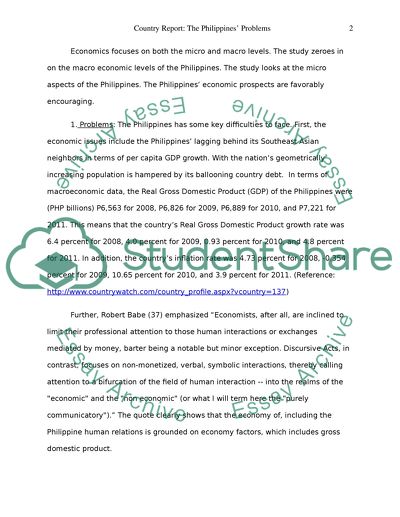 Extract of sample "The Philippines' Problems And Possible Policies"

Download file to see previous pages Robert Babe (37) emphasized "Economists, after all, are inclined to limit their professional attention to those human interactions or exchanges mediated by money, barter being a notable but minor exception. Discursive Acts, in contrast, focuses on non-monetized, verbal, symbolic interactions, thereby calling attention to a bifurcation of the field of human interaction -- into the realms of the "economic" and the "no economic" (or what I will term here the "purely communicator")." The quote clearly shows that the economy of, including the Philippine human relations, is grounded on economic factors, which includes gross domestic product.
To resolve the inflation issue of the Philippines, Don Paarlberg (159) states “A small group of economists, chiefly libertarians, propose taking the monetary system out of the hands of government and leaving it to private enterprise. Theoretically, the market would discipline the supply of money to keep its value at a stable level. This proposal has won acclaim from only a few. "Money cannot manage itself," said Bagehot, a nineteenth-century economist”. The government has the power to reduce the inflation rate by increasing the supply of money into the economy. Inflation is the increase in the prices of goods and commodities. Microeconomics also states that a decline in the demand for the products will reduce the demand and price of the product.
Second, the ethnic issues include a major portion of the country's population wallowing in poverty. Only a small percentage of the ethnic population is living in rich levels. The Philippines' ethical structure is 92 percent, Christian Malay, 4 percent Muslim Malay, 3 percent other ethnic groups, and 1% Chinese ethnic group. The economy is run by a majority of Christian Malays.
Third, the political issues include a democracy that is filled with many contradicting forces. The government is beset by allocating its scarce financial resources. The democratic government is patterned on the United States political government. Elections are made for the President, Vice President, Senators, Congressmen, Mayors, Governors, and other political leaders for a fixed term. With the democratic government, some persons use goons to force the people to elect the goon leaders as the elected government officials. Likewise, the democratic political system allows any person to use the money to buy votes from the people. Some of the poor residents accept the tradition of accepting money for their votes.
2. Projections: There are many positive prospects for this country and its economy. First, the country’s being a former colony of the United States gives it the American educational and societal advantage. The Filipinos can apply for jobs in other countries where the main language is English. Many ...Download file to see next pagesRead More
Share:
Tags
Cite this document
(“The Philippines' Problems And Possible Policies Essay”, n.d.)
The Philippines' Problems And Possible Policies Essay. Retrieved from https://studentshare.org/macro-microeconomics/1447131-the-philippines-problems-and-possible-policies

CHECK THESE SAMPLES OF The Philippines' Problems And Possible Policies

Coming to question 4, the average answer from participants is 2.7, which means that they are leaning more towards agreeing that marriage is important for a strong and enduring relationship. 53.4% of males agree with the fact that marriage is important for a strong and enduring relationship while 66.1% of females agree with this question.
Beginning with question 5, 5% of males agree on this question. On the other hand, 50% of women agree. This, therefore, means that more women (45% more) agree on this question compared to men. It may also be a pointer to the sensitive and caring nature of women since more of them believe that they are responsible for their spouses even up to the point of making decisions for them. Question 6 a...
6 Pages(1500 words)Assignment
sponsored ads
Save Your Time for More Important Things
Let us write or edit the essay on your topic "The Philippines' Problems And Possible Policies" with a personal 20% discount.
GRAB THE BEST PAPER

Let us find you another Essay on topic The Philippines' Problems And Possible Policies for FREE!