Comments (0)
Add to wishlistDelete from wishlist
Cite this document
Summary
This essay has considered the extent that the effectiveness of transition strategies is dependent on the initial conditions of the transition economies. This research has considered the issue from a variety of theoretical perspectives. …
Download full paperFile format: .doc, available for editing
HIDE THIS PAPERGRAB THE BEST PAPER92.4% of users find it useful 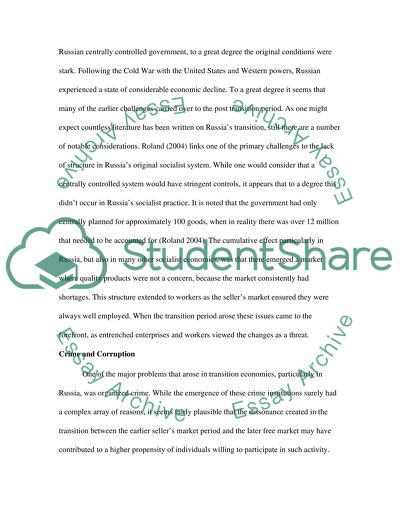 Download file to see previous pages The changing economic landscape in the last century has brought with it considerable political and social change. In terms of theoretical and scholarly research some of the most prominent considerations have been in terms of the shift between developing, emerging, and first worlds. Within this context of understanding one recognizes that a central area of concern has been transition economies. Transition economies are those where a nation is shifting from a centrally planned economy to a free market. Within the modern world environment this has become a highly complex notion as nations such as China have seemingly transcended traditional bounds of the centrally planned economy and combined state-sponsored industries with aspects of the free market. Still, to a large degree the traditional structural boundaries of the transition economy still hold. This essay considers the extent that the effectiveness of transition strategies is dependent on the initial conditions of the transition economies.
Russia
While the subject of transition economy strategies is complex and multi-varied, one of the central understandings is that there has been considerable difference regarding success among these transition countries. One recognizes that while there may be no objective or prescriptive approach to successful transition, one of the most thematic elements has been that the most successful transition economies have been linked to the success of the initial conditions of the transition economy. This is a complex notion that demands deconstruction. One of the major considerations in these regards has been the Russian transition approach. While theorists disagree as to the original state of the Russian centrally controlled government, to a great degree the original conditions were stark. Following the Cold War with the United States and Western powers, Russian experienced a state of considerable economic decline. To a great degree it seems that many of the earlier challenges carried over to the post transition period. As one might expect countless literature has been written on Russia’s transition, still there are a number of notable considerations. Roland (2004) links one of the primary challenges to the lack of structure in Russia’s original socialist system. While one would consider that a centrally controlled system would have stringent controls, it appears that to a degree this didn’t occur in Russia’s socialist practice. It is noted that the government had only centrally planned for approximately 100 goods, when in reality there was over 12 million that needed to be accounted for (Roland 2004). The cumulative effect particularly in Russia, but also in many other socialist economies, was that there emerged a market where quality products were not a concern, because the market consistently had shortages. This structure extended to workers as the seller’s market ensured they were always well employed. When the transition period arose these issues came to the forefront, as entrenched enterprises and workers viewed the changes as a threat. Crime and Corruption One of the major problems that arose in transition economies, particularly in Russia, was organized crime. While the emergence of these crime institutions surely had a complex array of reasons, it seems fairly plausible that the dissonance created in the transition between the earlier seller’s market period and the later free market may have contributed to a higher propensity of individuals willing to participate in such activity. These occurrences attest to a level of carry over from dysfunctions in the pre-free market economy that would indicate that the original state of the economy has a direct impact on transition strategies. Boerner & Hainz (2009) support the notion that inefficient pre-liberalization economic states directly contribute to later era corruption practices. Specifically, “ ...Download file to see next pagesRead More
Share:
Tags
Cite this document
(“To What Extent Was the Effectiveness of Transition Strategies Essay”, n.d.)
To What Extent Was the Effectiveness of Transition Strategies Essay. Retrieved from https://studentshare.org/macro-microeconomics/1445038-to-what-extent-was-the-effectiveness-of-transition

Organizations have structures. Structures include degree or type such as horizontal differentiation, vertical differentiation, mechanism of coordination and control, formalization, and centralization of power. Classical theorists such as Taylor, Fayor, and Weber are of the belief that there is a single best way for organizations to be structured. However, organizations vary considerably on structural attributes. Modern theorists are of the belief that there is not one single best way to organize. An important aspect is a fit between the organization’s structure, size, technology and requirements of the environment. This is also known as the “contingency theory.” Size refers to the capacity, number of employees, o...
10 Pages(2500 words)Coursework
sponsored ads
Save Your Time for More Important Things
Let us write or edit the essay on your topic "To What Extent Was the Effectiveness of Transition Strategies Dependent on the Initial Conditions of the Transition Economies" with a personal 20% discount.
GRAB THE BEST PAPER

Let us find you another Essay on topic To What Extent Was the Effectiveness of Transition Strategies Dependent on the Initial Conditions of the Transition Economies for FREE!