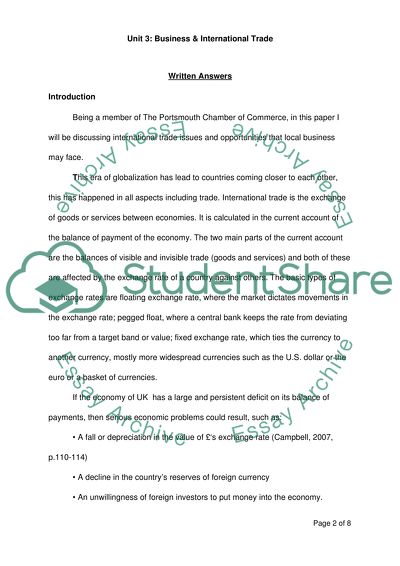 Download file to see previous pages The two main parts of the current account are the balances of visible and invisible trade (goods and services) and both of these are affected by the exchange rate of a country against others. The basic types of exchange rates are floating exchange rate, where the market dictates movements in the exchange rate; pegged float, where a central bank keeps the rate from deviating too far from a target band or value; fixed exchange rate, which ties the currency to another currency, mostly more widespread currencies such as the U.S. dollar or the euro or a basket of currencies. If the economy of UK has a large and persistent deficit on its balance of payments, then serious economic problems could result, such as: • A fall or depreciation in the value of ?‘s exchange rate (Campbell, 2007, p.110-114) • A decline in the country’s reserves of foreign currency • An unwillingness of foreign investors to put money into the economy. The business importance of these problems is likely to be most serious if: • The exchange rate depreciation (or frequent fluctuations in the exchange rate) make importing and exporting too risky (Bean, 2002, p.276) — see section below on exchange rates • The government takes corrective actions by, for example, limiting foreign exchange transactions and putting substantial controls on imports, such as tariffs and quotas (Dale & Haldane, 2005, p.1611-26). This policy (protectionist policy), used currently by Zimbabwe, might have short-term benefits by reducing imports of competitors’ products. However, serious consequences could also result. The policy could lead to retaliation by other countries that will then reduce export demand. Also, import controls are serious for firms that depend on imported supplies of raw materials. Question: How would an increase in the value of the ? against the $ and/or the € affect the price of UK exports and imports into the UK? (2.1a) Answer: When demand for a currency exceeds supply, its value will rise. This is called an appreciation because one unit of the currency will buy more units of other currencies. Exchange rate depreciation, on the other hand, is a fall in the external value of a currency as measured by its exchange rate against other currencies. If ?1 increases in value from €2 to €1.5, the value of the ? has appreciated (Fisher et al, 2007, p.19). The domestic firms that would gain from an appreciation of the country’s currency are: • Importers and exporters in the UK of foreign raw materials and components, for whom the domestic currency cost, of these imports will be falling — this increases their competitiveness. • Importers and exporters in the UK of foreign manufactured goods, who are’ able to import the product more cheaply in terms of domestic currency —in 2008, it was claimed that European importers of US-produced cars were profiteering at the expense of consumers(Britton & Whitley, 2007,p. 152-62). This was because, although the import price of cars was falling due, to the appreciation of the euro against the US dollar, they were not selling them more cheaply to European consumers. Hence, they were taking advantage of the appreciation to make much higher profits (Calvo, 2003, p.383-98). • Lower import prices will help to reduce the rate of inflation for the whole economy and all firms are likely to gain from this more stable position. The domestic fir ...Download file to see next pagesRead More
Share:
Tags
Cite this document
(“Business & International Trade Assignment Example | Topics and Well Written Essays - 1000 words”, n.d.)
Retrieved from https://studentshare.org/macro-microeconomics/1423315-business-international-trade
(Business & International Trade Assignment Example | Topics and Well Written Essays - 1000 Words)
https://studentshare.org/macro-microeconomics/1423315-business-international-trade.
“Business & International Trade Assignment Example | Topics and Well Written Essays - 1000 Words”, n.d. https://studentshare.org/macro-microeconomics/1423315-business-international-trade.
Comments (0)
Click to create a comment or rate a document

... sense power consumption and power quality. A modest sheet of paper, 50,000 thinner than human hair, when stacked, nets a material 500 times stronger than steel and is changing the way airplanes, automobiles and electronics are made (Alpern, 2009). International Technological collaborations are taking place in the form of strategic alliances, joint ventures and intimate supplier-producer relationships. Such collaborations include activities such as joint development agreements, technology sharing and R&D contracts amongst others (Rycroft, 2002). ICT has pervaded every aspect of business and today the value chain depends on the use of technology to link the customers and suppliers. In the current dynamic and global markets, technology...
7 Pages(1750 words)Coursework
sponsored ads
Save Your Time for More Important Things
Let us write or edit the assignment on your topic "Business & International Trade" with a personal 20% discount.
GRAB THE BEST PAPER

Let us find you another Assignment on topic Business & International Trade for FREE!