Comments (0)
Add to wishlistDelete from wishlist
Cite this document
Summary
1. With reference to international trade and investment theory, briefly outline the main purpose of the European Union and the significance of the Single European Market for an EU-based business. International trade is the exchange of goods and services between countries…
Download full paperFile format: .doc, available for editing
HIDE THIS PAPERGRAB THE BEST PAPER98.6% of users find it useful 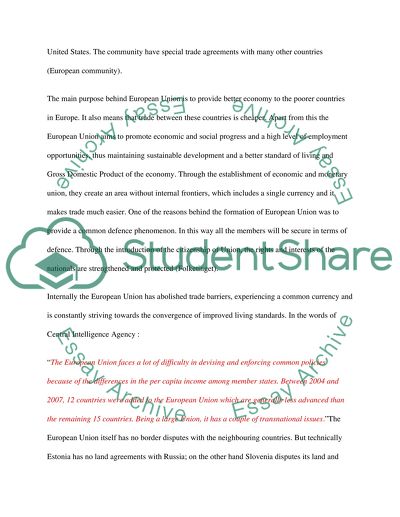 Download file to see previous pages When we talk about a country Comparative advantage, they are the Superior features of a country which provide it with unique benefits in global competition derived weather from national endowments or deliberate national policies. It is concept that helps answers the question all nations can gain and sustain national economic superiority. Competitive Advantage of a country’s firm is distinctive assets or competencies of a company derived from its size, assets, innovation strengths which are difficult for its competitors to duplicate or imitate. In other words the concepts tells us how a firm can gain and sustain distinctive competence vis a vis competitors. (Theories of International Trade and Investment, 2008) Single Market - European Union The European Union is a group of Western European nations working to unite the economic resources into a single economy. It is a group of 27 member states which have been united to create a political and economic community throughout Europe. The European Union imports and exports more than any one country in the world. The community’s chief trade partner is the United States. The community have special trade agreements with many other countries (European community). The main purpose behind European Union is to provide better economy to the poorer countries in Europe. It also means that trade between these countries is cheaper. Apart from this the European Union aims to promote economic and social progress and a high level of employment opportunities, thus maintaining sustainable development and a better standard of living and Gross Domestic Product of the economy. Through the establishment of economic and monetary union, they create an area without internal frontiers, which includes a single currency and it makes trade much easier. One of the reasons behind the formation of European Union was to provide a common defence phenomenon. In this way all the members will be secure in terms of defence. Through the introduction of the citizenship of Union, the rights and interests of the nationals are strengthened and protected (Folketinget). Internally the European Union has abolished trade barriers, experiencing a common currency and is constantly striving towards the convergence of improved living standards. In the words of Central Intelligence Agency : “The European Union faces a lot of difficulty in devising and enforcing common policies because of the differences in the per capita income among member states. Between 2004 and 2007, 12 countries were added to the European Union which are generally less advanced than the remaining 15 countries. Being a large Union, it has a couple of transnational issues.”The European Union itself has no border disputes with the neighbouring countries. But technically Estonia has no land agreements with Russia; on the other hand Slovenia disputes its land and maritime boundaries with Croatia. Similarly Spain has territorial and maritime issues with Morocco and with the UK over Gibraltar (Central Intelligence Agency). A single market is a trading bloc. It comprises of a free trading are and has common policies. There is freedom of movement where assets like land, labour, capital and enterprise are concerned. The main objective is that these factors of production are mobile. All the trade barriers, whether it be in the form of ...Download file to see next pagesRead More
Share:
Tags
Cite this document
(“International Business Essay Example | Topics and Well Written Essays - 2000 words”, n.d.)
Retrieved from https://studentshare.org/environmental-studies/1404707-international-business
(International Business Essay Example | Topics and Well Written Essays - 2000 Words)
https://studentshare.org/environmental-studies/1404707-international-business.
“International Business Essay Example | Topics and Well Written Essays - 2000 Words”, n.d. https://studentshare.org/environmental-studies/1404707-international-business.
Comments (0)
Click to create a comment or rate a document

As a matter of fact, Hoffman’s statement that “international affairs is the nemesis of liberalism” has a grain of truth in it and this is especially so after the 9/11 incident.
There are two schools of thought or perspectives that are used to view international affairs: liberalism and realism. The study of these two perspectives is significant to the idea posed by Stanley Hoffman because they determine the reasons why international affairs, according to him, does not only see eye-to-eye with liberalism but seems to stand on the opposing side of it.
Liberalism can be defined as having four elements: citizens; the legislature; property rights, and; a market-driven economy (Dunne 186). Realism, on the othe...
6 Pages(1500 words)Assignment
sponsored ads
Save Your Time for More Important Things
Let us write or edit the essay on your topic "International Business" with a personal 20% discount.
GRAB THE BEST PAPER