Comments (0)
Add to wishlistDelete from wishlist
Cite this document
Summary
The writer of the following essay seeks to summarize the Adam Smith's writing "The Division of Labor". Furthermore, the writer of the essay investigates the practical value of Smith's work, describing its potential application and how it can boost the industrial performance…
Download full paperFile format: .doc, available for editing
HIDE THIS PAPERGRAB THE BEST PAPER93.4% of users find it useful 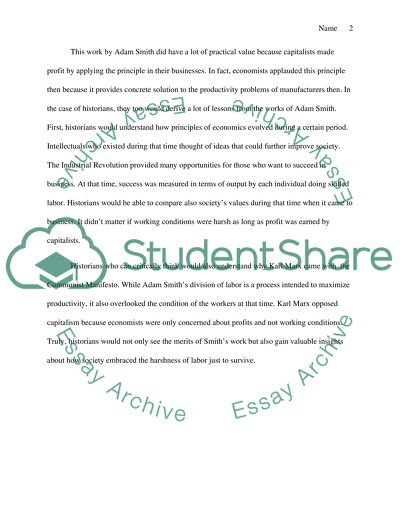 ﻿ The Division of Labor
The Division of Labor was written by the renowned economist Adam Smith in the eighteenth century. It was part of his work An Inquiry into the Nature and Causes of the Wealth of Nations published in 1776. This writing became popular because it made a good analysis of the current state of economy during the Industrial Revolution. Since the main goal of industries during that period was to produce goods at the least possible expense, Smith’s division of labor was embraced by most industrialists during that time. Here is the summary of Smith’s writing.
Before Smith introduced the concept to society it was thought that productivity can be increased when workers are highly-skilled in performing the tasks assigned to them. However, there are three circumstances involved in this belief: increase the dexterity of every worker, time-saving mechanism, and utilization of machines that increase efficiency. Hence, a worker must have enough skill to perform his job and familiarize himself in operating a machine to produce maximum output. Smith cited the case of a pin maker who would likely produce only one pin a day without the two factors mentioned. However, if the concept of division of labor is applied, laborers could specialize in one task alone, which can result to greater productivity. Smith himself has witnessed workers who were inadequately skilled at making pins yet because of the specialized tasks assigned to them, ten workers can produce 48,000 pins in a day. In the end, Smith popularized this principle, which shows that lack of skill nor machines are not really obstacles to productivity. Ever since, this has changed the landscape of manufacturing industries as early as the Industrial Revolution.
This work by Adam Smith did have a lot of practical value because capitalists made profit by applying the principle in their businesses. In fact, economists applauded this principle then because it provides concrete solution to the productivity problems of manufacturers then. In the case of historians, they too would derive a lot of lessons from the works of Adam Smith. First, historians would understand how principles of economics evolved during a certain period. Intellectuals who existed during that time thought of ideas that could further improve society. The Industrial Revolution provided many opportunities for those who want to succeed in business. At that time, success was measured in terms of output by each individual doing skilled labor. Historians would be able to compare also society’s values during that time when it came to business. It didn’t matter if working conditions were harsh as long as profit was earned by capitalists.
Historians who can critically think would also understand why Karl Marx came with the Communist Manifesto. While Adam Smith’s division of labor is a process intended to maximize productivity, it also overlooked the condition of the workers at that time. Karl Marx opposed capitalism because economists were only concerned about profits and not working conditions. Truly, historians would not only see the merits of Smith’s work but also gain valuable insights about how society embraced the harshness of labor just to survive. Read More
Share:
Tags
Cite this document
(“The Current State of Economy in The Division of Labor Essay”, n.d.)
The Current State of Economy in The Division of Labor Essay. Retrieved from https://studentshare.org/macro-microeconomics/1417833-analysis-essay

“The Current State of Economy in The Division of Labor Essay”, n.d. https://studentshare.org/macro-microeconomics/1417833-analysis-essay.
Comments (0)
Click to create a comment or rate a document

The issue comes into focus, whenever there are political, economic debates or talks about H1B visa limits. The economic slowdown has further led to the intensification of these debates. But, despite apprehensions from different quarters, neither the companies nor the government has said a final word on the trend. Increasing levels of competition amongst the corporate houses have been one of the key highlights of the globalization era. Be it the retail sector, the banking, the automobile, the IT-enabled services, the white goods space, etc. the companies have always been on the lookout for reaching out to more number of customers while doing everything possible to please the existing lot. Leveraging the economies of scale has prove...
8 Pages(2000 words)Coursework
sponsored ads
Save Your Time for More Important Things
Let us write or edit the essay on your topic "The Current State of Economy in The Division of Labor" with a personal 20% discount.
GRAB THE BEST PAPER

Let us find you another Essay on topic The Current State of Economy in The Division of Labor for FREE!