Comments (0)
Add to wishlistDelete from wishlist
Cite this document
Summary
In today’s world, it is everyone’s wish to own a house; indeed, this is not an impossible mission when funds are available. Citizens are normally differentiated by the amount of money they hold, their salary, and investments or savings they make…
Download full paperFile format: .doc, available for editing
HIDE THIS PAPERGRAB THE BEST PAPER94.7% of users find it useful 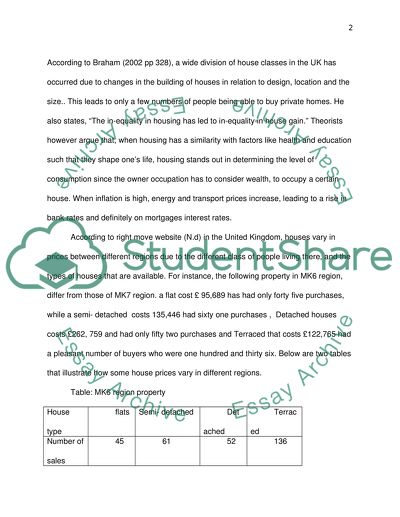 Extract of sample "House prices in the UK"

Download file to see previous pages In today’s world, it is everyone’s wish to own a house; indeed, this is not an impossible mission when funds are available. Citizens are normally differentiated by the amount of money they hold, their salary, and investments or savings they make. That is why real estate owners construct houses of different quality and different sizes, with an aim to cater for every citizen of a country. With the constructors work done, it is up to the owners to decide on house prices, depending on the quality, location, and prestige among other factors. Most people opt for cheaper houses or flats and give up their dream of a mansions or bungalows, depending on their income and financial capability. In most cases, a rise in inflation usually leads to an increase in the mortgages rates and high interest rates associated with the mortgage. In the United Kingdom, high prices of houses may render some citizens to failure of affording to purchase a house. In addition, high house prices have caused shortage of workers in London and the South East, as most people are unable to afford such high prices. Therefore, the high level of unemployment is another factor that has led to low demand for house purchase (Newnes, 2011).According to Williams and Pannell (2006 pp 352), “housing is not an ordinary commodity and does not behave in an ordinary way since it is a long–term asset, requires heavy machinery, it is geographically fixed, and involves legal procedures.” The authors further argue that, it is not obvious that houses built are always affordable. According to Braham (2002 pp 328), a wide division of house classes in the UK has occurred due to changes in the building of houses in relation to design, location and the size.. This leads to only a few numbers of people being able to buy private homes. He also states, “The in-equality in housing has led to in-equality in house gain.” Theorists however argue that, when housing has a similarity with factors like health and education such that they shape one’s life, housing stands out in determining the level of consumption since the owner occupation has to consider wealth, to occupy a certain house. When inflation is high, energy and transport prices increase, leading to a rise in bank rates and definitely on mortgages interest rates. According to right move website (N.d) in the United Kingdom, houses vary in prices between different regions due to the different class of people living there, and the types of houses that are available. For instance, the following property in MK6 region, differ from those of MK7 region. a flat cost ? 95,689 has had only forty five purchases, while a semi- detached costs 135,446 had sixty one purchases , Detached houses costs ?262, 759 and had only fifty two purchases and Terraced that costs ?122,765 had a pleasant number of buyers who were one hundred and thirty six. Below are two tables that illustrate how some house prices vary in different regions. Table: MK6 region property House type flats Semi- detached Detached Terraced Number of sales 45 61 52 136 Price paid ?95,689 ?135,446 ?262,759 ?122,765 For MK7 region, a flat costs ?119,598 and the purchases made are 49, while a semi- detached property goes for ?115,900 and has approximately 86 purchases. A detached property costs ?290, 618 and has a total purchase of 124 and finally, a terraced property costs ?126,351, with only 83 purchases. If we compare these same properties but from different regions, we can agree that house, prices differ in different regions of the United Kingdom. Table 2: MK 7 region House type flats Semi- detached Detached Terraced house Number of sales 49 86 124 83 Price paid ?119,598 ? 115,900 ? 290, 618 ?126,351 Source: ...Download file to see next pagesRead More
Share:
Tags
Cite this document
(“House prices in the UK Essay Example | Topics and Well Written Essays - 1000 words”, n.d.)
Retrieved from https://studentshare.org/macro-microeconomics/1412141-house-prices-in-the-uk
(House Prices in the UK Essay Example | Topics and Well Written Essays - 1000 Words)
https://studentshare.org/macro-microeconomics/1412141-house-prices-in-the-uk.
“House Prices in the UK Essay Example | Topics and Well Written Essays - 1000 Words”, n.d. https://studentshare.org/macro-microeconomics/1412141-house-prices-in-the-uk.
Comments (0)
Click to create a comment or rate a document

CHECK THESE SAMPLES OF House prices in the UK

The housing industry is divided into residential, commercial and industrial segments. Economists define supply in terms of service units, that is, a physical unit can be deconstructed into the services that it helps provide. These housing unit services are considered as an unobservable theoretical construct. Housing stock depreciates making it qualitatively different from a brand new constructed building.
The owner, user/owner and renter comprise the demand side of the housing market while the renovators and developers comprise the supply side of the market. In order to implement the simple demand and supply analysis to the housing markets, several modifications have to be made to the standard microeconomic procedures and ass...
8 Pages(2000 words)Research Paper
sponsored ads
Save Your Time for More Important Things
Let us write or edit the essay on your topic "House prices in the UK" with a personal 20% discount.
GRAB THE BEST PAPER

Let us find you another Essay on topic House prices in the UK for FREE!