Labor Unions and Their Impact on the Economy - Essay Example

Comments (0)
Add to wishlistDelete from wishlist
Cite this document
Summary
In this research paper, the situation in Wisconsin after such decision of the government and that of the labor unions will be reviewed. Arguments both in favor and against the acts of the labor unions will be presented and a final conclusion either in support or against the scenario will be drawn up…
Download full paperFile format: .doc, available for editing
HIDE THIS PAPERGRAB THE BEST PAPER92.1% of users find it useful 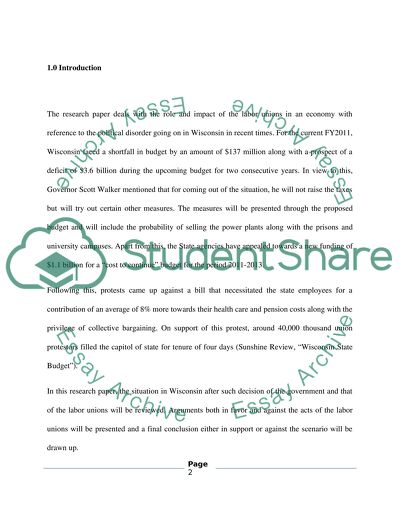 Extract of sample "Labor Unions and Their Impact on the Economy"

Download file to see previous pages The state employees are not happy with the proposal of the governor that they would have to make a contribution of 5.8 % of their salary towards schemes of pension along with the payment of 12.6 % of their insurance premiums for health.
In this section of the research paper, various arguments in support of the union’s protest will be presented.
2.1 “Wisconsin Governor is Against the Worker’s Rights”- Protest in Madison
On February 15, 2011, the public employees, community supporters and union activists in a number of more than 15,000 jammed at the Capitol Square in Madison for protesting the governor’s plan to band the rights of the workers and demolish jobs of the middle-class community of the society. The governor denied making any changes in his plans and has mentioned that if the bill is not passed by the state legislature, he would compel massive layoffs along with hampering of state services and thus would cost several jobs.
According to a highway worker and member of AFSCME, the attack on the worker’s rights is a part of the budget plan of the governor. The move of the governor has been demonstrated as a way of political business that is interested in taking the rights away from the people. The appeal of a few protestors is such that they are in complete support to the governor’s activities for balancing the budget but not at the sake of the worker’s rights, as evident from the views of a retired Communications Workers of America member. The protestors mentioned that the governor was imparting the bad effects of a budget bill by setting up such a policy that would take away the general rights of the people (American Federation of State, County and Municipal Employees, ...Download file to see next pagesRead More
Share:
Tags
Cite this document
(“Labor Unions and Their Impact on the Economy Essay”, n.d.)
Retrieved from https://studentshare.org/macro-microeconomics/1408688-labor-unions-and-their-impact-on-the-economy
(Labor Unions and Their Impact on the Economy Essay)
https://studentshare.org/macro-microeconomics/1408688-labor-unions-and-their-impact-on-the-economy.
“Labor Unions and Their Impact on the Economy Essay”, n.d. https://studentshare.org/macro-microeconomics/1408688-labor-unions-and-their-impact-on-the-economy.
Comments (0)
Click to create a comment or rate a document

Keeping in view the high level of daily usage of social networking sites like Facebook, Twitter, YouTube, Google+ and LinkedIn, companies have taken advantage of them by making ‘pages’ on Facebook which are accessible by the millions of Facebook users. The pages can be thought of as modern yellow page records. Twitter offers a ‘tweet’ option as a message which can be seen automatically on the homepages of those who follow it, and those who don’t follow it can also access them by visiting the company’s twitter profile. These can be used to catch the eyes of followers for new promotions and packages. By using the hashtag option (a # sign followed by a word or phrase) users can come across the comp...
6 Pages(1500 words)Term Paper

Austria or you may call is the Republic of Austria in official terminology is located in Central Europe. Although the population figures do not touch the danger limit but the talent and resources are worthwhile there. Germany and Hungry are also near this region. Italy is in the south of Austria. Switzerland will be seen in the west. So, now you can realize the importance of this region clearly.
The GDP is also impressive here. You can say the economy is strong and it has much depth. The strong social market economy is the result of development and proper management by the government (DArt & Turner 2008). Traders find flexibility in business operations. Labor has a positive approach to work and jobs.
There was a tren...
9 Pages(2250 words)Term Paper
sponsored ads
Save Your Time for More Important Things
Let us write or edit the essay on your topic "Labor Unions and Their Impact on the Economy" with a personal 20% discount.
GRAB THE BEST PAPER

Let us find you another Essay on topic Labor Unions and Their Impact on the Economy for FREE!