The Political and Economic Integration of Europe - Essay Example

Comments (0)
Add to wishlist Delete from wishlist
Cite this document
Summary
This essay discusses and explains the level of integration of the EU in terms of economy and politics. This study shows the presence of a gap between the EU’s North and South, in all economic and political segments. It is argued, that political and economic integration of Europe is still underway…
Download full paper File format: .doc, available for editing
HIDE THIS PAPERGRAB THE BEST PAPER91.1% of users find it useful 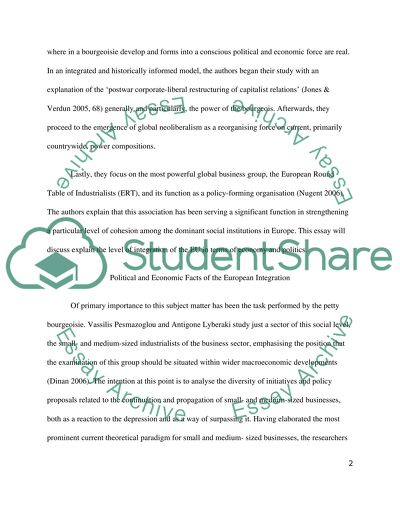 Extract of sample "The Political and Economic Integration of Europe"

Download file to see previous pages hors explain that this association has been serving a significant function in strengthening a particular level of cohesion among the dominant social institutions in Europe. This essay will discuss explain the level of integration of the EU in terms of economy and politics. Political and Economic Facts of the European Integration Of primary importance to this subject matter has been the task performed by the petty bourgeoisie. Vassilis Pesmazoglou and Antigone Lyberaki study just a sector of this social level, the small- and medium-sized industrialists of the business sector, emphasising the position that the examination of this group should be situated within wider macroeconomic developments (Dinan 2006). The intention at this point is to analyse the diversity of initiatives and policy proposals related to the continuation and propagation of small- and medium-sized businesses, both as a reaction to the depression and as a way of surpassing it. Having elaborated the most prominent current theoretical paradigm for small and medium- sized businesses, the researchers then analyse the information at hand, contending more particularly with concerns regarding work conditions, compensation, and employment production, as well as the operation of business districts (O’Brennan 2006). Their claim is that the context of the EU provides some relevant ideas regarding the policy matters concerned in the reinforcement of smaller organisations. Nevertheless, the authors argue that small- and medium-sized businesses within the EU will confront some challenging difficulties, such as competition with and adjustment to bigger companies, corporations, and multinationals (Dinan 2006). This discussion about the petty bourgeoisie will demonstrate how the group serves as a contributing force...
This paper provides a comprehensive review of the ongoing process of political and economic integration in Europe from different perspectives, using different studies by economists on the subject.
A significant gap exists between the peripheral and the central regions of Europe, in all three political economic segments.In the agricultural sector, the South mirrors developing nations more than developed ones. The manufacturing segment also verifies this dualism, with the fact that the North has a lead in the accumulation of human capital, whereas the South focuses in resource-exhaustive goods and services Ultimately, in the service area the South and the North encounter qualitative disparities, particularly in commercial services. These structural gaps have a tendency to orient the drive and the makeup of the capitalist class in the EU.
The political parties of Europe express and voice out political, economic, and social interests mostly within the institutionalised instrument of the European Parliament. The functions and duties of the EP, and alongside those of its political parties, have altered remarkably since the late 1970s, when the initial Euro-elections took place. The mutual relationship between the EP and the parties has become more and more substantial, and become one of the attributes of institutional growth throughout the 1990s
An issue which has been studied in the EU is the manner social interests are voiced and manifested. Social interests are articulated at the political stage through political parties.
...Download file to see next pages Read More
Share:
Tags
Cite this document
(“The Political and Economic Integration of Europe Essay”, n.d.)
Retrieved from https://studentshare.org/macro-microeconomics/1406078-the-political-and-economic-integration-of-europe

(The Political and Economic Integration of Europe Essay)
https://studentshare.org/macro-microeconomics/1406078-the-political-and-economic-integration-of-europe.

“The Political and Economic Integration of Europe Essay”, n.d. https://studentshare.org/macro-microeconomics/1406078-the-political-and-economic-integration-of-europe.
Comments (0)
Click to create a comment or rate a document

CHECK THESE SAMPLES OF The Political and Economic Integration of Europe

Man has lost touch with the environment to gather his own empirical evidence, study it vis-à-vis the knowledge handed him down the generations and make his independent judgment. Thus his thinking process is chained to the scientific and economic superstructure.
The early part of the twentieth century saw the emergence of the knowledge society. The transmission of knowledge propels social and economic change. Out of the knowledge, society grew the energy-guzzling and environmentally unfriendly consumer society. On the vestiges of consumer society now emerges the anxiety-laden risk fraught society Man, the main protagonist, knows little of his importance and is in haste to accomplish things, knowing-well the risk fraught...
6 Pages (1500 words) Assignment

In the nineteenth century, the term democracy still had uncomplimentary connotations, most of the time; some understand it as a system of mob rule. Now, however, we are all democrats. Liberals, conservatives, socialists, communists, anarchists, and even fascists are all eager to proclaim the virtues of democracy and to demonstrate their own democratic credentials. Indeed, as the major ideological systems faltered and collapsed in the late twentieth century, the flames of democracy appear to burn yet more strongly (Huth & Allee, 2003). As the pull of socialism paled, and the intrinsic worth of capitalism has been called into query, democracy appeared as possibly the single unwavering and lasting principle in the postmodern poli...
6 Pages (1500 words) Assignment

Austria or you may call is the Republic of Austria in official terminology is located in Central Europe. Although the population figures do not touch the danger limit but the talent and resources are worthwhile there. Germany and Hungry are also near this region. Italy is in the south of Austria. Switzerland will be seen in the west. So, now you can realize the importance of this region clearly.
The GDP is also impressive here. You can say the economy is strong and it has much depth. The strong social market economy is the result of development and proper management by the government (DArt & Turner 2008). Traders find flexibility in business operations. Labor has a positive approach to work and jobs.
There was a tren...
9 Pages (2250 words) Term Paper
sponsored ads
Save Your Time for More Important Things
Let us write or edit the essay on your topic "The Political and Economic Integration of Europe" with a personal 20% discount.
GRAB THE BEST PAPER

Let us find you another Essay on topic The Political and Economic Integration of Europe for FREE!