Comments (0)
Add to wishlist Delete from wishlist
Cite this document
Summary
This paper critically assesses the potential role of renminbi as a future international reserve currency and evaluates pros and cons of such change of the role of Chinese currency. There are many reasons, specified in the paper, for the yuan to be considered as a viable alternative to dollar…
Download full paper File format: .doc, available for editing
HIDE THIS PAPERGRAB THE BEST PAPER91.7% of users find it useful 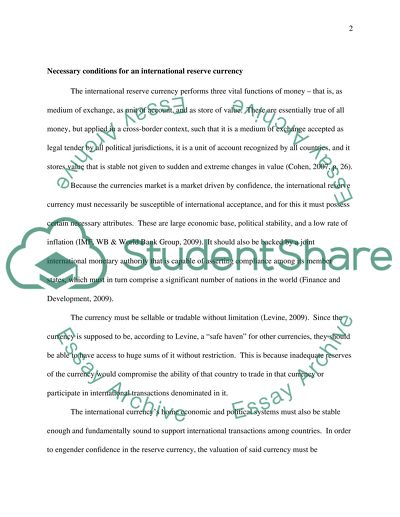 Download file to see previous pages These are large economic base, political stability, and a low rate of inflation (IMF, WB & World Bank Group, 2009). It should also be backed by a joint international monetary authority that is capable of asserting compliance among its member states, which must in turn comprise a significant number of nations in the world (Finance and Development, 2009). The currency must be sellable or tradable without limitation (Levine, 2009). Since the currency is supposed to be, according to Levine, a “safe haven” for other currencies, they should be able to have access to huge sums of it without restriction. This is because inadequate reserves of the currency would compromise the ability of that country to trade in that currency or participate in international transactions denominated in it. The international currency’s home economic and political systems must also be stable enough and fundamentally sound to support international transactions among countries. In order to engender confidence in the reserve currency, the valuation of said currency must be transparent to all for them to consider holding that currency in significant quantities. Because the determination of value is for the most part subjective, the matter of the country’s governance may not be concealed from the world, and therefore the political ideology of the country must be supportive of full disclosure (Cohen, 2007). Recent developments that triggered the search for a substitute It has already been mentioned that the large current account deficit and huge public debt of the United States are primarily responsible for the weakness of the dollar as the primary medium of exchange. Ordinarily,...
This paper presents a comprehensive analysis, that aims to determine whether or not the renminbi would provide a real substitute for the dollar as principal international reserve currency within the next ten years, and whether such a substitution will stabilize the global currency market and prevent further recurrences of financial crises as the world had experienced in the past.
The international reserve currency performs three vital functions of money – that is, as medium of exchange, as unit of account, and as store of value.
There are many reasons for the yuan to be considered as a possible alternative, the most important of which is its position as the top trading country in the world. It has amassed some 3 trillion dollars worth of international reserves, two-thirds of which is in U.S. dollars, thus this country is capable of exerting economic pressure on the U. S. Yearly it experiences record current account surpluses, compared to the U.S.’s accumulating current account deficit and public debt.
Despite these positive factors, there are also serious concerns. China’s financial markets are still highly restricted, and its currency is still unable to trade in open market, let alone be freely converted into other currencies. Other than currency concerns, China’s economic and political infrastructure are in need of a fundamental change. Corruption must be addressed, and the system made more transparent, in order to afford investors and fund managers a clearer view by which to assess the political risks of the currency.
...Download file to see next pages Read More
Share:
Tags
Cite this document
(“Potential Role of The Yuan as the New Reserve Currency Essay”, n.d.)
Retrieved from https://studentshare.org/macro-microeconomics/1404929-potential-role-of-the-yuan-as-the-new-reserve-currency

(Potential Role of The Yuan As the New Reserve Currency Essay)
https://studentshare.org/macro-microeconomics/1404929-potential-role-of-the-yuan-as-the-new-reserve-currency.

“Potential Role of The Yuan As the New Reserve Currency Essay”, n.d. https://studentshare.org/macro-microeconomics/1404929-potential-role-of-the-yuan-as-the-new-reserve-currency.
Comments (0)
Click to create a comment or rate a document

As Brandon Gilvin states in Solving the Da Vinci Code Mystery, “It’s difficult to start a discussion on the creation of the bible from the Bible itself” (7). As the word of God is being questioned, it does us no good to turn to the Gnostic Gospels, the main sources of the claims of Mary Magdalene’s and Jesus’ marriage. In these texts, Mary Magdalene is the most mentioned person after...
11 Pages (2750 words) Essay

In order to better regard this topic, a brief history of the implementation of the current Canadian health care system must be discussed. Further, appropriate financial matters should be considered. For the purposes of this essay, laws, and policies applicable to Canadian health care will not be evaluated in detail. However, the Chaouilli case in Quebec will be acknowledged, so as to direct the focus of the essay toward to possibility of the developmental path for a privatized health care system in Canada. Issues concerning the waiting line which may have been expressed on other occasions will be considered as well. Their role in the advancement of the privatization of health care in Canada will be further evaluated.
The Cana...
12 Pages (3000 words) Assignment

Mark Pastin in his book, ‘The Hard Problems of Management: Gaining the Ethics Edge’, has attempted to summarize this by providing four principles that are necessary in order for an organization to be ethical. The organization must interact with all stakeholders with...
8 Pages (2000 words) Research Paper

Despite the fact that longitudinal studies have proven that human aggression is to some extent an unwavering trait, it is undeniable that the environment plays a big role in influence the aforementioned behavior (Slaby & Roedell, 1982). Our daily encounter with the environment is a form of socialization that is defined as the process of integrating within oneself a sense of connection to a larger social world by means of discovering, understanding and adopting the beliefs, values, and norms of culture of other people. To a certain extent, sociologists consider the mass media as a powerful socializing agent as its significance is not constrained to the content alone of the media messages. Instead, it affects how we learn a...
10 Pages (2500 words) Report

Touch screen interface systems are becoming more and more common in the UK and abroad. During a pilot experiment using touch screen information technology, the automotive manufacturer Lexus piloted an informatio...
10 Pages (2500 words) Report
sponsored ads
Save Your Time for More Important Things
Let us write or edit the essay on your topic "Potential Role of The Yuan as the New Reserve Currency" with a personal 20% discount.
GRAB THE BEST PAPER

Let us find you another Essay on topic Potential Role of The Yuan as the New Reserve Currency for FREE!