Comments (0)
Add to wishlistDelete from wishlist
Cite this document
Summary
This paper talks about the initiation and the current state of the Arab economic integration, focusing more specifically on the Gulf Cooperation Council countries-participants. The market environment in the countries and the strategies that the respective governments have put in place are analyzed…
Download full paperFile format: .doc, available for editing
HIDE THIS PAPERGRAB THE BEST PAPER91.4% of users find it useful 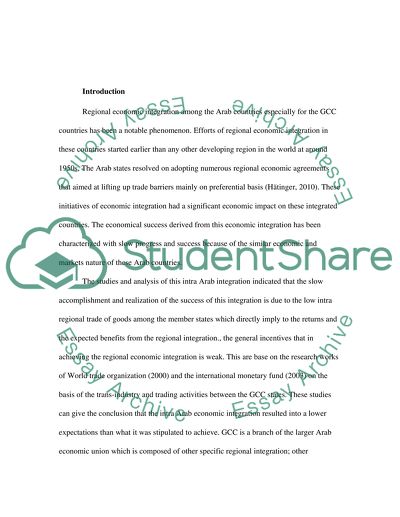 Download file to see previous pages All of these aimed at enhancing the economic development of its member states (Hakimian & Nugent, 2005). The Gulf cooperation council member states had a notable difference in regard to the economic growth and also difference in the gross domestic product per capital where Kuwait has the lowest figure of US$ 1000 compared to the United Arab Emirates which has over US$25000 (United Nations, 2009). With these disparities in the level of per capita income the Arab economic integration has to engage in an intra-industry trade and economic activities which is guided by the product differentiation. The reason of choosing this market driven by product differentiation is to gather and accommodate the existing income and GDP differences as well as preference. The major characteristic and influence that has been introduced by the Arab economic integration is the reduction and the elimination of the trade barriers that exist in between the member states, the reduction of the standard trade barriers include the non tariff barriers and the general costs of real trade (Hakimian & Nugent, 2005). The economic analysis and the evaluation of the Arab economic integration can be taken into account in two different dimensions where the first dimension is about the focus on the goods and services market, this dimension can be used to evaluate and assess the suitability and the desirability in regards as well as the context of the Arab integration. The second dimension comprises the reasoning in terms of the vicious circle; this provides that the idea of Arab economic integration has not been that effective because of the little intra regional trade due to the lack of organized...
This paper mainly focuses on initiation of the Arab economic integration, more specifically on the countries, which are active members of the Gulf Cooperation Council. It provides a clear description of the market environment in these countries and the strategies that the governments of the respective member states have put into place to enhance the efforts of integration. The paper further focuses on both the major challenges that limit the implementation process and the possible approaches that can be adopted, so as to achieve optimum economic integration among the GCC member states.
Regional economic integration among the Arab countries especially for the GCC countries has been a notable phenomenon. Efforts of regional economic integration in these countries started earlier than any other developing region in the world at around 1950s, The Arab states resolved on adopting numerous regional economic agreements that aimed at lifting up trade barriers mainly on preferential basis. These initiatives of economic integration had a significant economic impact on these integrated countries.
The studies and analysis of this Arab integration indicated that the slow accomplishment and realization of the integration is due to the low intra-regional trade of goods among the member states.
The key challenge in the pursuance of the economic integration by Arab countries is the efforts to establish a common market or a custom union. This has not been made possible due to its implementation nature where it requires agreement and harmonization of policies and regulations between the states. There is a need to establish institutional mechanisms, that will promote regional economic integration, in these counries.
...Download file to see next pagesRead More
Share:
Tags
Cite this document
(“Arab economic integration Research Paper Example | Topics and Well Written Essays - 4000 words”, n.d.)
Retrieved from https://studentshare.org/macro-microeconomics/1397857-arab-economic-integration

The effects of changes in the minimum wage are often tremendous and impact differently to the employers. This paper presents the resulting effects of an increase of minimum wage to employers in the American economy (Papps, Pg. 46).
The main intention of a minimum wage is that of boosting families with low income out of poverty. This concept has however been proved to be wrong because an increase in the wage has not changed the lives of the workers. It has served however to enable them to increase their purchasing power and adjust to their unresolved needs and not to alleviate them from poverty. Unfortunately, apart from all these good intentions, there are several adverse effects that have been associated with the imposition...
6 Pages(1500 words)Case Study
sponsored ads
Save Your Time for More Important Things
Let us write or edit the research paper on your topic "Arab economic integration" with a personal 20% discount.
GRAB THE BEST PAPER

Let us find you another Research Paper on topic Arab economic integration for FREE!