Asian economic crisis: the initial stages of the crisis and the major causes of it - Essay Example

Comments (0)
Add to wishlist Delete from wishlist
Cite this document
Summary
This paper talks about the initial stages of the Asian Economic Crisis and analyzes the major causes of it. Several structural weaknesses in the economies of South East Asia are identified as the causes of the crisis. Active IMF’s intervention helped to stabilize the situation in the region…
Download full paper File format: .doc, available for editing
HIDE THIS PAPERGRAB THE BEST PAPER96.8% of users find it useful 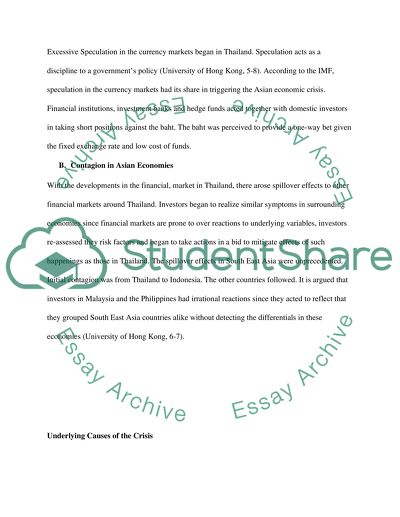 Extract of sample "Asian economic crisis: the initial stages of the crisis and the major causes of it"

(Asian Economic Crisis: The Initial Stages of the Crisis and the Major Essay)
https://studentshare.org/macro-microeconomics/1395633-asian-economic-crisis.

“Asian Economic Crisis: The Initial Stages of the Crisis and the Major Essay”, n.d. https://studentshare.org/macro-microeconomics/1395633-asian-economic-crisis.
Comments (0)
Click to create a comment or rate a document

CHECK THESE SAMPLES OF Asian economic crisis: the initial stages of the crisis and the major causes of it

As a result, American society is experiencing dramatic transformations (Skop & Li, 2005).
The Asian community in the United States is a cultural group that has assumed form since the passing of the 1965 immigration legislation. Even though Asians have been arriving in the United States since the middle of the 1980s, only in the previous four decades have the waves been remarkable. At some stage in that period, the U.S. Asian population has increased dramatically, and Asians one of today’s fastest-growing ethnic and racial minorities in the nation (ibid).
Asian immigration to and settlement in the United States is somewhat well recognized. Generally, Asian immigrants are geographically concentrated, with the imm...
7 Pages (1750 words) Assignment

The storms may be dust or the sand, hail and the thunder but they cause destruction and result in a total shutdown of business due to damage to the buildings.
Torrential rainfall can also add to an economic crisis and huge losses for rain also affects the buildings especially the acid rain (Wallace, Alfred Russel, 1889). This type of rain is corrosive in nature which results in deteriorating structures and a lot of costs are required for the maintenance (J. S. 0guntoyinbo and F. 0. Akintola, 1983). The acid rainfall causes the structure to degrade which results in increased requirements not only of cost but also increased manpower. Nowadays, we see such problems occur in places where the countries are very industrialize...
7 Pages (1750 words) Case Study
sponsored ads
Save Your Time for More Important Things
Let us write or edit the essay on your topic "Asian economic crisis: the initial stages of the crisis and the major causes of it" with a personal 20% discount.
GRAB THE BEST PAPER

Let us find you another Essay on topic Asian economic crisis: the initial stages of the crisis and the major causes of it for FREE!