US economy: OECD predictions about US economy - Essay Example

Comments (0)
Add to wishlistDelete from wishlist
Cite this document
Summary
US economy
It has experienced bankruptcies owing to increased risks in the investment sector and easy financing operations of the banks. Subprime loans led to the collapse of the financial institutions…
Download full paperFile format: .doc, available for editing
HIDE THIS PAPERGRAB THE BEST PAPER97.6% of users find it useful 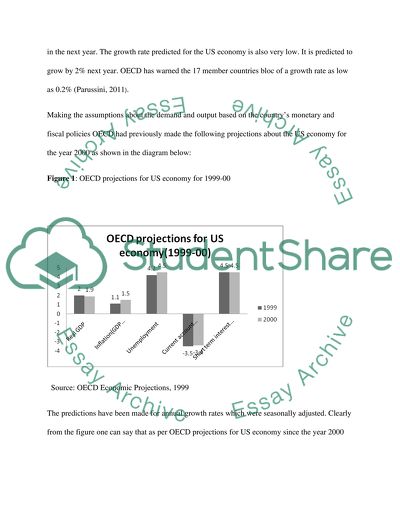 Extract of sample "US economy: OECD predictions about US economy"

Download file to see previous pages The curse of this financial crisis fails to die down and gives the country little scope for recovery. The country has recently been caught in a ‘debt trap’ as debt threatens to rise upto 101.1% of the country’s GDP. Rating agencies currently have rated the US economy much below its normal range.
Standard and Poor has already taken back the ‘AAA’ status it once assigned to the US economy. OECD predictions about US economy OECD has in recent times predicted more trouble for US economy. The country has already adopted fiscal tightening as counter policies in order to get rid of debts meaning the loans of the country. But this measure may not be a very suitable one as it threatens to take the economy towards recession. It would be very difficult for the country to recover if it gets into recession. Even monetary policies can do little to help out (Padaon, 2011).
The country is already experiencing an economic slowdown and such phenomenon is affecting its trade. OECD has predicted low trade growth of 6.7% in the current year. It is expected to decline further to 4.8% in the next year. The growth rate predicted for the US economy is also very low. It is predicted to grow by 2% next year. OECD has warned the 17 member countries bloc of a growth rate as low as 0.2% (Parussini, 2011). Making the assumptions about the demand and output based on the country’s monetary and fiscal policies OECD had previously made the following projections about the US economy for the year 2000 as shown in the diagram below: Figure 1: OECD projections for US economy for 1999-00 Source: OECD Economic Projections, 1999 The predictions have been made for annual growth rates which were seasonally adjusted. Clearly from the figure one can say that as per OECD projections for US economy since the year 2000 the economy of the country was showing an overall downward trend with real GDP growth falling out and unemployment increasing. Unemployment would continue to remain high in US as per OECD predictions. It is expected to stay around 8 % in the next two years. Fiscal measures adopted in United States needs to have credibility so as to overcome the sovereign debt crisis. Signs of improvement mostly depend on the effective policy implications of United States (Padaon, 2011). OECD has already confirmed that euro zone has fallen into recession and also proposed for an urgent requirement of decisive policies to prevent major economic disruptions. Strong measures consisting of sufficient increases in the European Financial Stability Fund are required to enlarge the economy’s capacity and overcome the euro crisis. To plan an effective bailout package there needs to be considerable utilization of the balance sheets of ECB (Parussini, 2011). Since Euro zone forms the key to world economy, disruptions in euro zone is surely to affect world output. The world output is projected to grow by 2% next year. Euro area would likely plunge into a deeper mode of crisis with deduction of economic activities in United States. With constant failure of United States in tackling fiscal deficit (fiscal expenses greater than fiscal revenues), OECD is expecting worst situations in the near future. Schools of thought dealing with current economic problems The two schools of thought that may be thought of for dealing with the current US economic problems are Keynesian and Classical schools of thought. The economic ideas of these two can be utilized to recover the US economy from the current crisis situation or any other European nation under similar kind of situation. a) Significant deficit reduction for Greek and Irish governments Among the ...Download file to see next pagesRead More
Share:
Tags
Cite this document
(“US economy: OECD predictions about US economy Essay”, n.d.)
Retrieved from https://studentshare.org/macro-microeconomics/1393514-us-economy-oecd-predictions-about-us-economy

CHECK THESE SAMPLES OF US economy: OECD predictions about US economy

They are on trial and will be dealt with fairly. These laws ensure that no one, even if he or she has committed a crime is abused or punished cruelly.
Following the history of civilization like in china, we see the traces of systems for Criminal justice in order to provide safety for the citizens. Evolving through the years laws have been modified and changed to form the system that we know today.
From its start, the “U.S. criminal justice system” has advocated the idea of “checks and balances”. To avoid dictatorial rule, the people who founded this system in such a way that one person was not given control or authority completely to punish the criminals. The idea of assigning a ‘jury...
6 Pages(1500 words)Assignment
sponsored ads
Save Your Time for More Important Things
Let us write or edit the essay on your topic "US economy: OECD predictions about US economy" with a personal 20% discount.
GRAB THE BEST PAPER

Let us find you another Essay on topic US economy: OECD predictions about US economy for FREE!