Comments (0)
Add to wishlistDelete from wishlist
Cite this document
Summary
A political union is the highest level of an economic integration, and therefore the EU member states have resulted to a union that is one of the hardest unions to achieve in the world. Many countries consider domestic welfare over that of other countries, thereby creating stumbling blocks to the establishment of a community like the EU…
Download full paperFile format: .doc, available for editing
HIDE THIS PAPERGRAB THE BEST PAPER98.5% of users find it useful 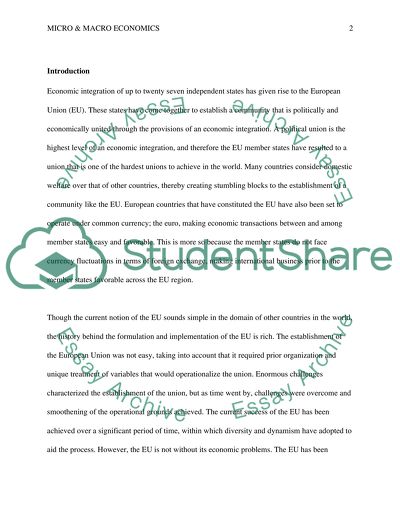 Download file to see previous pages European countries that have constituted the EU have also been set to operate under common currency; the euro, making economic transactions between and among member states easy and favorable. This is more so because the member states do not face currency fluctuations in terms of foreign exchange, making international business prior to the member states favorable across the EU region.

Though the current notion of the EU sounds simple in the domain of other countries in the world, the history behind the formulation and implementation of the EU is rich. The establishment of the European Union was not easy, taking into account that it required prior organization and unique treatment of variables that would operationalize the union. Enormous challenges characterized the establishment of the union, but as time went by, challenges were overcome and smoothening of the operational grounds achieved. The current success of the EU has been achieved over a significant period of time, within which diversity and dynamism have adopted to aid the process. However, the EU is not without its economic problems. The EU has been characterized by micro and macroeconomics problems in its economic and financial context. These problems will be evaluated in this paper alongside the future of the EU, in the context of the euro, enlargement of the EU and the economic characteristics therein.
A Brief History of the EU
Efforts to unite the European countries began in the twentieth century after the Second World War. Significant success was first realized in the year 1949 when some European countries began the uniting process under the umbrella of Council of Europe. One year later, a community by the name European Coal and Steel improved their cooperation and established a treaty that brought together six nations (Roland, 2005, Ch. 3). These nations made up the founding states of the EU, and even today they are recognized for this role. In the 1950s, a more pressing need to have the European nations emerged. This was during the cold war at the time, which saw the Eastern side of Europe divided from the Western side. Protests that characterized the cold war contributed to this division, raising a concern about the unification of the European community. In order to unite the two sides, the Rome Treaty was signed in the year 1957, allowing for the creation of European community that was at the time called the European Economic Community (Roland, 2005, Ch. 3). With the establishment of the community, people, goods and services could be moved across borders in the entire European community. As time went, more and more countries requested membership, thereby making the community grow larger and larger each year. The growth and development of the community necessitated the presence of a single market among the member states. Provisions of law were enacted to aid this process. Eventually, in the year 1989, the Eastern side of Europe was united with the Western side when the boundary between the two sides was eliminated. Since then and over the years, the united European community has grown larger and stronger with the incorporation and integration of more member states. The Modern EU The years between 1990 and 2000 were characterized by free practices of the single market ...Download file to see next pagesRead More
Share:
Cite this document
(“EU crises from microeconomic point of view and future of EU Assignment”, n.d.)
Retrieved de https://studentshare.org/macro-microeconomics/1392880-eu-crises-from-microeconomic-point-of-view-and

(EU Crises from Microeconomic Point of View and Future of EU Assignment)
https://studentshare.org/macro-microeconomics/1392880-eu-crises-from-microeconomic-point-of-view-and.

“EU Crises from Microeconomic Point of View and Future of EU Assignment”, n.d. https://studentshare.org/macro-microeconomics/1392880-eu-crises-from-microeconomic-point-of-view-and.
Comments (0)
Click to create a comment or rate a document

With the evolution of humans and territories, new political setups or governance came into being with set rules and regulations, to rule cities, provinces or states and important countries. Most or some of those set rules and regulations to govern countries are brought out as a result of treaties. So, a treaty (an agreement officially signed by countries, international organizations, etc) allows certain actions and restricts certain other actions for the effective functioning of the countries. So, this paper will analyze whether Austria has abided by the Austrian State Treaty and its policy on neutrality while dealing with the conflict in Bosnia, and during its entry into the European Union and its aftermath.
In the post Seco...
6 Pages(1500 words)Term Paper

According to Ian Harris, Locke’s idea of justice simply suggests that the conformity between action & the rule of propriety should be understood in the sense of ‘a right to anything’ (Harris, 2000, p. 49). That means human rights must be restored in society, and when it comes to property, it can be examined in context with ‘abundance’. The more abundant is the property, the more usage of it can be met. However, the ‘abundance’ factor cannot be fulfilled in today’s economic conditions. Chapter V of the Second Treatise defines ‘property’ as land according to Locke and can be examined in two different ways. First, that land, property or external objects that are owned by...
7 Pages(1750 words)Term Paper

Touch screen interface systems are becoming more and more common in the UK and abroad. During a pilot experiment using touch screen information technology, the automotive manufacturer Lexus piloted an informatio...
10 Pages(2500 words)Report
sponsored ads
Save Your Time for More Important Things
Let us write or edit the assignment on your topic "EU crises from microeconomic point of view and future of EU" with a personal 20% discount.
GRAB THE BEST PAPER

Let us find you another Assignment on topic EU crises from microeconomic point of view and future of EU for FREE!