Comments (0)
Add to wishlistDelete from wishlist
Cite this document
Summary
Australia is one of the many countries that were hit by the just recent global recession that hit the world. In many of the countries, they are still in the process of recovering because their banks and governments took time to work on tit and, therefore, had devastating effects on them. …
Download full paperFile format: .doc, available for editing
HIDE THIS PAPERGRAB THE BEST PAPER91% of users find it useful 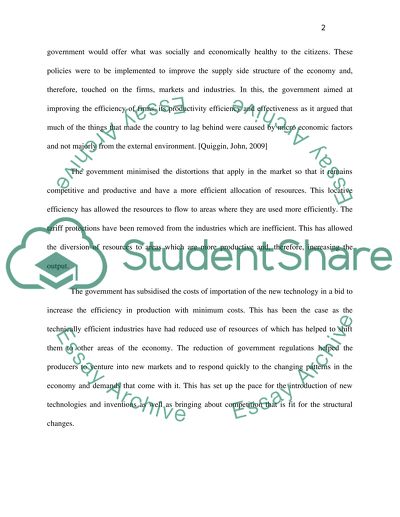 Extract of sample "ECONOMICS FOR BUSINESS"

Download file to see previous pages While these were being implemented, their application had to be prioritised so that the government would offer what was socially and economically healthy to the citizens. These policies were to be implemented to improve the supply side structure of the economy and, therefore, touched on the firms, markets and industries. In this, the government aimed at improving the efficiency of firms, its productivity efficiency and effectiveness as it argued that much of the things that made the country to lag behind were caused by micro economic factors and not majorly from the external environment.
The government minimised the distortions that apply in the market so that it remains competitive and productive and have a more efficient allocation of resources. This locative efficiency has allowed the resources to flow to areas where they are used more efficiently. The tariff protections have been removed from the industries which are inefficient. This has allowed the diversion of resources to areas which are more productive and, therefore, increasing the output.
The government has subsidised the costs of importation of the new technology in a bid to increase the efficiency in production with minimum costs. This has been the case as the technically efficient industries have had reduced use of resources of which has helped to shift them to other areas of the economy. The reduction of government regulations helped the producers to venture into new markets and to respond quickly to the changing patterns in the economy and demands that come with it. This has set up the pace for the introduction of new technologies and inventions as well as bringing about competition that is fit for the structural changes.
The government adopted the trade practices act that is meant to reduce competition through the collusive prices. This has also enabled new firms to enter the market and compete with the already existing firms. The government has removed the rigid regulations which used to control the market movements and has left the flow of the market been regulated by the demand and supply forces. The deregulations included the floatation of the dollar plus the removal of the control of RBA on the banks. These deregulations extended to the transport and telecommunication industries. This led to greater efficiency and productivity in these sectors, which was reflected in the whole economy. These were highlighted in the national economic reform policy which dated back to 1995. The government set up policies to ensure corporatisation and privatisation. This has brought about structural changes in the government business enterprises and has, therefore, ended up working independently from the government eradicating political interference in their working. Industries like Qantas and Telstra have been privatised to be more competitive. The government carried out reforms in the labour market, where there arose a ...Download file to see next pagesRead More
Share:
Tags
Cite this document
(“ECONOMICS FOR BUSINESS Coursework Example | Topics and Well Written Essays - 2500 words”, n.d.)
Retrieved de https://studentshare.org/macro-microeconomics/1392365-economics-for-business

CHECK THESE SAMPLES OF ECONOMICS FOR BUSINESS

On the other hand, these globalization standards are opposed by some critics and argue that globalization does not have to be a requirement for putting up a business in other countries, thus it is just a choice for entering a foreign market. Accordingly, standardization is applicable specifically to high-end markets and with accord to the market segmentation such as the trends that the young people patronize (Mullman, 2006) Regardless of the idea that globalization is mostly based on how the company standardizes the products, the home country still holds the profitability of the business as the economy affects how the foreign investors and other national sources back up the business (Stiglitz, 2006).
Making the world flat mak...
9 Pages(2250 words)Assignment
sponsored ads
Save Your Time for More Important Things
Let us write or edit the coursework on your topic "ECONOMICS FOR BUSINESS" with a personal 20% discount.
GRAB THE BEST PAPER

Let us find you another Coursework on topic ECONOMICS FOR BUSINESS for FREE!