The Importance of Coffee in the Brazilian Economy - Essay Example

Comments (0)
Add to wishlist Delete from wishlist
Cite this document
Summary
This paper talks about the importance of coffee production in the economy of Brazil. Coffee is a key ingredient of the economy of the country on three main counts – a key economic activity contributing to the GDP, a major export item, and an important industry for employment…
Download full paper File format: .doc, available for editing
HIDE THIS PAPERGRAB THE BEST PAPER95.3% of users find it useful 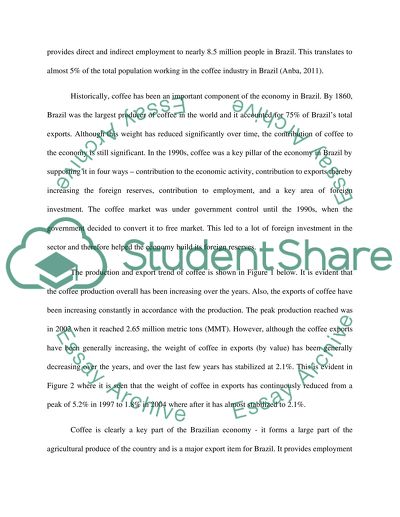 Extract of sample "The Importance of Coffee in the Brazilian Economy"

Download file to see previous pages This paper demonstrates the importance of coffee production in the economy of Brazil. There is two figures in the essay which graphically illustrates the production of coffee over the recent years.
Brazil is not only the largest producer of coffee and produces an estimated one third of world’s total coffee produce, and is also the world’s second largest consumer of coffee behind USA.
Coffee is a key ingredient of the economy of the country on three main counts – a key economic activity contributing to the GDP, a major export item, and an important industry for employment.
Agriculture accounts for 36% of Brazil’s exports, with coffee being the biggest exported agricultural item at $4.7 billion, by value. Coffee contributes to 0.27% of the total economy in Brazil and 2.1% of total exports.
Brazil has 2.1 million hectares of land under coffee cultivation (ICO) with an estimated 350,000 producers spread through 14 states, and 160 firms exporting coffee. The production and processing of coffee is highly labor intensive industry and the coffee industry provides direct and indirect employment to nearly 8.5 million people in Brazil. This translates to almost 5% of the total population working in the coffee industry in Brazil.
Historically, coffee has been an important component of the economy in Brazil. Brazil was the largest producer of coffee in the world and it accounted for 75% of Brazil’s total exports. Although this weight has reduced significantly over time, the contribution of coffee to the economy is still significant.
In the 1990s, coffee was a key pillar of the economy in Brazil by supporting it in four ways – contribution to the economic activity, contribution to exports thereby increasing the foreign reserves, contribution to employment, and a key area of foreign investment. The coffee market was under government control until the 1990s, when the government decided to convert it to free market. This led to a lot of foreign investment in the sector and therefore helped the economy build its foreign reserves. The production and export trend of coffee is shown in Figure 1 below. It is evident that the coffee production overall has been increasing over the years. Also, the exports of coffee have been increasing constantly in accordance with the production. The peak production reached was in 2002 when it reached 2.65 million metric tons (MMT). However, although the coffee exports have been generally increasing, the weight of coffee in exports (by value) has been generally decreasing over the years, and over the last few years has stabilized at 2.1%. This is evident in Figure 2 where it is seen that the weight of coffee in exports has continuously reduced from a peak of 5.2% in 1997 to 1.8% in 2004 where after it has almost stabilized to 2.1%. Coffee is clearly a key part of the Brazilian economy - it forms a large part of the agricultural produce of the country and is a major export item for Brazil. It provides employment to nearly 5% of the Brazilian population and has historically been an important driver for foreign investments. Over the years, its relative weight in exports has been decreasing indicating that the dependence of the Brazilian economy on coffee is decreasing slowly; however, coffee still continues ...Download file to see next pages Read More
Share:
Cite this document
(“The Importance of Coffee in the Brazilian Economy Essay”, n.d.)
Retrieved de https://studentshare.org/macro-microeconomics/1391283-the-importance-of-coffee-in-the-brazilian-economy

(The Importance of Coffee in the Brazilian Economy Essay)
https://studentshare.org/macro-microeconomics/1391283-the-importance-of-coffee-in-the-brazilian-economy.

“The Importance of Coffee in the Brazilian Economy Essay”, n.d. https://studentshare.org/macro-microeconomics/1391283-the-importance-of-coffee-in-the-brazilian-economy.
Comments (0)
Click to create a comment or rate a document

The research should be considered as the basis (from a theory and practice perspective) of immunology as it is known today. During the years that followed the above studies, immunology was developed furthermore and many theories were stated while the methods of treatment were differentiated in order to respond to the changing living standards and styles of life. The main reason for the choice of the particular topic has been its importance for patients that suffer from one of the types of the particular disease. In fact, a study published in the Environmental Health Perspective (2003, 483) proved that “autoimmune diseases are chronic, potentially life-threatening conditions; there are more than 80 recognized autoimmune disea...
10 Pages (2500 words) Case Study

The Importance of the 1957 Rome Treaty

Because the European Union became real after the Treaty of Rome was signed, the specific Treaty is regarded as having fundamental importance for the development of all the countries that participate in the European Union. From another point of view, Fischer (2000, 37) noticed that “EU is a legitimate customs union, with minimal internal barriers and a common external tariff; it is not uncommon for it to use standards or subsidies to protect or aid its own products and to exclude foreign products’. In other words, the main characteristic of the European Union is its integrity which can be translated as a common effort for financial, technological, legal and social development. Of course, there are cases where the power...
10 Pages (2500 words) Assignment

The most prominent characteristic of the capitalist economy is the control of few people on a large amount of Capital. These people...

In this connection, Beverly J. Davis (2007), an associate professor at the College of Technology in Lafayette and Kokomo says of Starbucks "The founder expanded his Seattle coffee shop into a huge enterprise and made it appealing to the average American. He was able to recognize that cafés were a strong trend in Europe and was able to pick up on the weak signal that Americans, despite their fast-paced lifestyle, were eager to embrace the idea of slowing down enough to visit a coffee shop, bookstore or library to connect with other people ” Davis further says in order for a fad to become a trend, it must appeal to the mainstream, be accessible to all, be easily understandable to the average person, be easy to obtain an...
10 Pages (2500 words) Case Study

1), “The subject of business ethics is one that has a long history of debate in business, academic, and public circles. Views vary on the extent of ethical responsibility that businesses should exercise. The minimalist position, long espoused by Milton Friedman, holds that the only ethical responsibility a business has is to make a profit within the confines of the law. In a free-market society, this single-minded pursuit of profit-making is ultimately in the best interest of society because market forces will maximize the economic well-being of societys members. Furthermore, Friedman argues that corporations are legal, not moral entities, and hence have no ethical obligations.”
However, most people would disagree...
6 Pages (1500 words) Essay

Empowerment is the authority to make decisions within one’s area of operation without having to get approval; from anyone else. Here the operatives are encouraged to use their initiative to do things the way they like. To this end, the employees are given not just authority but resources as well so that they not only take decisions but implement them quickly. This empowerment means giving the employees the authority to make decisions and providing them with financial resources to implement these decisions (Koch & Godden, 1997 11).
Employee participation and empowerment participation means sharing the decision making power with the lower ranks of an organization in an appropriate manner (Lashley & McGoldrick, 199...
9 Pages (2250 words) Assignment
sponsored ads
Save Your Time for More Important Things
Let us write or edit the essay on your topic "The Importance of Coffee in the Brazilian Economy" with a personal 20% discount.
GRAB THE BEST PAPER

Let us find you another Essay on topic The Importance of Coffee in the Brazilian Economy for FREE!