Is Eurozone sustainable for the UK to join - Literature review Example

Comments (0)
Add to wishlistDelete from wishlist
Cite this document
Summary
The Eurozone or the euro area can be defined as the union of countries in Europe who have decided to adopt the euro as their as a common and only currency. This economic and monetary union currently has seventeen member countries. There are 10 other countries in the European Union that have not yet become members of the Eurozone…
Download full paperFile format: .doc, available for editing
HIDE THIS PAPERGRAB THE BEST PAPER98% of users find it useful 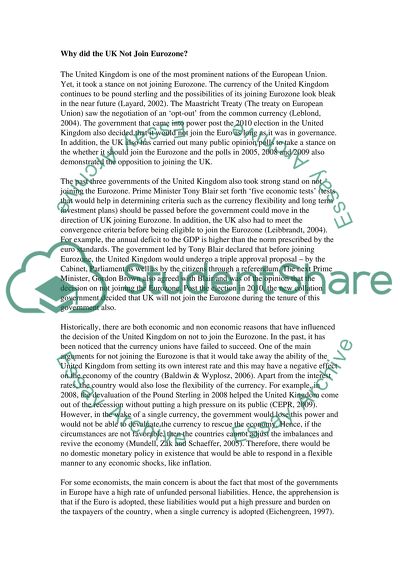 Extract of sample "Is Eurozone sustainable for the UK to join"

Download file to see previous pages Over the past few years, there has been a considerable debate about the stand that the United Kingdom has taken towards Eurozone. This study explores the topic, ‘Is Eurozone sustainable for the UK to join’. By taking a detailed look at the reasons because of which UK did not join and the reasons due to which the other countries joined, this study would try to analyze the perspective of the UK with regards to Eurozone.

A Brief History of Eurozone

For many decades, European leaders and diplomats have discussed and debated the concept of a monetary integration of European countries. The arguments were multiple, while some thought that the common currency could prove to be an alternative to the US dollar, some other felt that a single currency would provide many different advantages (Zimmerman, 1995). For some leaders, it meant political symbolism and for some others, it meant the rise a new and improved economic model (Vujic, 2004). After a long era of discussions and debates, the Eurozone came into existence in1999 and the Euro became the legal currency for the member nations (Kleimeier and Sander, 2002).

The adoption of a single currency would mean that all the member countries would have a single monetary policy, and would not continue to have separate policies. To regulate this, the European Central Bank came into existence which lays down the Europe wide monetary policies and handles decisions related to interest rates, exchange rates and so on. (Salvatore, 2002). Therefore, if any particular country wants to introduce a separate economy policy, it has to rely on the policies of the European Central Bank as it has become the sole authority of Eurozone. Having a single currency has both advantages and disadvantages and the existence of the Eurozone over the ten years has proved this. The Euro has seen success during the period of 2003-2005, where as it suffered from the loss of its stand during the economic recession that happened during 2008-2009. In recent times, there have been some apprehensions about the stability of the Euro, in the light of the results of the recession where some members of the Eurozone saw major economic crises. Why did the UK Not Join Eurozone? The United Kingdom is one of the most prominent nations of the European Union. Yet, it took a stance on not joining Eurozone. The currency of the United Kingdom continues to be pound sterling and the possibilities of its joining Eurozone look bleak in the near future (Layard, 2002). The Maastricht Treaty (The treaty on European Union) saw the negotiation of an ‘opt-out’ from the common currency (Leblond, 2004). The government that came into power post the 2010 election in the United Kingdom also decided that it would not join the Euro as long as it was in governance. In addition, the UK also has carried out many public opinion polls to take a stance on the whether it should join the Eurozone and the polls in 2005, 2008 and 2009 also demonstrated the opposition to joining the UK. The past three governments of the United Kingdom also took strong stand on not joining the Eurozone. Prime Minister Tony Blair set forth ‘five economic tests’ (tests that would help in determining criteria such as the currency ...Download file to see next pagesRead More
Share:
Tags
Cite this document
(“Is Eurozone sustainable for the UK to join Literature review”, n.d.)
Retrieved de https://studentshare.org/macro-microeconomics/1390436-is-eurozone-sustainable-for-the-uk-to-join

(Is Eurozone Sustainable for the UK to Join Literature Review)
https://studentshare.org/macro-microeconomics/1390436-is-eurozone-sustainable-for-the-uk-to-join.

“Is Eurozone Sustainable for the UK to Join Literature Review”, n.d. https://studentshare.org/macro-microeconomics/1390436-is-eurozone-sustainable-for-the-uk-to-join.
Comments (0)
Click to create a comment or rate a document

In this context, it should be mentioned that Schuler et al. (1998, 159) there are a few issues that need to be taken into consideration when formulating the human resource strategy of a particular organizational environment: ‘a) the business structure, b) the legislative and employment relationship context, c) the patterns of HRM competence and decision-making and d) the national culture’. The above views are supported by Gooderham et al. (1999, 507) who stated that ‘despite their very different assumptions, both rational and institutional explanations of organizational structure and management practices predict similarity among firms that operate in the same industry within the context of a simple country’...
9 Pages(2250 words)Assignment

The housing industry is divided into residential, commercial and industrial segments. Economists define supply in terms of service units, that is, a physical unit can be deconstructed into the services that it helps provide. These housing unit services are considered as an unobservable theoretical construct. Housing stock depreciates making it qualitatively different from a brand new constructed building.
The owner, user/owner and renter comprise the demand side of the housing market while the renovators and developers comprise the supply side of the market. In order to implement the simple demand and supply analysis to the housing markets, several modifications have to be made to the standard microeconomic procedures and ass...
8 Pages(2000 words)Research Paper
sponsored ads
Save Your Time for More Important Things
Let us write or edit the literature review on your topic "Is Eurozone sustainable for the UK to join" with a personal 20% discount.
GRAB THE BEST PAPER

Let us find you another Literature review on topic Is Eurozone sustainable for the UK to join for FREE!