Comments (0)
Add to wishlistDelete from wishlist
Cite this document
Summary
The paper describes the poem Problems with Hurricanes by Victor Hernandes Cruz. It is a literary work of pure quality and revolves around how humans ought to die. It shows that there are ways that individuals can be appreciated through their deaths…
Download free paperFile format: .doc, available for editing
HIDE THIS PAPERGRAB THE BEST PAPER91.1% of users find it useful 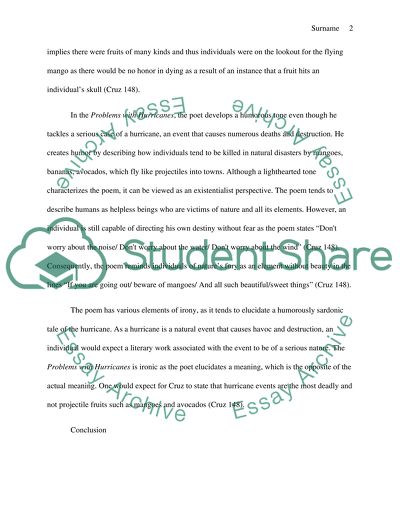 ﻿Introduction
Problems with Hurricanes by Victor Hernandes Cruz relies on humorous fiction to elucidate a comic impact on the readers, as well as an amalgamation of reality and fiction in an effective way. The utilization of fantasy enables Cruz’s imagination with freedom and thus the realm of reality does not dictate his views and events and thus impossible becomes actuality. The poem revolves around events of a hurricane and the manner in which individuals are more afraid of the falling fruits than natural disasters.
Discussion
The poet states that a death caused by drowning brings honor rather than passing away as a result of a mango smashing one’s head. By these words, Cruz argues that death by natural causes makes people to feel pity and heartbroken and in a way, it brings respect and admiration as opposed to death by ways other than natural whereby people tend to feel sorry but cannot help themselves but laugh at the deceased. This is the literary work’s main idea, whereby the poet emphasizes that when an individual dies, he/she should pass away with honor. An example of such a death is dying in natural disasters like a Hurricane. In a sense, Cruz manages to connect the poem to his culture as he grew up in Puerto Rico where he probably experienced numerous Hurricane events. Spending his life in Puerto Rico, a region characterized by tropical climate implies there were fruits of many kinds and thus individuals were on the lookout for the flying mango as there would be no honor in dying as a result of an instance that a fruit hits an individual’s skull (Cruz 148).
In the Problems with Hurricanes, the poet develops a humorous tone even though he tackles a serious case of a hurricane, an event that causes numerous deaths and destruction. He creates humor by describing how individuals tend to be killed in natural disasters by mangoes, bananas, avocados, which fly like projectiles into towns. Although a lighthearted tone characterizes the poem, it can be viewed as an existentialist perspective. The poem tends to describe humans as helpless beings who are victims of nature and all its elements. However, an individual is still capable of directing his own destiny without fear as the poem states “Don't worry about the noise/ Don't worry about the water/ Don't worry about the wind” (Cruz 148). Consequently, the poem reminds individuals of nature’s fury as an element without beauty in the lines “If you are going out/ beware of mangoes/ And all such beautiful/sweet things” (Cruz 148).
The poem has various elements of irony, as it tends to elucidate a humorously sardonic tale of the hurricane. As a hurricane is a natural event that causes havoc and destruction, an individual would expect a literary work associated with the event to be of a serious nature. The Problems with Hurricanes is ironic as the poet elucidates a meaning, which is the opposite of the actual meaning. One would expect for Cruz to state that hurricane events are the most deadly and not projectile fruits such as mangoes and avocados (Cruz 148).
Conclusion
The poem is a literary work of pure quality and revolves around how humans ought to die. It shows that there are ways that individuals can be appreciated through their deaths. Even though the humor characterizes the poem, Cruz’s comic eventually slows down by offering advice to societies that humans should quit complaining about the God’s act as communities always endure hard times
Work Cited
Cruz, Victor H. Maraca: New & Selected Poems, 1966-2000. Minneapolis, MN: Coffee House Press, 2001. Print. Read More
Share:
Tags
Cite this document
(“The Events of a Hurricane and the Manner in the Poem Problems with Research Paper”, n.d.)
The Events of a Hurricane and the Manner in the Poem Problems with Research Paper. Retrieved from https://studentshare.org/literature/1669778-poetry-review-essay

“The Events of a Hurricane and the Manner in the Poem Problems With Research Paper”, n.d. https://studentshare.org/literature/1669778-poetry-review-essay.
Comments (0)
Click to create a comment or rate a document

...?Celia Cruz Celia Cruz was born on October 21, 1924 in Havana, Cuba to Simon Cruz and Catalina Alfonso. Celia was the second child out of fourteen. Growing up, Celia was surrounded by Cuba’s diverse musical realm, and many of the musicians that she listened to as a child influenced her in her later years as a musician herself. During this time, Celia became fond of the religious Yoruba music, studying the words and even creating some of her own recordings in the same style. As a teenager, Celia aunt helped to encourage Celia’s love of music, taking her to cabarets to sing, but Celia’s father had other plans. He wanted his daughter to remain in school and study to become a teacher; one of...
2 Pages(500 words)Article

...?Hurricanes Introduction Hurricanes are one of the major disasters that can kill thousands of people in an instant. It is one of the most ferocious and devastating natural phenomena.Hurricane is part of family of storms called tropical cyclone.Tropical disturbances such as clusters of thunderstorms accelerate the process by generating a column of rising air in the zone of low pressure. Pushed by the trade winds, the disturbance becomes a spinning mass of thunderclouds growing as warm moist air sweeps in below the low pressure void. Due to the earth’s Coriolis Effect, the cloud mass always rotates counterclockwise in the northern hemisphere. As wind speed exceeds 74 miles per hour a...
7 Pages(1750 words)Research Paper

...? Hurricanes 8th April Introduction Hurricanes are extremely devastating because of their capability to destroy billions’ worth of property and to kill very many people evidenced by the property and life lost during the recent hurricane Katrina. There are different types of tropical cyclones; for example, we have winter storms which are the largest cyclones and tornadoes which are the strongest; however, hurricanes are neither the strongest nor the largest cyclones, but their size combined with their strength makes them the most powerful tropical cyclones on the earth. General Overview: Structure and Categories of Hurricanes Tropical cyclone are...
3 Pages(750 words)Book Report/Review

...College: Celia Cruz Celia Cruz is well known all over the world because of her exceptional performances as well as the messages of joy she spread all over the world. Cruz is an artist that has surpassed the legend of time. This is shown by her success as an artist with over six decades in the music industry. This made her to be an icon and inspiration to the whole world and especially to the Latin community. She was identified as the “Queen of Salsa,” and remains to be a significant person in the Cuban music history. It is evident that her vocal talent cannot be matched to anybody else in the world and her highly structured performances influenced numerous individuals and countries. She...
7 Pages(1750 words)Essay

...Hurricanes Hurricanes are generated when the radiation of the sun heats tropical waters causing air to rise as it grows warmer. The heat enables the air or the water vapour to rise with great speed then initiates to rotate counter-clockwise in twelve hours at which time span the formation of winds may be expected to take place with greater strength and rate of whirling motion. Such movement may be classified as forming a light breeze with winds at slow pace, fresh breeze if slightly faster, and a high wind beyond this rate. As a result, when the moist warm air at the ocean surface evolves to meet the cooler land air, a 74-mph tropical storm known as the hurricane may come into being. The...
1 Pages(250 words)Essay

The Balance of Payments and Borrowing Constraints

...Yunia Gonzalez-Rubio Dr.Mitchell MUL 2380 November 14, Celia Cruz Celia Cruz, a popular salsa dancer who earned twenty-three gold albums, was born in October 21, 1925, in the city of Havana. She received an award of the National Medal of Arts. Cruz was a Cuban singer who was celebrated internationally for many years as the Queen of Salsa Music. During her performances, she thrilled her audience with her soulful voice and rhythmically compelling style on stage. Cruz grew up in the district of Havana, in an extended family of fourteen. Together with her father Simon who worked as a railway stroker, Cruz resided in Havana. She also lived together with her...
4 Pages(1000 words)Research Paper

The Horrible Gift of Freedom

...HURRICANES Nova Southeastern College of Health Care Sciences Department of Health Science DHS Number Title Assignment Week Number Date HURRICANES Introduction A hurricane is a category of tropical whirlwind or unembellished tropical rainstorm that customs in the southern Atlantic Ocean, Gulf of Mexico, Caribbean Sea and in the eastern pacific ocean (Roger & Roger, 2007). It is habitually complemented by thunderstorms as well as a movement of blustery weather adjacent the seeming of the earth in an anticlockwise fashion (Heitmuller & Perez, 2005). The ensuing discussion is going to focus on the environmental impacts of a hurricane, the public health concerns that may result from the evacuation of a hospital during a hurricane... and the...
6 Pages(1500 words)Research Paper
sponsored ads
Save Your Time for More Important Things
Let us write or edit the research paper on your topic "The Events of a Hurricane and the Manner in the Poem Problems with Hurricanes by Victor Hernandes Cruz" with a personal 20% discount.
GRAB THE BEST PAPER

Let us find you another Research Paper on topic The Events of a Hurricane and the Manner in the Poem Problems with Hurricanes by Victor Hernandes Cruz for FREE!