Comments (0)
Add to wishlistDelete from wishlist
Cite this document
Summary
The paper "George Orwell’s Homage to Catalonia" describes that book serves as a reminder that twentieth-century European history is a matter of peasant involvement in politics; passion and belief in a cause is the motivation behind Orwell joining up, and the motivation of many others…
Download full paperFile format: .doc, available for editing
HIDE THIS PAPERGRAB THE BEST PAPER91.5% of users find it useful 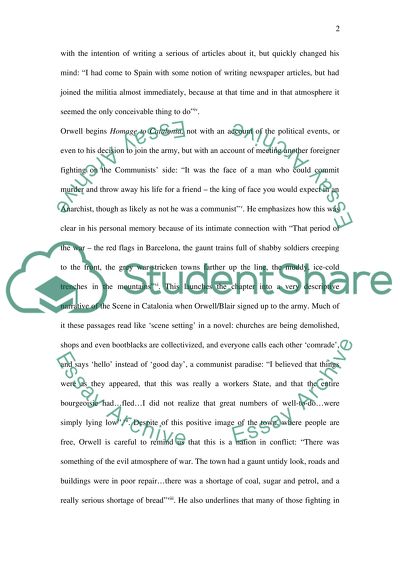 Download file to see previous pages I could not help thinking that it would be even luckier not to be shot at all" i. These revelations remained with Blair for the rest of his life.
These are the origins of Homage to Catalonia, and a later article called "Looking back on the Spanish War", in which a clear description of Orwell's "Here, we are, soldiers of a revolutionary army, defending Democracy against Fascism, fighting a war which is about something, and the detail of our lives is just as sordid and degrading as it could be in prison" ii. He also felt that he needed to write a story which told the tale of the war from the perspective of a soldier, not a journalist: "Throughout the fighting, I never made the correct 'analysis' of the situation that was so glibly made by journalists hundreds of miles away." iii. Orwell clearly despises this kind of journalism which distanced itself from the events. In fact, he had gone to Catalonia with the intention of writing a serious of articles about it, but quickly changed his mind: "I had come to Spain with some notion of writing newspaper articles, but had joined the militia almost immediately because at that time and in that atmosphere it seemed the only conceivable thing to do"iv.
Or
Orwell begins Homage to Catalonia, not with an account of the political events, or even to his decision to join the army, but with an account of meeting another foreigner fighting on the Communists' side: "It was the face of a man who could commit murder and throw away his life for a friend - the king of face you would expect in an Anarchist, though as likely as not he was a communist"v. He emphasizes how this was clear in his personal memory because of its intimate connection with "That period of the war - the red flags in Barcelona, the gaunt trains full of shabby soldiers creeping to the front, the grey war-stricken towns farther up the line, the muddy, ice-cold trenches in the mountains" vi. This launches the chapter into a very descriptive narrative of the Scene in Catalonia when Orwell/Blair signed up to the army. Much of it these passages read like 'scene-setting' in a novel: churches are being demolished, shops and even bootblacks are collectivized, and everyone calls each other 'comrade', and says 'hello' instead of 'good day', a communist paradise: "I believed that things were as they appeared, that this was really a worker State, and that the entire bourgeoisie had fled did not realize that great numbers of well-to-do were simply lying low".vii. Despite this positive image of the town, where people are free, Orwell is careful to remind us that this is a nation in conflict: "There was something of the evil atmosphere of war. The town had a gaunt untidy look, roads and buildings were in poor repair there was a shortage of coal, sugar and petrol, and a really serious shortage of bread"viii. He also underlines that many of those fighting in the war were civilian militias, poorly trained and idealistic, rather than like an army; even the clothes were unlike an organized army: "Everyone's clothes followed the same general plan, but they were never quite the same in any two cases" ix. ...Download file to see next pagesRead More
Share:
Tags
Cite this document
(Review of George Orwells Homage to Catalonia Literature, n.d.)
Review of George Orwells Homage to Catalonia Literature. https://studentshare.org/literature/1505361-review-of-george-orwells-homage-to-catalonia
(Review of George Orwells Homage to Catalonia Literature)
Review of George Orwells Homage to Catalonia Literature. https://studentshare.org/literature/1505361-review-of-george-orwells-homage-to-catalonia.
“Review of George Orwells Homage to Catalonia Literature”. https://studentshare.org/literature/1505361-review-of-george-orwells-homage-to-catalonia.
Comments (0)
Click to create a comment or rate a document

CHECK THESE SAMPLES OF George Orwells Homage to Catalonia

Why Did George W. Bush Win the 2004 Presidential Election

The Time Machine by George Wells

Thomas Rowlands George B. McClellan and Civil War History: In the Shadow of Grant and Sherman

6 Pages(1500 words)Book Report/Review
sponsored ads
Save Your Time for More Important Things
Let us write or edit the literature review on your topic "George Orwells Homage to Catalonia" with a personal 20% discount.
GRAB THE BEST PAPER

Let us find you another Literature review on topic George Orwells Homage to Catalonia for FREE!