Comments (0)
Add to wishlistDelete from wishlist
Cite this document
Summary
This paper “Proverbial Features of Chinua Achebe’s Things Fall Apart” looks at Chinua Achebe’s use of proverbs in “Things Fall Apart” as a dominant functional feature rather than a stylistic one. The use of proverbs in oral and written stories reflects the universal lessons collected by the humans. …
Download full paperFile format: .doc, available for editing
HIDE THIS PAPERGRAB THE BEST PAPER92.6% of users find it useful 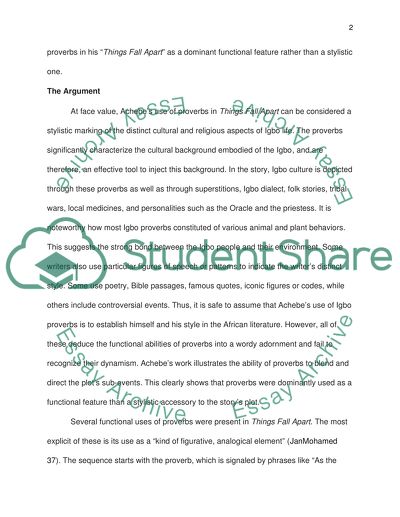 Download file to see previous pages It is noteworthy how most Igbo proverbs constituted of various animal and plant behaviors. This suggests the strong bond between the Igbo people and their environment. Some writers also use particular figures of speech or patterns to indicate the writer’s distinct style. Some use poetry, Bible passages, famous quotes, iconic figures or codes, while others include controversial events. Thus, it is safe to assume that Achebe’s use of Igbo proverbs is to establish himself and his style in the African literature. However, all of these deduce the functional abilities of proverbs into a wordy adornment and fail to recognize their dynamism. Achebe’s work illustrates the ability of proverbs to blend and direct the plot’s sub-events. This clearly shows that proverbs were dominantly used as a functional feature than a stylistic accessory to the story’s plot.
Several functional uses of proverbs were present in Things Fall Apart. The most explicit of these is its use as a “kind of figurative, analogical element” (JanMohamed 37). The sequence starts with the proverb, which is signaled by phrases like “As the elders said,” then the narration prior to the mentioned proverb: “As the elders said, if a child washed his hands he could eat with kings. Okonkwo had clearly washed his hands and so he ate with kings and elders” (Achebe 5). In these excerpts, the Igbo proverb introduces the implicative event or transition in Okonkwo’s life. The proverb indicates a status change (e.g., from poor to a titled noble), which Okonkwo had undergone. The narration that followed after the proverb meant to clarify to whose character it applies. This proverb-narration sequence is deemed simpler; adding the characters in the proverbs may alter or confuse the proverbs’ meaning. This particular use of the proverb does not just provide the writer the freedom to lessen elaboration but also creates a deep mark, highlights, and emphasizes the implication of a less-detailed event.
Emenyonu indicated that this use of proverbs provides “ ...Download file to see next pagesRead More
Share:
Tags
Cite this document
(“Proverbial Features of Chinua Achebes Things Fall Apart Essay”, n.d.)
Retrieved from https://studentshare.org/literature/1440073-discuss-these-words-of-wisdom-as-a-feature-of-the

K wik-fit employs a strong workforce of 850 employees to execute this task. The case study reveals that the workforce is distinctly tiered into hierarchies of grass-root workers, supervisors and managers. The main employee and HRM context at K wik-fit are that of employee turnover. This context can best be classified as a problematic context as the employee turnover has been very rapid at K wik-fit. Figures reported in the case study indicate that in the K wik-fit’s Lanarkshire call centre the employee turnover used to be as high as 52 per cent. In the year 2001 such high employee turnovers used to translate into vacancy rate as high as 21 per cent. This used to present three-fold HRM problems. There was a colossal waste of...
10 Pages(2500 words)Assignment

...WHY YOU DO THE THINGS YOU DO BY: TIMOTHY CLINTON & GARY SIBCY AFFILIATION: Contents Contents 2 Summary 3 Concrete responses 6 Reflection 7 Application 8 References 9 Why You Do the Things You Do Summary The title of the book is “Why you do the things you do” and the authors of this book are Timothy Clinton and Gary Sibcy. The book had been designed and fashioned in a transformational style, so that the contents of the book are easy for the readers to apply and transform the changes need to be brought in their lives. There are four main relations discussed in this book that enlightens the readers to know more about these relation’s origin and how the actions that come in with each relation are imposed on the receiver being dealt...
6 Pages(1500 words)Book Report/Review

The Use of Surveying in Mapping Features within the Physical Landscape

...The Use of Surveying in Mapping Features within the Physical landscape Morphological Mapping Morphological mapping is the process of delineating different features in a landscape based on their surface form or morphology. The primary information needed for this method is topographic elevation. This may be derived from topographic maps or digital elevation models This method involves the mapping of point properties and/or specific landforms. Point properties include elevation, relief, slope, aspect, and curvature (Evans 1972). In the state of Michoacan, Mexico, relief and slope were used to classify the landscape into different landforms such as plains, piedmonts, plateaus, hills and sierras (Bocco et al. 2001). In the Oregon Coast Range...
6 Pages(1500 words)Term Paper

The Things They Carried: Jimmy Cross

Additionally, the Cold War between the United States and the USSR caused numerous conflicts in the most remote areas of the planet, such as Afghanistan and Vietnam. Consequently, wars were and remain a mundane reality for many people. Besides, it seems that wars are an inevitable part of human civilization connected to our deep subconscious animal instincts and some uncontrollable need for violence. What is undoubtful is that wars make people feel closer to death. During a peaceful life full of daily worries and troubles a human being tends to forget that he is mortal; however, while at war there is no time for irrelevant problems since any second one can be shot dead. So paradoxically wars teach people to value life and think of...
8 Pages(2000 words)Book Report/Review
sponsored ads
Save Your Time for More Important Things
Let us write or edit the essay on your topic "Proverbial Features of Chinua Achebes Things Fall Apart" with a personal 20% discount.
GRAB THE BEST PAPER

Let us find you another Essay on topic Proverbial Features of Chinua Achebes Things Fall Apart for FREE!