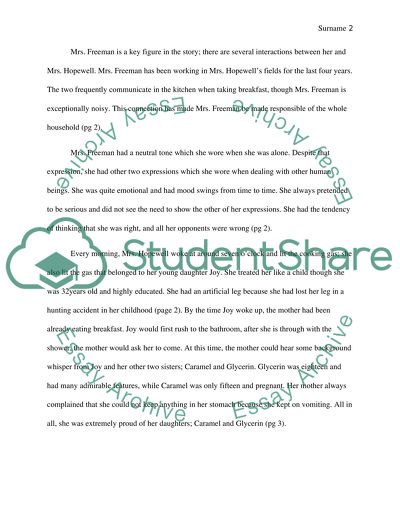 Download file to see previous pages The author has reflected her life and history in the themes developed in the story. The first reflection is based her philosophy; religion and environment, while the second reflection is based on her location; southern region of USA. The story is an ideal lesson to the elite. It emphasizes on respect, appreciation, and humility. Joy is the protagonist and thinks to be preferred from her academic achievements. Her prides lead to her lesson. Discussion Mrs. Freeman is a key figure in the story; there are several interactions between her and Mrs. Hopewell. Mrs. Freeman has been working in Mrs. Hopewell’s fields for the last four years. The two frequently communicate in the kitchen when taking breakfast, though Mrs. Freeman is exceptionally noisy. This connection has made Mrs. Freeman be made responsible of the whole household (pg 2). Mrs. Freeman had a neutral tone which she wore when she was alone. Despite that expression, she had other two expressions which she wore when dealing with other human beings. She was quite emotional and had mood swings from time to time. She always pretended to be serious and did not see the need to show the other of her expressions. She had the tendency of thinking that she was right, and all her opponents were wrong (pg 2). Every morning, Mrs. Hopewell woke at around seven o’clock and lit the cooking gas; she also lit the gas that belonged to her young daughter Joy. She treated her like a child though she was 32years old and highly educated. She had an artificial leg because she had lost her leg in a hunting accident in her childhood (page 2). By the time Joy woke up, the mother had been already eating breakfast. Joy would first rush to the bathroom, after she is through with the shower, the mother would ask her to come. At this time, the mother could hear some background whisper from Joy and her other two sisters; Caramel and Glycerin. Glycerin was eighteen and had many admirable features, while Caramel was only fifteen and pregnant. Her mother always complained that she could not keep anything in her stomach because she kept on vomiting. All in all, she was extremely proud of her daughters; Caramel and Glycerin (pg 3). Joy’s mother had many experiences; she had divorced her husband and did not have anyone to accompany her in the fields. There were many farmers working in their fields, and they needed some supervision, this was to ensure they finished their duties in time. Most of these farmers were women and thus extremely noisy. Mrs. Hopewell frequently asked Joy to accompany her in the field, and the response was quite hostile. She gave ugly remarks and changed her face. The mother would get annoyed and respond, “What kind of girl are you? I do not want to see you around here” (pg 3). With time, she excused the attitude because her daughter had a broken leg. This was because all through joys life, she took her as a child and did all that Joy wanted. From childhood, her name was Joy, but when she reached twenty years, she changed it legally to Hugla. Her mother was not happy about it because it was the ugliest name she ever thought of. The pain was severe especially when she remembered how beautiful her previous name was. She had changed her name to Hulga. It was related to battleship (pg 4). At first, Joy tolerated her mother because she saved her from walking in the fields, unlike the other two sisters. She also found it impossible acting rude to Mrs. Freeman. The name Hulga came from Mrs. ...Download file to see next pagesRead More
Share:
Tags
Cite this document
(“Country Good People Coursework Example | Topics and Well Written Essays - 1250 words”, n.d.)
Country Good People Coursework Example | Topics and Well Written Essays - 1250 words. Retrieved from https://studentshare.org/literature/1439474-good-country-people
(Country Good People Coursework Example | Topics and Well Written Essays - 1250 Words)
Country Good People Coursework Example | Topics and Well Written Essays - 1250 Words. https://studentshare.org/literature/1439474-good-country-people.
“Country Good People Coursework Example | Topics and Well Written Essays - 1250 Words”, n.d. https://studentshare.org/literature/1439474-good-country-people.
Comments (0)
Click to create a comment or rate a document

Since the year 2000, globalization has led many large business organizations to implement a long list of necessary changes in order to keep their business competitive within the global market. These changes may be influenced by both internal and external factors. (Burke, 2002)  Internal factors could be the introduction of a newly appointed general manager that came from a different company and cultural background or a change in organizational policy.  On the other hand, external factors may include new customers’ preferences in terms of products and services, a new direction with regards to where the market is heading, constantly changing the educational level of the potential manpower or the technological changes...
12 Pages(3000 words)Research Paper

OConnors Fiction and Debates on Good and Evil

This paper shall seek to engage with works of O’Connor’s fiction and related debates on good and evil. O’Connor argues that good and evil are relative states and while a person may not be good at a certain point of time, he or she may, through another lens, appear so.
One such instance is the character of Francis Tarwater from the novel The Violent Bear It Away. On the one hand, one may think of him as a despicable character who murders a differently-abled child who is related to him. This murder is also committed at the behest of a character named Vice who is almost always associated with the devil, who is the embodiment of evil in many narratives. The murder, however, also becomes a symbolic baptism as far...
6 Pages(1500 words)Literature review
sponsored ads
Save Your Time for More Important Things
Let us write or edit the coursework on your topic "Country Good People" with a personal 20% discount.
GRAB THE BEST PAPER

Let us find you another Coursework on topic Country Good People for FREE!