Comments (1)
Add to wishlistDelete from wishlist
Cite this document
Summary
This paper is aimed at providing a comparative study of the poet Sylvia Plath with Emily Bronte. The researcher of this essay aims to present the similarities and differences in the life and writings of these two renowned writers as reflected in their works…
Download full paperFile format: .doc, available for editing
HIDE THIS PAPERGRAB THE BEST PAPER98.4% of users find it useful 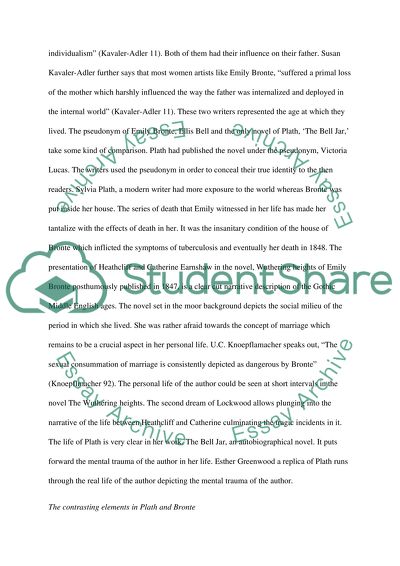 Download file to see previous pages This research will begin with the statement that Sylvia Plath has been proclaimed as one of the most read personalities of the 21st century through the unique presentation of the subjects which contributed to the popularity of the confessional poetry. Both the life and the works of the poet have embarked the readers of the literature at a flux. The works and life of Plath are often associated with history- the Nazi period in which she lived. The Nazi versus Jews elements were personally put into her life as she thinks that she has become a mixture of both as born to a Nazi father and Jewish mother. The transfusion of both the elements was present in the works of the Plath. The poetical genius of Plath was often compared to the classic writer, Emile Bronte who popularized the Gothic genres in English. Both the writers have some elements in common- the depressed state and the treatment of the subject matters- death. So the individual seclusion, which both of them had witnessed in their life, could be shown its reflection in their works. Both Sylvia Plath (1932-1963) and Emily Bronte (1818-1848) had many similar experiences in their life which showed its counterparts in their writing. Sylvia Plath was a person who wandered through experiences to see her father’s counterpart in life as her father Otto Plath has died at her age of eight. Though the marriage of her with Ted Hughes has made in her a kind of solution soon it turned to become a downfall. Emily Bronte, though not married had affected with the loss of her mother when she was only three. The writer, Susan Kavaler-Adler says in her book, The Creative Mystique: from red shoes frenzy to love and creativity that Emile Bronte like Sylvia Plath had the experience of “separation-individualism” (Kavaler-Adler 11). Both of them had their influence on their father. Susan Kavaler-Adler further says that most women artists like Emily Bronte, “suffered a primal loss of the mother which harshly influenced the way the father was internalized and deployed in the internal world” (Kavaler-Adler 11). These two writers represented the age at which they lived. The pseudonym of Emily Bronte, Ellis Bell and the only novel of Plath, ‘The Bell Jar,’ take some kind of comparison. Plath had published the novel under the pseudonym, Victoria Lucas. The writers used the pseudonym in order to conceal their true identity to the then readers. Sylvia Plath, a modern writer had more exposure to the world whereas Bronte was put inside her house. The series of death that Emily witnessed in her life has made her tantalize with the effects of death in her. It was the insanitary condition of the house of Bronte which inflicted the symptoms of tuberculosis and eventually her death in 1848. The presentation of Heathcliff and Catherine Earnshaw in the novel, Wuthering heights of Emily Bronte posthumously published in 1847, is a clear cut narrative description of the Gothic Middle English ages. The novel set in the moor background depicts the social milieu of the period in which she lived. She was rather afraid towards the concept of marriage which remains to be a crucial aspect in her personal life. U.C. Knoepflamacher speaks out, “The sexual consummation of marriage is consistently depicted as dangerous by Bronte” (Knoepflmacher 92). The personal life of the author could be seen at short intervals in the novel The Wuthering heights. The second dream of Lockwood allows plunging into the narrative of the life between Heathcliff and Catherine culminating the tragic incidents in it. The life of Plath is very clear in her work, The Bell Jar, an autobiographical novel. It puts forward the mental trauma of the author in her life. Esther Greenwood a replica of Plath runs through the real life of the aut ...Download file to see next pagesRead More
Share:
Tags
Cite this document
(“Comparison of the Poet Sylvia Plath with Emily Bronte Essay”, n.d.)
Retrieved from https://studentshare.org/literature/1439266-sylvia-plath-with-emily-bronte
(Comparison of the Poet Sylvia Plath With Emily Bronte Essay)
https://studentshare.org/literature/1439266-sylvia-plath-with-emily-bronte.
“Comparison of the Poet Sylvia Plath With Emily Bronte Essay”, n.d. https://studentshare.org/literature/1439266-sylvia-plath-with-emily-bronte.
Comments (1)
Click to create a comment or rate a document

om
omuller added comment 1 year ago
Student rated this paper as
At first, I thought 4 of pages is too much for such a subject. But now I see it could not be done smarter. As the author starts you see the depth of the subject. I’ve read all at once. Terrific text

... A Comparison Between Yoshitomo Nara and Takashi Murakami Yoshitomo Nara and Takashi Murakami are both recognized across the globe for the fine pieces of artistic work that they made and also their general contribution to the world of art. These artistes were born and raised in Japan and their works of art all revolve around anime characters. They wanted to be artistes ever since they were young and this prompted them to enroll for Arts in the University. Murakami went to Tokyo National University to study Fine Arts and Music while Yoshitomo enrolled in Aichi Prefectural University of Fine Arts and Music. Yoshimoto was born in Hirosaki in northern Japan in 1959. Being the youngest child among three boys, he faced a lonely child owing...
6 Pages(1500 words)Case Study

However, Bandura pointed out that the environment is not only the essential factors when it comes to learning things, the actual mental state of a person is also important, which allowed social learning theory to be recognized as a social cognitive theory, at some point, by which people are assumed to be self-determined and self-efficacious.
Considering that people can learn through observation and cognitive response, the actual process of change in behavior will not necessarily take place. This means that the behavior-change process would mean that learning does not necessarily lead to a person’s change in behavior (Stuart, 2003, p.43).
Social learning theory, therefore, is good for aiding society to understand...
9 Pages(2250 words)Coursework
sponsored ads
Save Your Time for More Important Things
Let us write or edit the essay on your topic "Comparison of the Poet Sylvia Plath with Emily Bronte" with a personal 20% discount.
GRAB THE BEST PAPER

Let us find you another Essay on topic Comparison of the Poet Sylvia Plath with Emily Bronte for FREE!