This Way for the Gas, Ladies and Gentlemen - Term Paper Example

Comments (0)
Add to wishlistDelete from wishlist
Cite this document
Summary
He is famous because of his stories of Holocaust as he elaborated the tough life an experiences in camps and in the witnesses of totalitarianism. In those camps he faced the…
Download full paperFile format: .doc, available for editing
HIDE THIS PAPERGRAB THE BEST PAPER94.5% of users find it useful 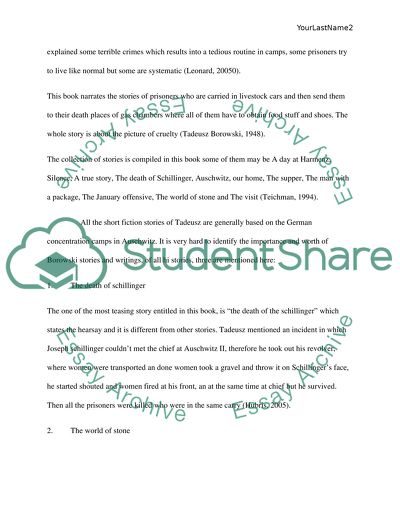 Extract of sample "This Way for the Gas, Ladies and Gentlemen"

Download file to see previous pages He is a very popular journalist, writer and poet of Poland (Borowski, 1948).
Tadeusz first book” This Way for the Gas, Ladies and Gentlemen” he mentioned collection of short Auschwitz stories as he was imprisoned in Auschwitz which is a place of mutual liabilities, mutual contribution and mutual fault in the Nazis Camps. In this book Tadeusz explained some terrible crimes which results into a tedious routine in camps, some prisoners try to live like normal but some are systematic (Leonard, 20050).
This book narrates the stories of prisoners who are carried in livestock cars and then send them to their death places of gas chambers where all of them have to obtain food stuff and shoes. The whole story is about the picture of cruelty (Tadeusz Borowski, 1948).
The collection of stories is compiled in this book some of them may be A day at Harmenz, Silence, A true story, The death of Schillinger, Auschwitz, our home, The supper, The man with a package, The January offensive, The world of stone and The visit (Teichman, 1994).
All the short fiction stories of Tadeusz are generally based on the German concentration camps in Auschwitz. It is very hard to identify the importance and worth of Borowski stories and writings, of all hi stories, three are mentioned here:
The one of the most teasing story entitled in this book, is “the death of the schillinger” which states the hearsay and it is different from other stories. Tadeusz mentioned an incident in which Joseph schillinger couldn’t met the chief at Auschwitz II, therefore he took out his revolver, where women were transported an done women took a gravel and throw it on Schillinger’s face, he started shouted and women fired at his front, an at the same time at chief but he survived. Then all the prisoners were killed who were in the same carry (Hubris, 2005).
This story revolves like a pendulum between a normal life and the life after death camp ...Download file to see next pagesRead More
Share:
Tags
Cite this document
(“This Way for the Gas, Ladies and Gentlemen Term Paper - 1”, n.d.)
Retrieved from https://studentshare.org/literature/1438173-this-way-for-the-gas-ladies-and-gentlemen

(This Way for the Gas, Ladies and Gentlemen Term Paper - 1)
https://studentshare.org/literature/1438173-this-way-for-the-gas-ladies-and-gentlemen.

“This Way for the Gas, Ladies and Gentlemen Term Paper - 1”, n.d. https://studentshare.org/literature/1438173-this-way-for-the-gas-ladies-and-gentlemen.
Comments (0)
Click to create a comment or rate a document

CHECK THESE SAMPLES OF This Way for the Gas, Ladies and Gentlemen

Let us find you another Term Paper on topic This Way for the Gas, Ladies and Gentlemen for FREE!