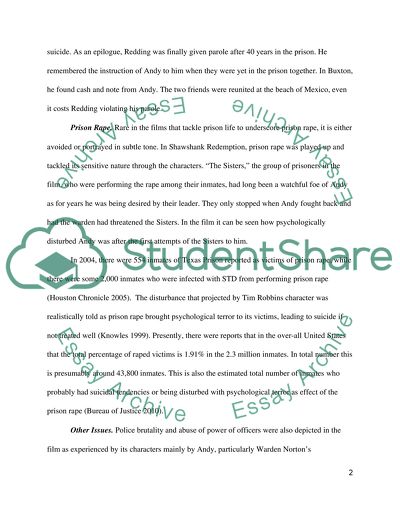 Download file to see previous pages The film was directed by Frank Darabont and was portrayed by Tim Robbins as the main protagonist, Andy Dufrasne, and Morgan Freeman as Ellis Redding. It was shown in theatres in 1994 and won several awards including Academy Awards in the same year. (Felchner 2010)
Summary. Andy Dufrasne was wrongly convicted for the murder of his wife and her lover due to a strong evidence planted against him. He was sentenced life at Maine’s Shawshank State Prison. Behind bars, he was dealing with the harsh reality of life in a prison cell brought upon by many hardships and cruelties inside; prison rape, riot, and warden brutality to name some. While dealing all with these, he befriended with Ellis Redding whose parole application was rejected. Warden Norton had Andy involved in his money laundering act in exchange of private cell and to maintain his work as librarian in the library cell. After some years, a newly incarcerated Tommy Williams was almost the key to prove the innocence of Andy, yet Norton managed to have him killed as he was afraid that if Andy will be freed, he might expose him. Eventually, Andy managed to escape the prison cell by digging a tunnel in the wall of his cell covered with poster of Raquel Welch. After escaping he exposed Norton and his company with his money laundering to the local newspaper. Upon the day of his arrest, Norton committed suicide. As an epilogue, Redding was finally given parole after 40 years in the prison. He remembered the instruction of Andy to him when they were yet in the prison together. In Buxton, he found cash and note from Andy. The two friends were reunited at the beach of Mexico, even it costs Redding violating his parole. Prison Rape. Rare in the films that tackle prison life to underscore prison rape, it is either avoided or portrayed in subtle tone. In Shawshank Redemption, prison rape was played up and tackled its sensitive nature through the characters. “The Sisters,” the group of prisoners in the film, who were performing the rape among their inmates, had long been a watchful foe of Andy as for years he was being desired by their leader. They only stopped when Andy fought back and had the warden had threatened the Sisters. In the film it can be seen how psychologically disturbed Andy was after the first attempts of the Sisters to him. In 2004, there were 554 inmates of Texas Prison reported as victims of prison rape, while there were some 2,000 inmates who were infected with STD from performing prison rape (Houston Chronicle 2005). The disturbance that projected by Tim Robbins character was realistically told as prison rape brought psychological terror to its victims, leading to suicide if not treated well (Knowles 1999). Presently, there were reports that in the over-all United States that the total percentage of raped victims is 1.91% in the 2.3 million inmates. In total number this is presumably around 43,800 inmates. This is also the estimated total number of inmates who probably had suicidal tendencies or being disturbed with psychological terror as effect of the prison rape (Bureau of Justice 2010). Other Issues. Police brutality and abuse of power of officers were also depicted in the film as experienced by its characters mainly by Andy, particularly Warden Norton’s manipulation to Andy for being the front guy of his money laundering act. Inmate killing was also tackled in order to preserve the interest of those in higher power in the expense ...Download file to see next pages Read More
Share:
Tags
Cite this document
(“Realistic Portrayal of Prison Life in Movies based on Stephen Kings Essay”, n.d.)
Retrieved from https://studentshare.org/literature/1418815-realistic-portrayal-of-prison-life-in-movies-based-on-stephen-kings-novels

(Realistic Portrayal of Prison Life in Movies Based on Stephen Kings Essay)
https://studentshare.org/literature/1418815-realistic-portrayal-of-prison-life-in-movies-based-on-stephen-kings-novels.

“Realistic Portrayal of Prison Life in Movies Based on Stephen Kings Essay”, n.d. https://studentshare.org/literature/1418815-realistic-portrayal-of-prison-life-in-movies-based-on-stephen-kings-novels.
Comments (0)
Click to create a comment or rate a document

Analysis of The Maltese Falcon and Le Mepris Movies

German Expressionism began to gain currency during the 1920s and used a lot of symbolism and mise-en-scene4 that borders on imaginative handling. Though a number of films were made in keeping with this novel discovery, none of them could match the ‘master effect’ of it as “Pandora’s Box” 5 did. German Expressionism had a big impact on Hollywood by way of influencing some of the big studios to employ German émigrés who were mostly cinematographers and directors fleeing Nazi rule in Germany.

Expressionism, particularly, had a positive effect on the horror genre and the noir genre – both highly receptive to imaginary influences in design and production. Though the very far...
9 Pages (2250 words) Movie Review

Community life has its advantages but also has its limitations to the members and the outsiders.
“The good things we secure for ourselves are uncertain and precious until it is secured for everyone and incorporated into our common life.”-Jane Addams. With society moving faster and more detached to technology, busy schedules, and job changes, it becomes harder and harder to feel a sense of community. This can result in a life of solitude and a lose a sense of belonging. Community life helps extract people out of this solitude life and introduce better, challenging and fun tasks such as participation in acts of kindness. It also provides room for volunteering, meeting neighbors, discussing important issues with othe...
7 Pages (1750 words) Case Study
sponsored ads
Save Your Time for More Important Things
Let us write or edit the essay on your topic "Realistic Portrayal of Prison Life in Movies based on Stephen Kings Novels" with a personal 20% discount.
GRAB THE BEST PAPER

Let us find you another Essay on topic Realistic Portrayal of Prison Life in Movies based on Stephen Kings Novels for FREE!