Comments (0)
Add to wishlistDelete from wishlist
Cite this document
Summary
The poem reiterates the tale of unleashed violence and bloodshed that the people of this world face now. A common concern in Johnson’s poetry is the politics and consequently it is observed that the poet regards this outburst of destruction as a result of the injustices that have been done to the common public by their rulers. …
Download full paperFile format: .doc, available for editing
HIDE THIS PAPERGRAB THE BEST PAPER94.1% of users find it useful 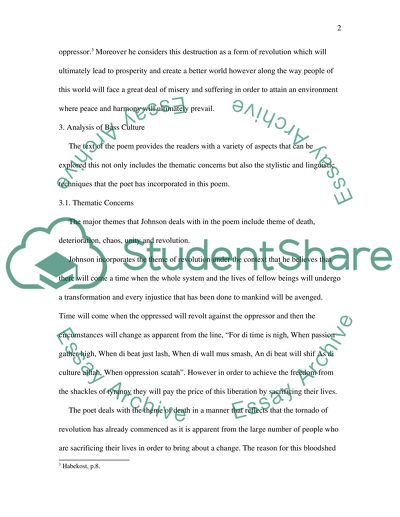 The major themes that Johnson deals with in the poem include theme of death, deterioration, chaos, unity and revolution. Johnson incorporates the theme of revolution under the context that he believes that there will come a time when the whole system and the lives of fellow beings will undergo a transformation and every injustice that has been done to mankind will be avenged. Time will come when the oppressed will revolt against the oppressor and then the circumstances will change as apparent from the line, “For di time is nigh, When passion gather high, When di beat just lash, When di wall mus smash, An di beat will shif As di culture alltah, When oppression scatah”. However in order to achieve the freedom from the shackles of tyranny they will pay the price of this liberation by sacrificing their lives. The poet deals with the theme of death in a manner that reflects that the tornado of revolution has already commenced as it is apparent from the large number of people who are sacrificing their lives in order to bring about a change. The reason for this bloodshed and revolt is that now the people have started realizing the folly of their government and they have decided not to live the life of a slave as stated in the poem, “High temperature blood, Swinging anger, Shatterin di tightened hold”. Moreover another interesting theme that Johnson explores is that unity is strength. He illustrates that the oppressed together as one entity are a force to be reckoned. He presents his readers with the idea that the unity of all the people will help them succeed in bringing about a change as he mentions in the poem, “Spirits riled, An rise an rail thunda-wise, Latent powah, in a form resemblinmadness, Like violence is di show burstin outta slave shackle” ...Download file to see next pagesRead More
Share:
Tags
Cite this document
(“Analysis of the Poem Bass Culture by Linton Kwesi Johnson Essay”, n.d.)
Retrieved from https://studentshare.org/literature/1413381-analysis-of-the-poem-bass-culture-by-linton-kwesi-johnson

In th...
8 Pages(2000 words)Case Study
sponsored ads
Save Your Time for More Important Things
Let us write or edit the essay on your topic "Analysis of the Poem Bass Culture by Linton Kwesi Johnson" with a personal 20% discount.
GRAB THE BEST PAPER

Let us find you another Essay on topic Analysis of the Poem Bass Culture by Linton Kwesi Johnson for FREE!