Comparison of The Lady with the Pet Dog by Anton Chekhov, and Tarzan by Edgar Rice Burroughs - Essay Example

Comments (0)
Add to wishlistDelete from wishlist
Cite this document
Summary
This essay is a comparison of The Lady with the Pet Dog by Anton Chekhov with Tarzan a story written by Edgar Rice Burroughs. The essay focuses on the different themes in the two stories particularly the theme of love in Chekhov’s story as likened to that or hatred in Edgar's story…
Download full paperFile format: .doc, available for editing
HIDE THIS PAPERGRAB THE BEST PAPER94.4% of users find it useful 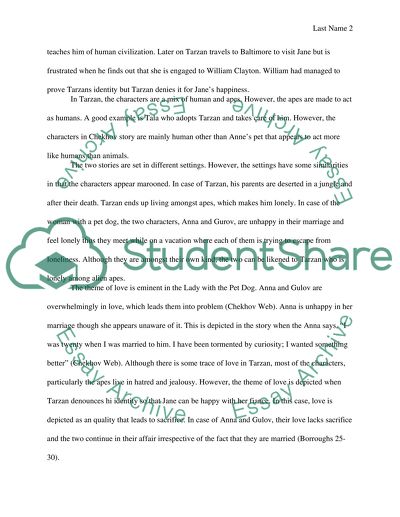 Extract of sample "Comparison of The Lady with the Pet Dog by Anton Chekhov, and Tarzan by Edgar Rice Burroughs"

CHECK THESE SAMPLES OF Comparison of The Lady with the Pet Dog by Anton Chekhov, and Tarzan by Edgar Rice Burroughs

... A Comparison Between Yoshitomo Nara and Takashi Murakami Yoshitomo Nara and Takashi Murakami are both recognized across the globe for the fine pieces of artistic work that they made and also their general contribution to the world of art. These artistes were born and raised in Japan and their works of art all revolve around anime characters. They wanted to be artistes ever since they were young and this prompted them to enroll for Arts in the University. Murakami went to Tokyo National University to study Fine Arts and Music while Yoshitomo enrolled in Aichi Prefectural University of Fine Arts and Music. Yoshimoto was born in Hirosaki in northern Japan in 1959. Being the youngest child among three boys, he faced a lonely child owing...
6 Pages(1500 words)Case Study

However, Bandura pointed out that the environment is not only the essential factors when it comes to learning things, the actual mental state of a person is also important, which allowed social learning theory to be recognized as a social cognitive theory, at some point, by which people are assumed to be self-determined and self-efficacious.
Considering that people can learn through observation and cognitive response, the actual process of change in behavior will not necessarily take place. This means that the behavior-change process would mean that learning does not necessarily lead to a person’s change in behavior (Stuart, 2003, p.43).
Social learning theory, therefore, is good for aiding society to understand...
9 Pages(2250 words)Coursework
sponsored ads
Save Your Time for More Important Things
Let us write or edit the essay on your topic "Comparison of The Lady with the Pet Dog by Anton Chekhov, and Tarzan by Edgar Rice Burroughs" with a personal 20% discount.
GRAB THE BEST PAPER

Let us find you another Essay on topic Comparison of The Lady with the Pet Dog by Anton Chekhov, and Tarzan by Edgar Rice Burroughs for FREE!