Comments (0)
Add to wishlistDelete from wishlist
Cite this document
Summary
John Steinbeck committed a great deal of his literary genius to turning experience into art. As Demott informs, much of Steinbeck’s work was based on biographical experience, his own personal consciousness and experiences. Much of these experiences and observations depicted a great degree of hopelessness, want and suffering. …
Download full paperFile format: .doc, available for editing
HIDE THIS PAPERGRAB THE BEST PAPER96% of users find it useful 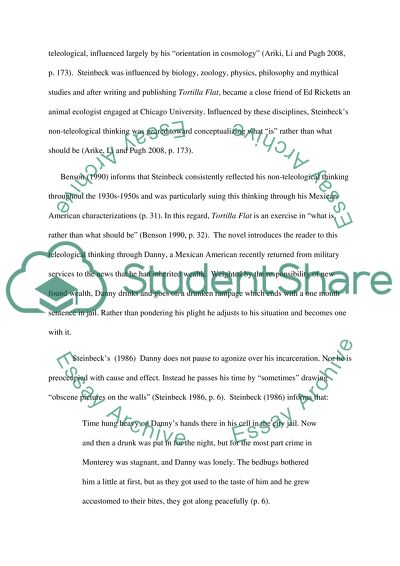 Download file to see previous pages Steinbeck wrote the short novel Tortilla Flat in the summer and fall of 1933 and it was published in 1935 (Railsback and Meyer 2006, p. 215). Steinbeck was described as non-teleological, influenced largely by his “orientation in cosmology” (Ariki, Li and Pugh 2008, p. 173). Steinbeck was influenced by biology, zoology, physics, philosophy and mythical studies and after writing and publishing Tortilla Flat, became a close friend of Ed Ricketts an animal ecologist engaged at Chicago University. Influenced by these disciplines, Steinbeck’s non-teleological thinking was geared toward conceptualizing what “is” rather than what should be (Arike, Li and Pugh 2008, p. 173).
Benson (1990) informs that Steinbeck consistently reflected his non-teleological thinking throughout the 1930s-1950s and was particularly suing this thinking through his Mexican-American characterizations (p. 31). In this regard, Tortilla Flat is an exercise in “what is, rather than what should be” (Benson 1990, p. 32). The novel introduces the reader to this teleological thinking through Danny, a Mexican American recently returned from military services to the news that he had inherited wealth. Weighted by the responsibility of new found wealth, Danny drinks and goes on a drunken rampage which ends with a one month sentence in jail. Rather than pondering his plight he adjusts to his situation and becomes one with it. Steinbeck’s (1986) Danny does not pause to agonize over his incarceration. Nor he is preoccupied with cause and effect. Instead he passes his time by “sometimes” drawing “obscene pictures on the walls” (Steinbeck 1986, p. 6). Steinbeck (1986) informs that: Time hung heavy on Danny’s hands there in his cell in the city jail. Now and then a drunk was put in for the night, but for the most part crime in Monterey was stagnant, and Danny was lonely. The bedbugs bothered him a little at first, but as they got used to the taste of him and he grew accustomed to their bites, they got along peacefully (p. 6). This is characteristic of Tortilla Flat in its manifestation of Steinbeck’s non-teleological thinking and influences. Danny is not only Mexican-American, he is a pasiano, whom Steinbeck (1986) describes as an individual with Spanish, Indian, Mexican and Caucasian. Through Danny’s experience in jail we learn that accepting events as they happen is conducive to the pasiano’s nature. Danny’s acceptance of the bedbugs is also reflective of Steinbeck’s non-teleological thinking in terms of becoming one with nature. Benson (1990) goes further to suggest that the oneness with nature extends to attach to the pasiano’s close contacts, because: For the “is” thinker accepts not only life and nature but also the others with whom he comes into contact (p. 32). The penchant for accepting things as they are is rooted in teleological conceptualization that simplicity and consistency breeds freedom and thus happiness. It also dictates that man’s struggles are implicit in man “as an entity and man as a member of a group” ...Download file to see next pagesRead More
Share:
Tags
Cite this document
(“Personal Reality in Selected Works of John Steinbeck Essay”, n.d.)
Retrieved de https://studentshare.org/literature/1390434-personal-reality-in-selected-works-of-john-steinbeck

In order to better regard this topic, a brief history of the implementation of the current Canadian health care system must be discussed. Further, appropriate financial matters should be considered. For the purposes of this essay, laws, and policies applicable to Canadian health care will not be evaluated in detail. However, the Chaouilli case in Quebec will be acknowledged, so as to direct the focus of the essay toward to possibility of the developmental path for a privatized health care system in Canada. Issues concerning the waiting line which may have been expressed on other occasions will be considered as well. Their role in the advancement of the privatization of health care in Canada will be further evaluated.
The Cana...
12 Pages(3000 words)Assignment

Is Your Reality for Real

It is hoped that with the insights shared, the readers will come to a realization that all individual though unique and may be constrained by certain factors, is still capable of achieving a reality that will benefit not only him but the world around him as well. It only takes open-mindedness and willingness to teach and to learn in order to create that intended reality. Existing realities need not be questioned nonetheless, for they are the ones that make living more meaningful and challenging.
Reality is not just an illusion or something that exists in the mind of a single or a group of persons. If it had been the case, the misunderstanding would definitely be a constant part of the reality. Part of what makes a man human i...
16 Pages(4000 words)Assignment

Locke's presence at Ashley’s home was more than that of a physician. After Lord Ashley became Earl of Shaftesbury and declared Lord Chancellor,...
9 Pages(2250 words)Term Paper
sponsored ads
Save Your Time for More Important Things
Let us write or edit the essay on your topic "Personal Reality in Selected Works of John Steinbeck" with a personal 20% discount.
GRAB THE BEST PAPER

Let us find you another Essay on topic Personal Reality in Selected Works of John Steinbeck for FREE!