Comments (0)
Add to wishlistDelete from wishlist
Cite this document
Summary
The Supreme Court of Rhode Island convicted Brian Burbine of 1st degree murder, reaffirmed the decision of jury, and rejected Brian’s claim that as per Fifth Amendment and Fourteenth Amendment of the Constitution, his signed confessions in the form of waivers should be…
Download full paperFile format: .doc, available for editing
HIDE THIS PAPERGRAB THE BEST PAPER92.3% of users find it useful 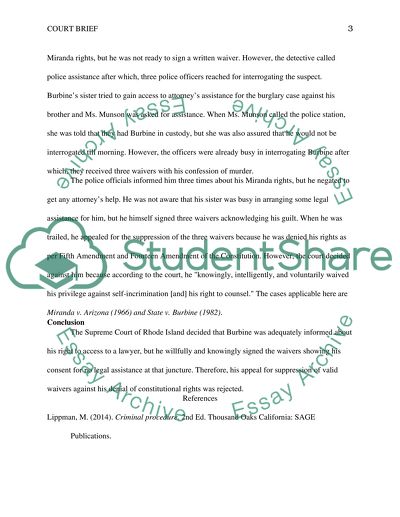 Court Brief for Moran v. Burbine, 475 U.S. 412 (1986), O’Connor J. No: Court Brief for Moran v. Burbine, 475 U.S. 412 (1986), O’Connor J.
Introduction
The Supreme Court of Rhode Island convicted Brian Burbine of 1st degree murder, reaffirmed the decision of jury, and rejected Brian’s claim that as per Fifth Amendment and Fourteenth Amendment of the Constitution, his signed confessions in the form of waivers should be suppressed. This paper will use IRAC method for briefing the case.
Issue
The issue highlighted in the case Moran v. Burbine is violation of Fifth and Fourth Amendment by the police officials who interrogated and attained three valid waivers of confession of murder. Whether the pre-arraignment confession of Burbine’s crime in form of valid waivers be suppressed because of police’s failure to report the suspect of attorney’s attempt to reach him or was he adequately informed of his right to access a lawyer?
Rule
The Providence Police informed Burbine of his Miranda Rights according to which, he could ask for an attorney’s presence “to dissipate the compulsion inherent in custodial interrogation and, in so doing, guard against abridgement of the suspect’s Fifth Amendment Rights”. In three sessions, the police informed him of his Miranda rights and he signed a written form acknowledging, “he [did] not want an attorney called or appointed for [him]” due to which, the court ruled out that he "knowingly, intelligently, and voluntarily waived his privilege against self-incrimination [and] his right to counsel." So, his conviction was retained.
Analysis
Brian Burbine was arrested along with two others with charge of local burglary. Before the arrest, Detective Ferranti found out through a confidential report that Burbine who was known with the name Butch murdered Ms. Hickey brutally some months ago. She was left unconscious and wounded in a factory parking lot after which, she was sent to the hospital where she died after three weeks because of her wounds. The Detective informed Burbine about his Miranda rights, but he was not ready to sign a written waiver. However, the detective called police assistance after which, three police officers reached for interrogating the suspect. Burbine’s sister tried to gain access to attorney’s assistance for the burglary case against his brother and Ms. Munson was asked for assistance. When Ms. Munson called the police station, she was told that they had Burbine in custody, but she was also assured that he would not be interrogated till morning. However, the officers were already busy in interrogating Burbine after which, they received three waivers with his confession of murder.
The police officials informed him three times about his Miranda rights, but he negated to get any attorney’s help. He was not aware that his sister was busy in arranging some legal assistance for him, but he himself signed three waivers acknowledging his guilt. When he was trailed, he appealed for the suppression of the three waivers because he was denied his rights as per Fifth Amendment and Fourteen Amendment of the Constitution. However, the court decided against him because according to the court, he "knowingly, intelligently, and voluntarily waived his privilege against self-incrimination [and] his right to counsel." The cases applicable here are Miranda v. Arizona (1966) and State v. Burbine (1982).
Conclusion
The Supreme Court of Rhode Island decided that Burbine was adequately informed about his right to access to a lawyer, but he willfully and knowingly signed the waivers showing his consent for no legal assistance at that juncture. Therefore, his appeal for suppression of valid waivers against his denial of constitutional rights was rejected.
References
Lippman, M. (2014). Criminal procedure. 2nd Ed. Thousand Oaks California: SAGE Publications. Read More
Share:
Tags
Cite this document
(“Court Brief 3 Assignment Example | Topics and Well Written Essays - 500 words”, n.d.)
Court Brief 3 Assignment Example | Topics and Well Written Essays - 500 words. Retrieved from https://studentshare.org/law/1679204-court-brief-3

CHECK THESE SAMPLES OF Court Brief 3

Memorandum of Points and Authorities AKA Trail Court Brief

...?Trial Brief The following is a trial brief prepared by (insert NEW MEXICO DISTRICT COURT OF NEW MEXICO NO. CIV. 03-388 Plaintiff, JANE WHITE VS. JEFFERY CALKIN Defendant BRIEF IN OPPOSITION TO MOTION TO DISMISS PRELIMINARY STATEMENT Jane White, the plaintiff, collided with Jeffery Calkin, the defendant, who failed to stop at a stop sign. Ms. White filed a complaint against Sage Rent-A-Car Inc. for negligence in failing to carry insurance. Sage plans to file a Rule 1-012B (6) motion to dismiss for failure to state a claim, alleging that it has filed a surety bond with the superintendent of insurance and is self-insured under the Act, and as such does not read the Act to extend liability to lessors for the damages that result... IS A SET OF...
3 Pages(750 words)Essay

...followed by the ratio decidendi as laid down by the hon’ble Supreme Court. This Case Brief also aims at answering some of the following questions: 1. Were Terry and the other men in violation of the Fourth Amendment? 2. What was the position of law before Terry v. Ohio? 3. What analysis did the court make in delivering the judgment? 4. What are the future effects of this Case on policing and law enforcement? Case Brief Factual Matrix In the instant case, the Petitioner sought a review of the judgment passed by the Ohio Supreme Court which affirmed the Petitioner’s Conviction in the lower Court for carrying a concealed...
4 Pages(1000 words)Case Study

...7 November Assignment In the renowned Supreme Court Case of Jackson v. Birmingham Board of Education, the rule of law was held to be that retaliating against a person because he has complained of being discriminated on the grounds of sex falls under a branch of intentional sex discrimination, which is encompassed by Title IX. This was an important case with respect to intentional sex discrimination and never before had such principle of law been enunciated by the Judiciary. In the light of the selected case, teacher by the name of Roderick Jackson, teaching in the Birmingham, Alabama public school system, brought a suit against the Birmingham Board of Education alleging that the board retaliated against him because he...
3 Pages(750 words)Case Study

...Intervention 3 – Brief Imagery Script for the Bulldog baseball team We are back to the field for another competition. Today is the day. The day of my excellent performance. I must make our team get the highest runs. I feel relaxed and confident. The smell of grass and warmth sun on my face makes me thrilled. I breath. I have practiced a lot for this game and my playing has improved. I take my position with confidence and feel completely connected to the game. I hear the songs of our fans and I feel like a hero. I feel appreciated. The feel of the bat in my hands makes me feel close to it like a friend I trust. With this, I know I will perform. I take time and breathe again. I am ready. My body is ready. I...
1 Pages(250 words)Case Study

...or influence public policies through its rulings or decisions (SpecialEducationAdvisor.com, 2010, P.1, L. 19- 26, C.3). Court decisions can have huge policy impacts. Because judges are not policy experts, the judicial ruling policy implications may not be fully appreciated when they are enacted. For example, it can be explained by the fact that since every district law is unique and tailored to the needs of its students. It, therefore, means that some of these laws can affect the courts especially if it comes to the difficulties associated with the learner’s demands or needs. Therefore, the awareness of the judicial over particular policies drives them to disclose, change and improve...
1 Pages(250 words)Assignment

...Brief of Case 3 Case: David G. Byker v. Thomas J. Mannes, 641 N.W.2d 210 (2002) Procedure: Plaintiff, David Byker filed suit for the recovery of money lost in a partnership with defendant. Defendant is Thomas Mannes. Defendant won trial in the Court of Appeals. Plaintiff appealed to the Supreme Court of Michigan. Facts: {David Byker} was an accountant for defendant until they ventured in real estate business together. They engaged in multiple enterprises, agreeing to share all profits, losses, and expenses. To facilitate limited partnership investment, they created separate entities becoming general partners/ shareholders. The parties pursued several enterprises, M &B...
1 Pages(250 words)Essay
sponsored ads
Save Your Time for More Important Things
Let us write or edit the assignment on your topic "Court Brief 3" with a personal 20% discount.
GRAB THE BEST PAPER

Let us find you another Assignment on topic Court Brief 3 for FREE!