Comments (0)
Add to wishlistDelete from wishlist
Cite this document
Summary
The paper 'Restorative Justice Policies in American Criminal Justice' presents Lex Taliones, eye for an eye, the principle of retributive justice which indicates specific punishments for specific crimes. According to the code, the punishment should be equal to that of the crime…
Download full paperFile format: .doc, available for editing
HIDE THIS PAPERGRAB THE BEST PAPER94.9% of users find it useful 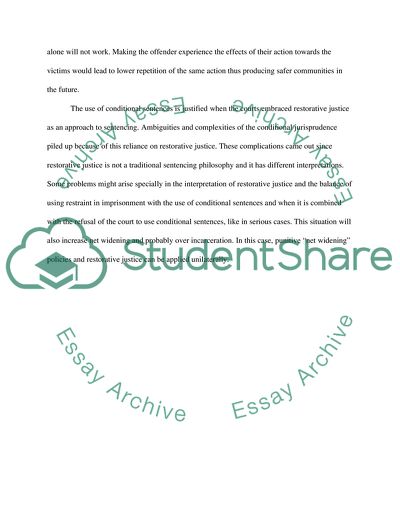 During the progression of court proceedings, the plea-bargaining begins and the person charged with the crime would eventually deny accountability, his representative would eventually bargain for a lesser charge and punishment in exchange for a guilty plea. Supposedly, in these proceedings, justice is served and the offender is sent to prison.
Net widening is where offenders are subjected to more invasive sanctions than before­­. When offenders are going to be subjected to probation orders or are going to be fined, they are now subjected to conditional sentences. If ever that the offender got imprisoned for violating a conditional sentence or be jailed for more than he should be than if he had never been subject to conditional sentence order ( Cohen and Reaves, 2007).
On the other hand, restorative justice involves the victim, the offender and the community in a meaningful journey of healing, renewal, and recompense. This system makes offenders accountable for what they have done and would let them recognize that injustice violates people and relationship. It would show to them that every there violation entails an obligation to fix the mistake. Through this system, we can realize that punishing the offender alone will not work. Making the offender experience the effects of their action towards the victims would lead to lower repetition of the same action thus producing safer communities in the future.
The use of conditional sentences is justified when the courts embraced restorative justice as an approach to sentencing. Ambiguities and complexities of the conditional jurisprudence piled up because of this reliance on restorative justice. These complications came out since restorative justice is not a traditional sentencing philosophy and it has different interpretations. Some problems might arise especially in the interpretation of restorative justice and the balance of using restraint in imprisonment with the use of conditional sentences and when it is combined with the refusal of the court to use conditional sentences, like in serious cases. This situation will also increase net widening and probably over-incarceration. In this case, punitive “net widening” policies and restorative justice can be applied unilaterally. Read More
Share:
Tags
Cite this document
(Restorative Justice Policies in American Criminal Justice Essay, n.d.)
Restorative Justice Policies in American Criminal Justice Essay. Retrieved from https://studentshare.org/law/1597419-punitive-vs-restorative-justice-policies-in-american-criminal-justice
(Restorative Justice Policies in American Criminal Justice Essay)
Restorative Justice Policies in American Criminal Justice Essay. https://studentshare.org/law/1597419-punitive-vs-restorative-justice-policies-in-american-criminal-justice.
“Restorative Justice Policies in American Criminal Justice Essay”, n.d. https://studentshare.org/law/1597419-punitive-vs-restorative-justice-policies-in-american-criminal-justice.
Comments (0)
Click to create a comment or rate a document

Each of the members shall, thus, introduce themselves in terms of their educational background and personal experiences for familiarity purposes. Let us begin with Mr. Colbert.
Colbert: I work at Quad Enterprises in the HRM department as the chief manager. I am overly concerned with the current juvenile justice system, bearing in mind that numerous people have debated upon it since time immemorial. I take a categorical interest in this issue since I have been a victim of juvenile violence. My opinion regarding the current trends in this law field is nobly affirmative. The current juvenile system is perfect. Thank you.
Amanda: I currently am a Law lecturer at a University. I am extremely interested in this issue too. My e...
7 Pages(1750 words)Essay
sponsored ads
Save Your Time for More Important Things
Let us write or edit the essay on your topic "Restorative Justice Policies in American Criminal Justice" with a personal 20% discount.
GRAB THE BEST PAPER

Let us find you another Essay on topic Restorative Justice Policies in American Criminal Justice for FREE!