Comments (0)
Add to wishlistDelete from wishlist
Cite this document
Summary
The rainmaker is a novel by John Grisham that highlights the corrupt dealings of an insurance company that denies the claim of one of its client who is suffering from leukemia and who is in need of a bone marrow transplant before time runs out for him. …
Download full paperFile format: .doc, available for editing
HIDE THIS PAPERGRAB THE BEST PAPER94.4% of users find it useful 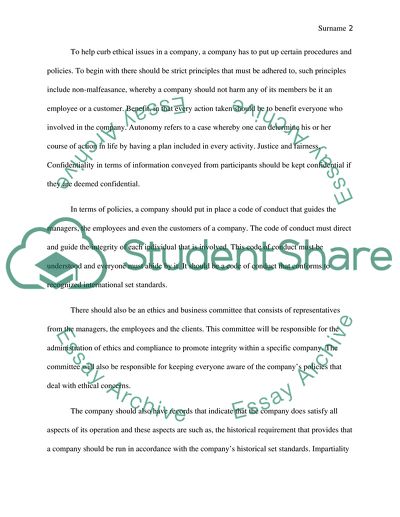 ﻿Business LAW
The rainmaker is a novel by John Grisham that highlights the corrupt dealings of an insurance company that denies the claim of one of its client who is suffering from leukemia and who is in need of a bone marrow transplant before time runs out for him.
The book narrates of a practicing lawyer who is engaged in an ex-parte discussion with a judge in the above case. An ex-parte communication is such a communication that is not encouraged as it could prejudice the outcome of a case. An ex-parte communication occurs when judge and an attorney, representative or a party to the case engage in talks regarding some crucial matters, facts or issues in a case without involving the opposing party, representative, or attorney thereby hampering the decision of the court.
It is through these ex-parte conversations that the insurance company was able to gain a greater advantage of winning the case. It is noted in the novel that the insurance company initiated a policy whereby they denied all claims without regarding the merits of the case. The insurance policy becomes fraudulent one can never be party to a contract of service that does not include performance. As there is no performance then the policies become fraudulent as the insurance company denies claims regardless of whether such claims were covered under their policies.
Ethical issues are becoming a weighty problem in today’s world. The Wall Street Journal presented a number of these issues that begin with greed, malfeasance, self-enrichment, dishonesty, illegal undertakings and profit orientations as the major ethical issues that companies are identified with (Mackenzie, 2010).
To help curb ethical issues in a company, a company has to put up certain procedures and policies. To begin with there should be strict principles that must be adhered to, such principles include non-malfeasance, whereby a company should not harm any of its members be it an employee or a customer. Benefit, in that every action taken should be to benefit everyone who involved in the company. Autonomy refers to a case whereby one can determine his or her course of action in life by having a plan included in every activity. Justice and fairness, Confidentiality in terms of information conveyed from participants should be kept confidential if they are deemed confidential.
In terms of policies, a company should put in place a code of conduct that guides the managers, the employees and even the customers of a company. The code of conduct must direct and guide the integrity of each individual that is involved. This code of conduct must be understood and everyone must abide by it. It should be a code of conduct that conforms to recognized international set standards.
There should also be an ethics and business committee that consists of representatives from the managers, the employees and the clients. This committee will be responsible for the administration of ethics and compliance to promote integrity within a specific company. The committee will also be responsible for keeping everyone aware of the company’s policies that deal with ethical concerns.
The company should also have records that indicate that the company does satisfy all aspects of its operation and these aspects are such as, the historical requirement that provides that a company should be run in accordance with the company’s historical set standards. Impartiality should also be a driving force. There should also be policies that ensure that the participants of a company are sensitive to all the illegal and unethical behaviors that could arise.
A company should also have an ethical advisor who provides guidance in the company and who initiate an open discussion between the management and employees. An employee who raises ethical concerns or even a member of the management should also not be retaliated against instead there should be corrective measures brought against them.
Work Cited
McKenzie, Sheary. Environmental Ethical Issues soc120: Introduction to Ethics &
Social Responsibility (abj1028h), 2010, p 6-9. Read More
Share:
Tags
Cite this document
(“Business LAW Essay Example | Topics and Well Written Essays - 500 words - 1”, n.d.)
Business LAW Essay Example | Topics and Well Written Essays - 500 words - 1. Retrieved from https://studentshare.org/law/1584664-business-law

CHECK THESE SAMPLES OF Business LAW

...BUSINESS LAW Before the Uniform Commercial (UCC), and the Uniform Computer Information Transactions Act (UCITA), what was one of the first, andmost significant, of the U.S. governments attempts to promote uniformity in commercial laws from state to state? Historically, commercial laws have taken on new faces for centuries. However, the onset of the strengths of the U.S. Congress allows states to regulate commerce law. One of the first and most effective attempts at commerce regulation can be dated back to the Constitutional Convention described under specific origins in a proposal offered by Madison and John Tyler in the Virginia assembly that the...
2 Pages(500 words)Essay
sponsored ads
Save Your Time for More Important Things
Let us write or edit the essay on your topic "Business LAW" with a personal 20% discount.
GRAB THE BEST PAPER

Let us find you another Essay on topic Business LAW for FREE!